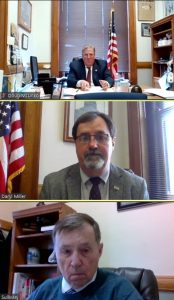 Bradford County veterans affairs director Pete Miller (below) spoke at the Thursday morning meeting of the Bradford County Commissioners about changes for the next round of Hometown Heroes banners to be hung from utility poles in Towanda. 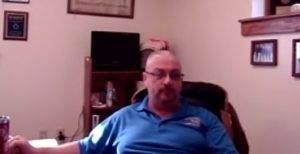 The current banners have been displayed for five years or more, and many are showing signs of wear. The banners were originally expected to last about three years before being returned to their families. The individual who previously coordinated the campaign has retired and moved from the area, so Miller is rebooting the program with a significant change.

This year, first responders (fire fighters, ambulance drivers, EMTs, etc.) are eligible for recognition as hometown heroes alongside military veterans. Applications are available at https://bradfordcountypa.org/department/veterans-affairs/ by following the Hometown Hero links. The cost has been reduced to $60 per banner. The current banners will be taken down and made available to family members through the American Legion some time in June. Miller wants the new banners up before Memorial Day weekend.

While the banners will be exhibited only in Towanda, the offer is open to the entire county. “There are several municipalities that run their own banner projects,” Miller noted. “This gives them the opportunity to highlight their hometown heroes here in Towanda (the county seat).” For those who are renewing old banners, Miller requested new photos to produce the highest quality image on the banner as possible.

The commissioners and Bradford County planning and public safety director Matt Williams have been working closely with Dr. Joe Scopelliti, president and CEO of Guthrie Sayre, since the coronavirus pandemic began and will coordinate a question & answer session about the virus and the vaccine at their next public meeting on Thursday, Feb. 11.

“We will take questions over the next two weeks from Facebook and the website,” commissioner chair Daryl Miller explained. Either Scopelliti or another qualified physician will attempt to answer the most common 10 to 20 questions about the vaccine and the vaccine process, Miller noted.

“Dr. Scopelliti has been talking with us every week,” commissioner Doug McLinko remarked, as he encouraged the public to take advantage of the special session. “You will learn a lot.”

In the meantime, Williams (below) and the commissioners shared some thoughts about the current COVID situation and the ongoing vaccination process. 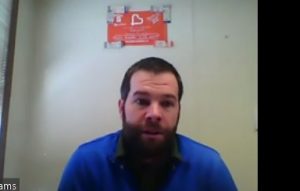 Williams advises those who “are on the fence and unsure of taking the vaccine” to do their research and make a definite decision before it is their turn to get the shots. “It’s kind of like a lottery at this point as to when it shows up,” he said of the batches of vaccine distributed by the Pennsylvania Department of Health (DOH). To those who do not make up their minds by the time their age or occupational group is deemed eligible, he cautioned, “It’s likely that you will be left behind in this whole deal.”

McLinko admitted that he initially had reservations about the vaccine but has had most of his concerns addressed. “I didn’t understand the vaccine, but I’m going to get it as soon as it is available to me,” he remarked. “There’s been a lot of misinformation about it.”

In general, Williams lamented that getting real information in a timely manner is still hampering the vaccination process. “Too many updates occur at the last minute,” said Williams. “We are finding some things out from social media before we get official information.”

Commissioner Miller related that there are two, parallel vaccine plans underway in county – one through Guthrie and another through registered pharmacies. Both are still targeting the 1A group, which includes all front-line workers and most people over 65.

Rite Aid Pharmacy, Williams noted, is now taking registration through the DOH web portal (www.health.pa.gov/topics/disease/coronavirus/Vaccine) as vaccines become an available. He also expects the state to start expanding its mobile vaccine clinics to include Bradford County residents. “I think things will be better off ahead in the spring and summer,” Williams stated.

“The infection rates seem to be coming down,” Miller added. “Hopefully, with the vaccine and other measures, we can start to put this behind us.”

Though Williams was questioning Guthrie’s decision late last week to also vaccinate residents of New York’s southern tier, where doses are also in short supply, he praised the efforts of Guthrie administrators in today’s meeting. “When they do have doses left at the end of the day, they have people who they can call in to make sure that they are used,” he said.

Williams is also hopeful that some new vaccines coming down the pike will help the county move a lot more people through the process more quickly. Some of the new vaccines – not yet approved – only require one dose, unlike the Moderna and Pfizer vaccines that require two doses within three weeks.

A dozen staff changes at the Bradford County Manor were approved by the commissioners, as per the recommendation of Manor administrator James Shadduck. Commissioner Miller maintained that there was no coordinated reassessment of staff to justify the shuffling of the deck. “Unfortunately, it’s just normal turn over – people changing jobs or coming back,” he stated.

McLinko suggested that it was more likely the result of the nursing staff becoming more stabilized and other support staff positions settling in.

On the topic of front-line workers, McLinko noted that the past week has been especially difficult for first responders with a rash of deadly vehicle accidents and major fires being reported, and asked those in attendance to keep all front-line workers in their prayers. 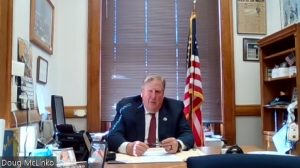 A cost of living increase for eligible retirees was proposed as per the agenda but voted down unanimously. “A two percent increase would cost us a million dollars, so it’s hard to increase it,” McLinko stated. “It’s not like we’re being harsh. It wasn’t set up that way. It was set up for longevity.”