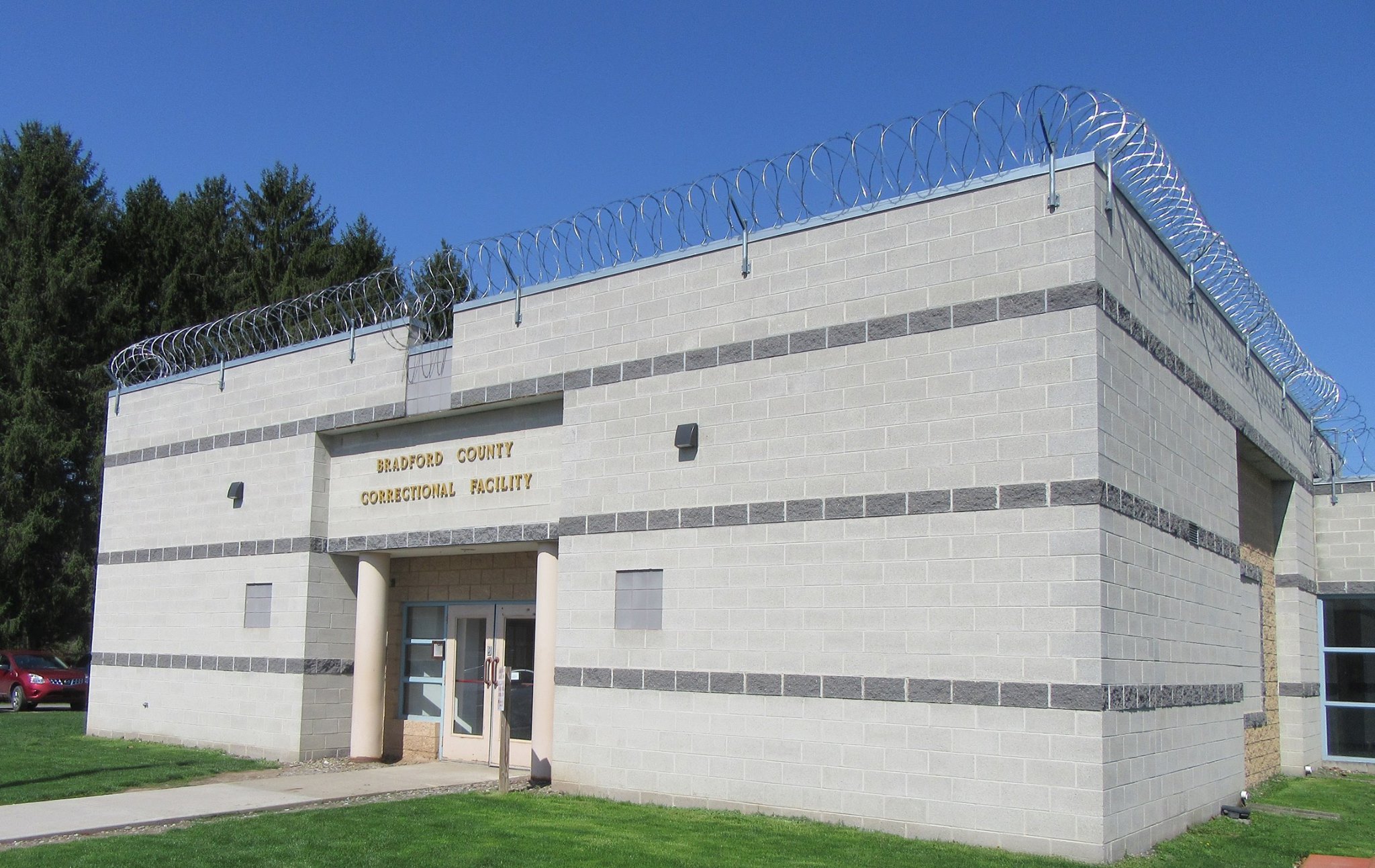 Members of the Bradford County Prison Board, including (above, clockwise from left) Commissioner Daryl Miller, Sheriff C.J. Walters, Warden Don Stewart, Commissioner Doug McLinko, Commissioner Ed Bustin and (below, from left) Deputy Warden Pete Quattrini and District Attorney Dan Barrett, met at the Bradford County Correctional Facility (top) in Burlington Township on April 13 and partook in a heated discussion about the county’s response to beefed-up enforcement of federal immigration laws. 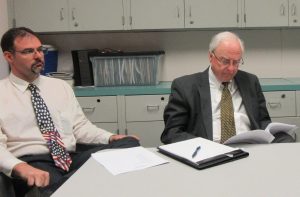 Despite discussing publicly just a few months ago that Bradford County is NOT a “sanctuary county,” members of the prison board found themselves scrambling this morning for a way to take themselves off an updated Center for Immigration Studies (CIS) map (below) that highlights Bradford County among 17 counties in the Commonwealth that could be denied state and federal funding. 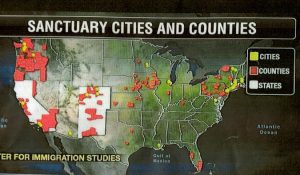 The problem apparently stems from a decision in 2014 to adopt a policy recommended by CCAP (County Commissioners Association of Pennsylvania) and county solicitor John Foster Sr. designed to save municipalities from fighting legal battles over unwarranted detainment of anyone whose immigration status was in question. The policy was drafted after the detainment of a suspected illegal alien in Lehigh County who was found to be an American citizen.

Since the inauguration of President Donald Trump, U.S. Immigrations and Customs Enforcement (ICE) has been warning officials in states, counties, and cities that harbor illegal aliens that they will lose federal funding for law enforcement and correction facilities. Many states have followed suit. Commissioner Doug McLinko was alarmed to learn that Bradford County was still on the list and went into this morning’s prison board meeting determined to fix it.

“I could have called for an executive session,” McLinko noted, in reference to allowing members of the media to stay in the room. “But this has already been in the press, so I thought it should be aired out.” And so it was. (President Judge Maureen Beirne was brought into the conversation via conference call from the courthouse.)

The 2014 policy dictated that the Bradford County Correctional Facility could not keep a suspected illegal immigrant beyond “probable cause” unless they could obtain a warrant or detainment order signed by a judge. According to the new rules, McLinko related, “We have to honor all warrants signed by an ICE official – not just a judge. If we get a detainer from anybody in immigration, we have to honor it.”

Warden Don Stewart had copies of paperwork concerning the only arrest in Bradford County since 2014 that required such action by prison officials.

One of the questions asked of any intake, Stewart explained, is “Where were you born?”

“If the answer is anywhere outside the U.S., we have to contact immigration,” said Stewart, noting that prison officials did so in the case cited. “It worked. Immigration got their guy.”

The problem as seen by the government, Stewart surmised, is that suspected illegals in self-proclaimed sanctuary cities are released before immigration officials have time to act, which Stewart doesn’t see as a problem in Bradford County.

“There’s no way that we are going to have anybody in here that they want that they’re not going to hear about it,” he maintained, adding that authorities would be notified almost immediately. “We don’t wait until the last minute.”

“My point is, that if an ICE agent showed up and asked for someone to be detained, would you keep him?” Commissioner Ed Bustin countered.

“No,” Stewart replied, honestly. “I’m not authorized to do that without a judge’s signature.”

“So, nothing has changed except the political climate,” Bustin remarked.

McLinko remained adamant that the language of the 2014 policy be changed to address the new requirement that orders from both judges and ICE officials be honored. Stewart cited a change in reference from “Request for Voluntary Transfer” in the 2014 policy to “Notice of Action” in the new ICE regulations.

“I want our policy changed,” McLinko stated. “We have the language to change it, and I make a motion that we change it.”

After a long moment of silence, Sheriff C.J. Walters seconded the motion.

Before a vote could be taken, Bustin recommended that McLinko’s motion be rescinded. He suggested, as an alternative, that the prison board “work with the solicitor on the language to make sure that we are not violating someone’s Fourth Amendment rights.”

District Attorney Dan Barrett joined the conversation by explaining that the CIS is a non-governmental agency that sets its own standards and makes its own calls.

“I don’t know that that should drive our policy,” Barrett pondered aloud. “ICE is saying that they want us to hold onto people two or three times longer than we have the authority because they don’t have enough judges. It appears that we may be taking on some risk.”

“They’re going to ask us to assume the liability because they can’t do their jobs,” Bustin concurred.

“I’m willing to do that for the safety of the people,” Walters replied.

Judge Beirne spoke up and suggested a compromise. “Why can’t we go back to our previous policy?” she asked the board. “Why should we have to have some kind of proactive policy? Why can’t we just rescind the 2014 policy? It’s only because of that 2014 policy that we are here.”

“We’re asking our employees to do something that we know isn’t right,” Bustin maintained, proposing a scenario of a suspected illegal alien being brought in on a Friday, when tracking down a judge can be more challenging, and being held over the weekend due solely to ICE regulations. That, Bustin implied, would be a violation of the the Tenth Amendment, which prevents the federal government from imposing its will on the states.

McLinko rescinded his original motion, but entered a new motion to rescind the 2014 policy as per Beirne’s suggestion. She seconded the motion.

Walters called for a vote and received six “ayes” to Bustin’s sole “nay,” and the motion carried.

Before the prison board meeting was adjourned, McLinko reported to the media participants that Walters had sought enrollment of Bradford County in the federal 287 (g) Program, through which an undetermined number of deputies and prison officials could be cross-designated as ICE agents.

Though he admitted that the announcement was a bit premature, Walters explained that the benefit to the county is that these officials would have instant access to the national ICE data base should a need occur. “We would be able to move a lot faster if somebody is eligible for deportation.” said Walters, adding that two county deputies are already cross-designated as Fugitive Task Force agents.