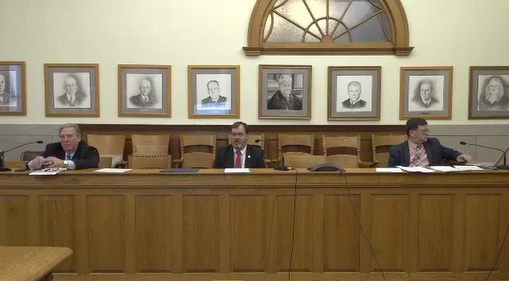 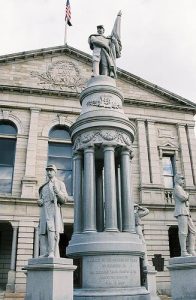 Though some technical difficulties delayed the start of the Bradford County Commissioners meeting on Thursday morning, they continued their series of live, online presentations from courtroom #2 at the courthouse in Towanda. Accessible on their Facebook page, BC Commissioners, the platform also allowed them to respond in real time to questions as viewers submitted them.

Understandably, the majority of the questions were related to the COVID-19 crisis and how it affects almost every aspect of life. But the commissioners got a number of pressing agenda items out of the way before focusing on those concerns. Though the Bradford County Library system is currently limited to online programming, the commissioners proclaimed April 19 to 25 as National Library Week in Bradford County. They also issued a proclamation citing April 12 to 18 as Telecomunicators Week.

The county reached new agreements with Teamster Local Union 529 in an effort to reclassify corrections and probation officers under a Public Safety category that also includes sheriff’s deputies, and 911 staff. A five-year contract includes an immediate seven percent salary increase and subsequent raises of two percent per year.

“It’s an attempt to bring all of those sectors of the county under the same classification,” said commissioner Doug McLinko. “These people have the training and the education and do a very dangerous job.”

“Most of the uniformed staff is covered now,” commissioner Ed Bustin added.

The commissioners approved a request from the Endless Mountains Heritage Region for a letter of support for ongoing activities and community outreach, as well as enhancements to parks, trails and other heritage attractions. McLinko praised the organization’s efforts in Bradford County and the leadership of EMHR executive director Cain Chamberlin. The letter will be forwarded to the state’s Department of Conservation & Natural Resources along with the EMHR’s application for funding through the DCNR’s Community Conservation and Partnerships Program.

In response to a question from an online viewer as to why internet was not available on her rural road, the commissioners restated their goals for the installation of three fiber optic loops and transmission towers upon which internet providers can build out to extend service to all county residents.

“Why you can’t get the service that you want today is due to a lack of interest by the providers,” Bustin suggested. “Somebody doesn’t think that they can make enough money in your area.”

The funding that has been appropriated by the commissioners so far is focused first on enhancing 911 and emergency communications services. When completed, commissioner chair Daryl Miller noted, internet providers will also be able to use the new infrastructure as well.

The stay-at-home orders from the governor, McLinko continued, make the importance of a better system obvious, with so many adults and school-age children trying to do work from home and either not being able to get online or being dropped.

The remainder of the questions dealt with various aspects of the COVID-19 health crisis. They are summarized here in the order that they were answered:

Will a curfew be implemented in Bradford County? All three commissioners indicated that there are no plans to proclaim nor attempt to enforce a curfew at this time.

“I don’t see the circumstances necessitating such a move,” Bustin remarked, agreeing with McLinko and Miller that continuing with sanitary practices and social distancing is producing results and remains the most practical approach.

“Once we open back up for business,” Miller suggested, “there will be a new order for society and how we go about reacting to each other.”

Why is Guthrie not reporting all coronavirus cases? The commissioners admitted that Bradford County does not have the same access to the data behind the numbers that might be available in more populated counties.

“We just don’t have that option. We have to look at large data sets and respond accordingly,” said Bustin. “And you’ve got to consider the fact that health care facilities are not going to see most of the people who would test positive.”

Will you offer an extension on property taxes? “No,” McLinko quickly replied, “because there are already safeguards in place if you can’t pay it on time.”

What services and resources are available for those who are self-employed? Miller noted that the plans for helping small businesses and independent contractors is continuously evolving. He recommended looking to federal and state websites, including that of U.S. Congressman Fred Keller.

Financial institutions are also pooling resources and creating new programs. “Call your bank and do it soon,” McLinko advised. “It’s not an endless pot of money.”

“And stay tuned to our Facebook website,” Miller added. “We are trying to push out as much information as it becomes available to us.”

Do the commissioners plan to furlough any county employees? Not at this time, Bustin responded. “Most of our employees are working from home or in their offices to keep up essential services,” he stated, adding that a meeting was slated for later Thursday afternoon to reassess the situation and make appropriate decisions.

Will prisoners who test positive for COVID-19 be released from jail? No, said Miller, noting that the one positive inmate is being quarantined in place.

“The best place for prisoners is in jail,” McLinko remarked. “We have a great staff over there.”

Is there any way to get tested without checking into the ER? Bustin advised contacting one’s personal physician or health care provider if they believe they might have the virus. “They will not do that at the ER,” he maintained, recommending that people take care of themselves at home if they only have light symptoms.

In conclusion, Miller stated, “Our emergency operations center is continually monitoring the situation. I like to believe that what we’ve done so far has been a help. As we go forward, we can’t take our foot of the accelerator of practicing the known things that will stop the spread of the disease.”

In the meantime, McLinko expressed hope that the federal government will develop quicker testing and treatment that can be implemented right down to the local level.

The Bradford County Commissioners will conduct another public, online meeting on Thursday, April 16 at noon on the BC Commissioners Facebook page.