Bradford County Dairy Princess Has Eye on the Future

The Northeast Hall at the Pennsylvania Farm Show Complex was teeming with dairy royalty on Jan. 12, when at least six PA Dairy Promotion Princesses representing a large swath of the state worked together to staff the Dairy Promotion exhibit. Among them was Rachel Jelliff, Bradford County’s Dairy Princess.

Rachel is a junior at Athens Jr./Sr. High School and lives on a fourth generation dairy farm in Ridgebury Township with her parents, Greg and Michelle Jelliff. She also works at Pennvale Farm in Springfield Township. Her three brothers, Andrew, Caleb, and Luke have also been involved in farming since their teens.

Rachel has participated in 4-H since the sixth grade and the Athens FFA for three years, currently serving as president. She is a member of the four-member Dairy Bowl team and is looking forward to a state-wide competition in Pittsburgh in February. This is only her second year working with Bradford County Dairy Promotion, having served as a Dairy Ambassador last year until she was crowned Dairy Princess in June.

In her new capacity, Rachel has been given many opportunities to attend meetings of chamber organizations, municipalities, and civic organizations. She also speaks to school children on occasion. Each engagement helps her build her Dairy Promotion resume so that, one day, she too can run for a state title.

“I like to go around and meet other dairy princesses. We all have the same passions,” Rachel stated, adding that larger events like pageants and the Farm Show are her favorites. “I don’t get to see as many farmers at home, so it’s nice to get to see people here with similar interests.”

The Northeast Hall is a popular junction in the Farm Show Complex. Not only are there smiling teens wearing tiaras, which is sure to catch the attention of children passing through, the Farm Show’s Calving Corner, where very expectant dairy cows are on full display as an equally expectant crowd awaits the new arrivals.

The number of families attracted to the Hall presents the perfect opportunity for the Dairy Promotion team to share their knowledge about milk and its role in a well-balanced diet but also the importance of dairy farmers in meeting that demand for consumers in Pennsylvania and beyond. The Commonwealth currently ranks seventh in milk production in the United States, with about 474,000 cows producing 10.6-billion gallons of milk annually.

Colorful displays and hands-on activities are employed to help the princesses spread the message of dairy, address misconceptions about milk, and teach family members of all ages how milk gets from the cow to the table. 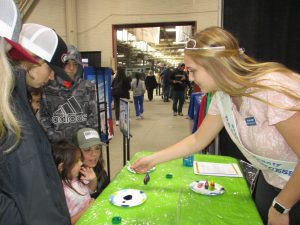 One game allowed children to take guesses at questions about dairy nutrition and lift a flap to see if their answers or guesses were correct. In the past few years, the American Dairy Association has increased the number of vital elements in milk from nine, iodine, potassium, selenium, and zinc iodine, potassium, selenium, and zinc to the commonly known list of vitamins considered contributing factors to health maintenance.

She was currently at a table where she was helping family members understand the different between real milk and products like soy milk and almond milk that sound like dairy but are not.

Unlike other youth groups like 4-H and FFA that were represented at the Farm Show, Dairy Promotion participants don’t necessarily “age out” when they leave their teens. In fact, Rachel can continue her pursuits with the organization until she is 24. She plans to go to college to study to become a veterinarian.

Rachel was one of many Farm Show participants this year who was wearing two or more hats. On the two days that she was there, she split her time between the Dairy Promotion exhibits and working in the Main Hall with her father, Greg Jelliff, and grandmother Roberta Jelliff at exhibits coordinated by the Pennsylvania Maple Syrup Production Association.

(A feature story about the Jelliffs and other Bradford County maple producers was published in the Jan. 13 edition of The Daily Review, or click here: http://www.endlessmtnlifestyles.com/bradford-county-well-represented-among-maple-producers-at-farm-show/.)