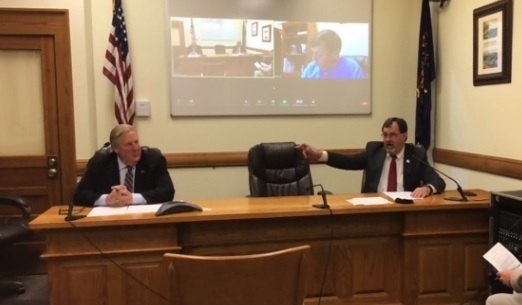 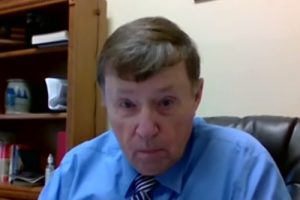 Participants in the Nov. 12 meeting of the Bradford County Commissioners included (top, left) Doug McLinko and Daryl Miller and (above) John Sullivan.

The Bradford County Commissioners made their proposed budget for 2021 available for public inspection today, discussed a number of public works projects for the coming year, and announced that current county planner Matt Williams will henceforth serve as public safety director as well. Agenda items for the Nov. 12 public meeting also included numerous contract renewals as a matter of “housekeeping” to wrap up 2020.

Though the new position of Planning and Public Safety Director will save the county some money, commissioner chair Daryl Miller noted, “That’s not why we did it. It has already been a collaborate effort over the years. It was a natural migration to overlap those positions.”

“Matt brings an exciting new skills set to it for grant funding and more detailed funding,” commissioner Doug McLinko added. “It takes a team leader to bring it all together.”

Williams has served as county planner since 2016 and will now also oversee 911 and EOC operations, which will soon be moved to the new Bradford County Public Safety Center nearing completion in North Towanda Township. His team will include emergency management director Sarah Neely and 911 communications director Rob Repasky.

“A lot more skill sets are needed than ever before,” McLinko continued. “Matt has a great grasp on the technology up there, combining GIS with emergency situations.”

“Many people don’t realize that, during EOC activation, the Planning Department essentially ceases all normal operations to provide technical support to the response effort,” Williams explained via email after the meeting. “This would include operational planning assistance with mapping support during an active response, then assistance in recovery efforts including grants management and preliminary disaster assessments.” The public safety director position was most recently held by Bob Barnes, who retired a second time on Oct. 30.

Williams said that Barnes’ “contributions have been enormous in better preparing our communities for disaster response. This is especially true for our first responder community, where his experience will be hard to replicate.” McLinko noted that Barnes will continue to avail himself for a while to ensure a smooth transition of the departments.

The projected $78-million budget includes about $11,500,000 earmarked for a number of capital projects, many of them already underway, and $400,000 for first responder units. (The entire document will be available for public review for 20 days and, barring any changes, will be approved at a commissioners meeting on Dec. 10.)

Three new telecommunications towers are planned in the areas of Camptown, East Smithfield, and Ridgebury for the purpose of filling in “gray” and under-served areas of the county. “With the new towers, we will be able to push cell services out into more remote areas of the county,” Miller added.

Another tower will be erected across the Susquehanna River at a site on East Towanda Hill referred to as the Foster Tower. The new tower will replace the billboard-looking structure that currently reflects emergency communications signals from the EOC to a tower on Kellogg Mountain with a permanent link.

A new, modest building will be constructed there as well to serve as a backup command center should communications at the future Public Safety Center be disrupted for any reason. “Hopefully, it never happens,” Miller remarked. “But, if we have to move our dispatchers from the safety center, we will be able to dispatch from the new building.” He expects both projects to be completed in early 2021.

One more agenda item that addressed emergency preparedness in Bradford County was the county’s renewal of its Code Red subscription for another three years. Commissioner McLinko encouraged all county residents to sign up for the free service, which has been enhanced with IPAWs technology to effectively integrate local emergency communications with FEMA’s Emergency Alert System, National Warning System, Wireless Emergency Alerts, and NOAA Weather Radio.

Under extreme circumstances, messages can be sent to every device in an affected area, including land lines. Bradford County EOC can override the national system whenever it is necessary to focus communication on a particular area, Williams related, citing tornadoes, flash floods and active shooters as applicable scenarios. Interested readers can sign up or update their contact information here: https://public.coderedweb.com/CNE/en-US/E05F45D0FC38.

Bridge rehabilitation will continue in 2021 as the Planning Department puts out for bids on a newly bundled set of projects. Bundling of contracts began several years ago in an effort to get more bridges done in a shorter time span by fewer contractors. It has already saved the county millions of dollars, Williams noted, and cut the original list of 26 structurally deficient bridges in half. Bridge #36 on Edinger Hill Road in Tuscarora Township could be completed before the end of the year if township supervisors allow for the temporary closure of the road.

Also on the capital improvements list is the renovation of the former Ben Franklin store at the corner of Main and Park streets in Towanda. Exterior work has already started and, on Nov. 12, the commissioners awarded a contract to AFT Mechanical to do $25,480 in plumbing work. When completed, the Sheriff’s Department and Bradford County Domestic Relations will relocate there. The Elections Department will remain in the annex on the south side of the courthouse, but election equipment will be stored in the new building, where the machines will be calibrated and certified and elections officials trained to use them.

Jail Continues to Hold Off COVID

In a brief meeting of the Bradford County Prison Board held after the regular meeting, Warden Don Stewart reported that three correctional facility employees who had tested positive for the coronavirus since last month’s meeting have since returned to work. Two corrections officers had been infected while on vacations and self-quarantined until their results were negative. One party, Stewart noted, works “outside the jail,” though he could not be specific about the person’s duties for privacy reasons.

“We did contact tracing, and the close-contact people tested negative,” Stewart explained. “There was no exposure to inmates.”

There have been no cases of COVID inside the prison at Burlington since the pandemic began. Prisoners are tested prior to being sent to other facilities. Routine measures include the use of PPEs, proper social distancing and housekeeping. There are currently 146 inmates in the system, including 115 males and 28 females. There are presently two openings at the jail for corrections officers.

The commissioners had planned to raise flags at the new Safety Center on Nov. 11 in honor of Veterans Day but postponed the event due to rain to Friday, Nov. 13 at 10 am. Because construction is ongoing, there will be no tours of the facility offered at this time.

The next public meeting of the commissioners that would have been held on Nov. 26 has been rescheduled to Thursday, Nov. 19 due to the Thanksgiving Holiday.

(A recording of the entire meeting will be accessible on the BC Commissioners Facebook page later today.)

2020-11-12
Previous Post: Several New Laws In Place To Assist Veterans and Military Families
Next Post: Montrose Septic – Providing a Convenience We Can’t Do Without