BradCo Commish on COVID-19: “Act As Though Your Neighbor Has It”

Bradford County Commissioners (above, from left) Doug McLinko, Daryl Miller, and Ed Bustin observe a moment of silent reflection at the start of their March 26 meeting from the courthouse in Towanda, which was live-streamed on the internet.

The Bradford County Commissioners held their first virtual public meeting this morning with a live broadcast on the BC Commissioners Facebook page. At one point, more than 130 people were following the live-stream, which would translate to record participation under better circumstances. As chairman Daryl Miller (below) explained in his opening remarks, the new format was a response to a need to keep the public informed while maintaining a safe distance due to the COVID-19 epidemic. 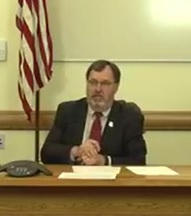 Not surprisingly, most of the questions from the press and public directed at the commissioners focused on the health crisis, and the commissioners answered as many as they could. One question posed by many Bradford County residents surrounded the report of one confirmed COVID-19 case in the county and a feeling by many that the location of that individual should be disclosed as a matter of public safety.

Though their answers varied, the sentiment of the board was unanimous. 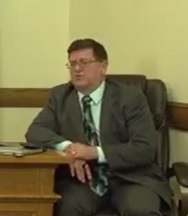 “I can’t understand why anybody who tests positive would be treated differently,” said commissioner Ed Bustin (above). “I don’t need to know who’s positive because I’m not going to put myself into close contact with anybody.”

“People can carry it and not even know,” commissioner Doug McLinko (below) added. 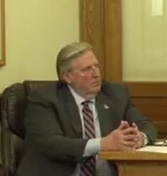 Just as importantly, the commissioners concurred, they do not know who the quantified positive person is nor where he or she resides, other than having been told that the person is self-quarantined. In answer to a reporter’s question, the confirmation of one case in the county (actually two as of noon Thursday) does not change anything county officials are doing from an operational standpoint.

“We will continue to move forward in a methodical fashion and take precautions to keep everyone safe,” Miller stated.

Another reporter asked if public officials should disclose if they have tested positive. Again, the commissioners were in agreement that, while there is no established protocol, each of them would “self-declare” and “self-isolate.”

While not within their power to affect, the commissioners addressed questions about special hours for seniors to grocery shop, a perceived food shortage, and anticipated monetary assistance for small businesses and suddenly unemployed people.

Most grocery stores and pharmacies are opening early to allow seniors to shop when the shelves are newly stocked, they noted. “There is no shortage of food and other items reaching the stores,” Bustin maintained. “But people are emptying the stores…if we just take everything we see just because we want it, you’re not helping anybody.”

The state’s Small Business Association is offering low-interest loans to keep businesses afloat. McLinko expressed hope that individual checks will be mailed shortly as part of the federal stimulus packages and urged self-employed individuals to study the bill carefully to learn how to get benefits.

“I think we need to be looking forward to the long term – to the back side of this when we can start making money again,” said McLinko. When the county can see the light at the end of the tunnel, he continued, the Progress Authority will help to take the lead to get businesses back on better footing

Nonetheless, he cautioned, “Government can’t be the answer to everything. Take it upon yourself to look after friends and neighbors and family. The world is going to change. Maybe a lot of good will come from this.”

At Towanda, the courthouse is open for essential business only while more than 100 county employees are working from home. One person comes in daily to disinfect offices and sanitize surfaces. County parks will remain open, but camping will not be allowed until at least May 15.

According to Miller, the partial closure of the courthouse and parks for safety reasons are the only actions that the commissioners have taken as a direct result of their Emergency Declaration of March 14. Miller also noted that people who have already started paying camping fees can opt to have their money returned or the remaining balance can be prorated once the parks reopen.

The parks are traditionally open for camping in April for trout fishing, which will still permitted, Bustin explained, but without overnight accommodations. “We still encourage people to maintain social distance, but the parks are open for people to get some fresh air and recreation,” he remarked.

McLinko suggested that those who are severely impacted by the COVID-19 disruptions take a proactive approach to an inevitable financial pinch. “If you’ve lost your job or have been laid off, call your landlord now and let them know that you are struggling. Don’t wait until you fall behind,” he cautioned.

Miller added that several utility companies have suspended disconnections and late fees because of the work stoppage that is in place. “We hope that this is going to be a short-lived event and that we will get back to business as usual,” said Miller. “Our thoughts re will those who have family members who are the most impacted.”

As per the agenda, the commissioners named the Department of Community and Economic Development as the base agency for ARC funding for phase 2 of the county open access fiber project. While it will only cover an unspecified portion of the ongoing effort by the commissioners to get broadband internet to county residents, they agreed that the present health crisis amplifies the need to bring the project to fruition.

“During this crisis, we are seeing the importance of broadband,” McLinko stressed. “We have students who are home who can’t get online to do their school work. So we’re going to do everything we can in our power to get this done and get broadband for our entire county.”

“It’s absolutely critical that we move forward with this project,” Miller agreed.

Bustin added that the commissioners started asking two years ago for state and federal funding and were turned down each time. “In my opinion, if we’d gotten response to the government prior to this, I believe that we would have access for our students today. We believe that we have found the solution for Bradford and other counties. We need them to acknowledge that.”

The live meeting was well-received judging by the comments posted to the commissioners by Facebook users once it had ended.

For continuous updates on the county’s response to the COVID-19 crisis, the commissioners encouraged viewers of the broadcast to follow BC Commissioners on Facebook and log in to

Www.bradfordcounty.org, where a answers to frequently asked questions and a list of food pantries and schedules will be accessible.