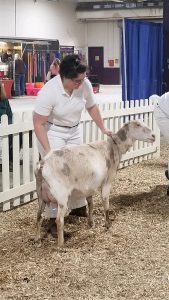 The PA Farm Show competition among dairy goats was stiff for 4-H participants across the state including, Hannah Foster (top, far right) and Geo Swartley (second from right), both members of the Borderline Community 4-H Club of Friendsville. Hannah Foster’s doe Dapples (above) took first in the 2-to-3-year old class.

One of the most remote 4-H clubs in the state has also been the one to submit the most entries to the Family Living division of the Pennsylvania Farm Show. In the past few years, members of the Borderline Community 4-H Club of Friendsville has also begun showing dairy goats and helping Farm Show officials highlight dairy goats as their production grows to fill a niche in the Pennsylvania agricultural spectrum.

Borderline 4-H is led by Mike and Jill Swartley, who have as many as 50 goats at a time on their northwest Susquehanna County farm. In recent years, they have shared their passion for raising goats with other area youths who fill the roster of a vigorous club that expands well beyond their own two sons, Zeb and Geo.

Zeb aged out of the club last year, after racking up impressive wins with his goats and projects at the Harford Fair and the Farm Show. His brother, Geo, now 18, is following close behind in his seventh year in the program, currently serving as the club’s vice president and experiencing his best year yet at the Farm Show. The 15 members of the Borderline Community 4-H Club meet once per month but are busy all year.

Jill grew up in Wisconsin, where the path for 4-H members from the local to state level was well-defined. As a youth, Jill looked forward to taking her projects to the Wisconsin State Fair in Milwaukee, which she remembers as “super competitive.”

As Pennsylvania does not have an official state fair, Jill looked to the Farm Show in Harrisburg about 12 years ago as the best way to get her club members’ projects to a state-level of competition. The Family Living division was best suited for the types of projects pursued by the youths in Friendsville, with categories as diverse as photography and scrapbooking, woodworking and rocketry.

Each new year was a learning experience for Jill and the club members who were able to attend. It was a number of years into their participation, Jill recalls, when one of the women who coordinate the Family Living division ask her, “Do you know that your little club brings more projects to us than any other?”

Jill was aware that the Pennsylvania Farm Show Scholarship Association awards thousands of dollars each year to students taking up ag-related studies at schools in Pennsylvania. “We thought you had to show livestock to be eligible,” Jill noted, so they decided to start taking goats to what she learned is one of the largest goat shows in the state.

As it turns out, the Family Living department also contributes to the scholarship fund, and youths who only submit projects are eligible. Nonetheless, the Borderline 4-H members were already hooked on showing goats and other animals, and Zeb picked up a scholarship in 2017 to apply to his tuition at Penn State where he is currently a junior pursuing a degree in chemical engineering.

Geo credits his mother for bringing in new members and keeping the club so progressive. Amy Foster, mother of club member Hannah Foster agrees. This year marked Hannah’s fifth trip to the Farm Show, where she showed dairy heifers for two years until Jill steered her to goats. The Montrose High School sophomore has several goats in her name at the Swartley Farm and now keeps a few at home. “We are not farmers, so this was a learning curve for us,” Amy conceded.

Amy credits 4-H for providing a valuable set of life skills for youths like Hannah. “They gain a sense of responsibility by taking care of something other than themselves,” said Amy. “Even if they are not doing animals, there are deadlines that they have to meet for their projects.” Hannah served as treasurer for the Borderline Club for two years, and added the role of secretary this year, helping her to hone record keeping skills and speaking in front of people.

Hannah and Geo had two great days showing goats at the Farm Show this year, both garnering best of breed for their LaMancha goats, Dabbles and Ginger Ale, and additional ribbons for the other four goats they took to the show. Hannah also got a first-place ribbon for a wood-framed mirror that she had constructed at school, as well as second-place finishes for her dairy goat project journal and a tri-fold dairy goat poster. She scored third for her wood projects poster and a birdhouse she had constructed.

Joining Geo and Hannah in Harrisburg were club members Abby Pettyjohn and Nate Pettyjohn. Abby scored second-place ribbons for both art projects that she submitted, and Nate took a third-place for the journal he submitted as president of the Borderline 4-H Club. The Club garnered a first-place win in the tri-fold community poster contest, which Nate, president of the club, designed.

As the club gains stature at the Farm Show, Jill was asked this year to be a more active part of opening ceremonies on Jan. 11, which were attended by Gov. Tom Wolf and secretary of agriculture Russell Redding. Last year, they were asked to be part of the Promote the Goat booth, which had previously only showcased fiber and meat goats.

Geo related that spending two days at the PA Farm Show allowed him to take in more exhibits and get a better sense of the diversity of people that make up the ag community. “It helps me to work with other people and make new friends,” he remarked, adding that he like this year’s butter sculpture and the “make your own whoopie pie” booth. 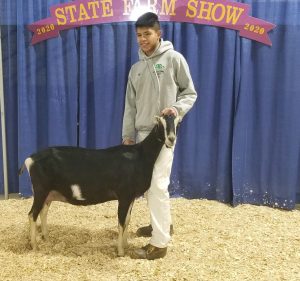 Geo Swartley’s goat Evelyn scored a number of wins at the PA Farm Show, including a Best of Breed on Jan. 11.