Biggest Storm of the Season May Be Upon Us Tomorrow 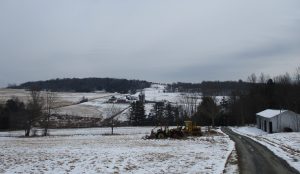 Tuesday’s snow may already be a distant memory in the river valleys, but there was still plenty of snow in the Irish Hill section of Susquehanna County on Friday morning, ahead of a vigorous storm system that will affect the region from tonight through Saturday evening.

March has already been typically fickle with near record highs around 70 this past weekend and other nights closer to 10.

A winter storm warning is currently in affect that will begin as rain during the overnight hours but quickly transition to heavy bands of snow accompanied by high winds.