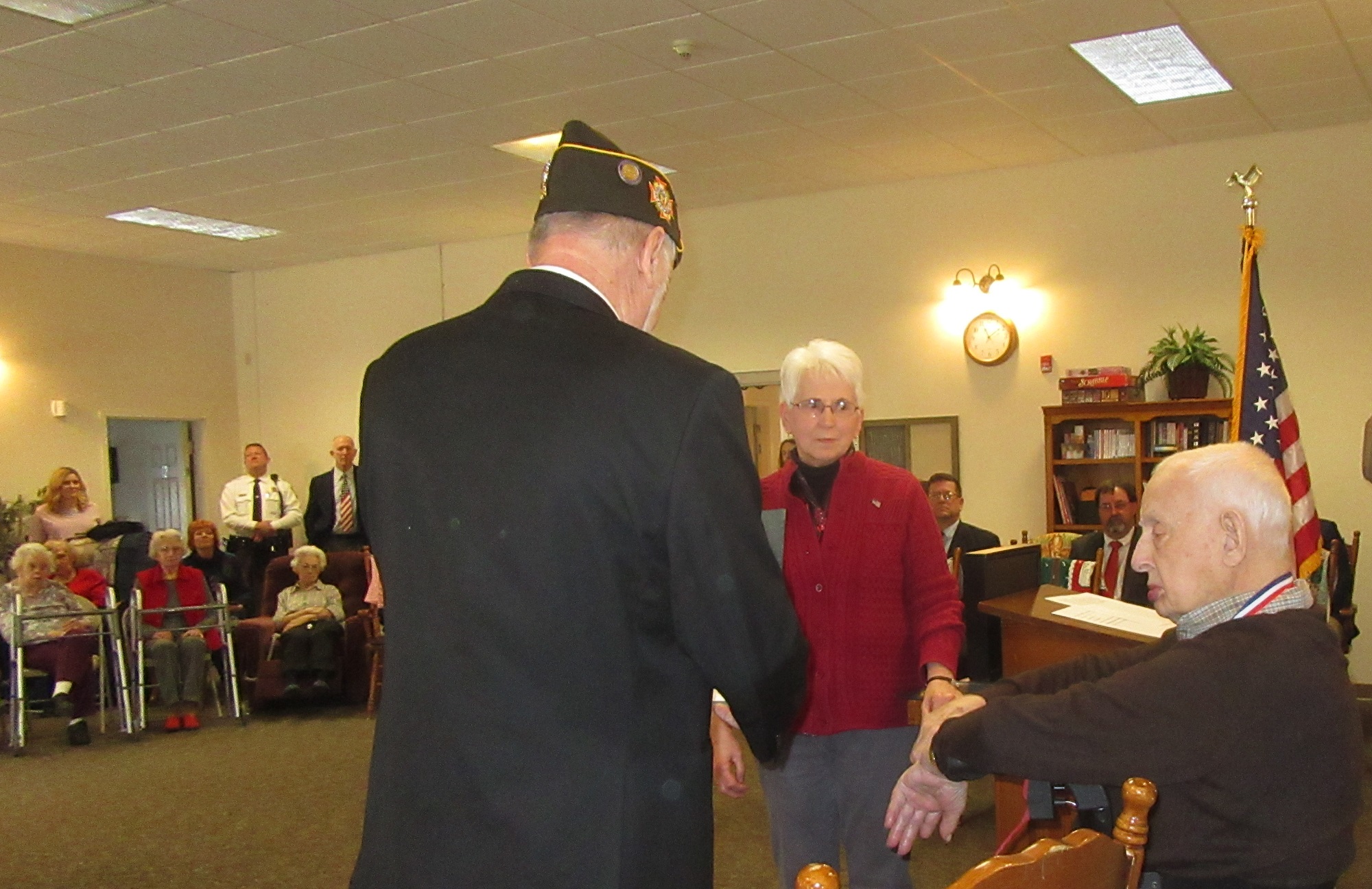 As a room full of supporters looks on, VFW Post 8675 commander Bill Struble and Linda Besley present World War II veteran and prisoner of war Gerald Spencer with a medal and special coin to thank him for his service and valor.

As April 26 approached in 2018, Gerald Spencer told some staff members at Twin Oaks Personal Care Home where he resides in Granville Township, Bradford County, that he wanted a cake. They told him, “You already had a cake for your birthday.” He retorted, “April 26 is when I gained my freedom, and I want a cake.”

Slowly, but surely, the story came out about Spencer’s capture by German forces in December of 1944 and his eventual release from a POW camp by a Russian tank company four months later. Linda Besley of Troy, whose husband Richard had been an active member of Troy VFW Post 8675 up to his death in January 2017, sent an email to current post commander, Bill Struble, and asked if something special could be done for Spencer.

On February 14, Spencer felt the love and admiration of Post members, the Bradford County Commissioners, Quilts of Valor representatives, family members and fellow Twin Oaks residents who showered him with hugs, gifts and accolades at the personal care home. According to Bradford County veterans affairs director Pete Miller (below, against wall), Spencer is believed to be the last living WWII POW in the county.

Miller facilitated the ceremony, telling of Spencer’s tough winter as a prisoner of war, moving by foot from one camp to another as the Germans were being pushed back by allied forces. He was forced into hard labor, cutting down trees that were used as lines of defense against the advancing American and British troops. He survived on turnips and hard bread. He left the Army with numerous medals, including two purple hearts and his POW medal. 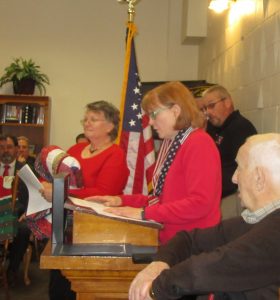 Carol Ullo (above, at podium) spoke on behalf of the Friendship Quilters of Towanda, part of the Bradford County Quilts of Valor Chapter. They have presented 42 handmade quilts to local veterans since 2016. Spencer received the first one for 2019. She was joined by Deborah Struble who helped her wrap Spencer in a quilt and give him a hug. 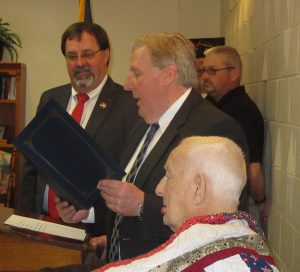 With county commissioners Daryl Miller and Ed Bustin at his side, commissioner Doug McLinko read a proclamation for Spencer that had been approved at a public meeting just prior to the event. The moment was an emotional one for McLinko, whose father, Robert, a Navy veteran, passed away less than a month ago and was Spencer’s roommate at Twin Oaks.

After PA District 68 Rep. Clint Owlett read a citation for Spencer from the House of Representatives, Bill Struble and Linda Besley hung a medal of gratitude from Spencer’s neck and presented him with a VFW coin. Many guests remained after the ceremony to personally thank Spencer for his service and to enjoy refreshments prepared by the Twin Oaks staff. 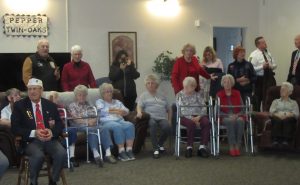