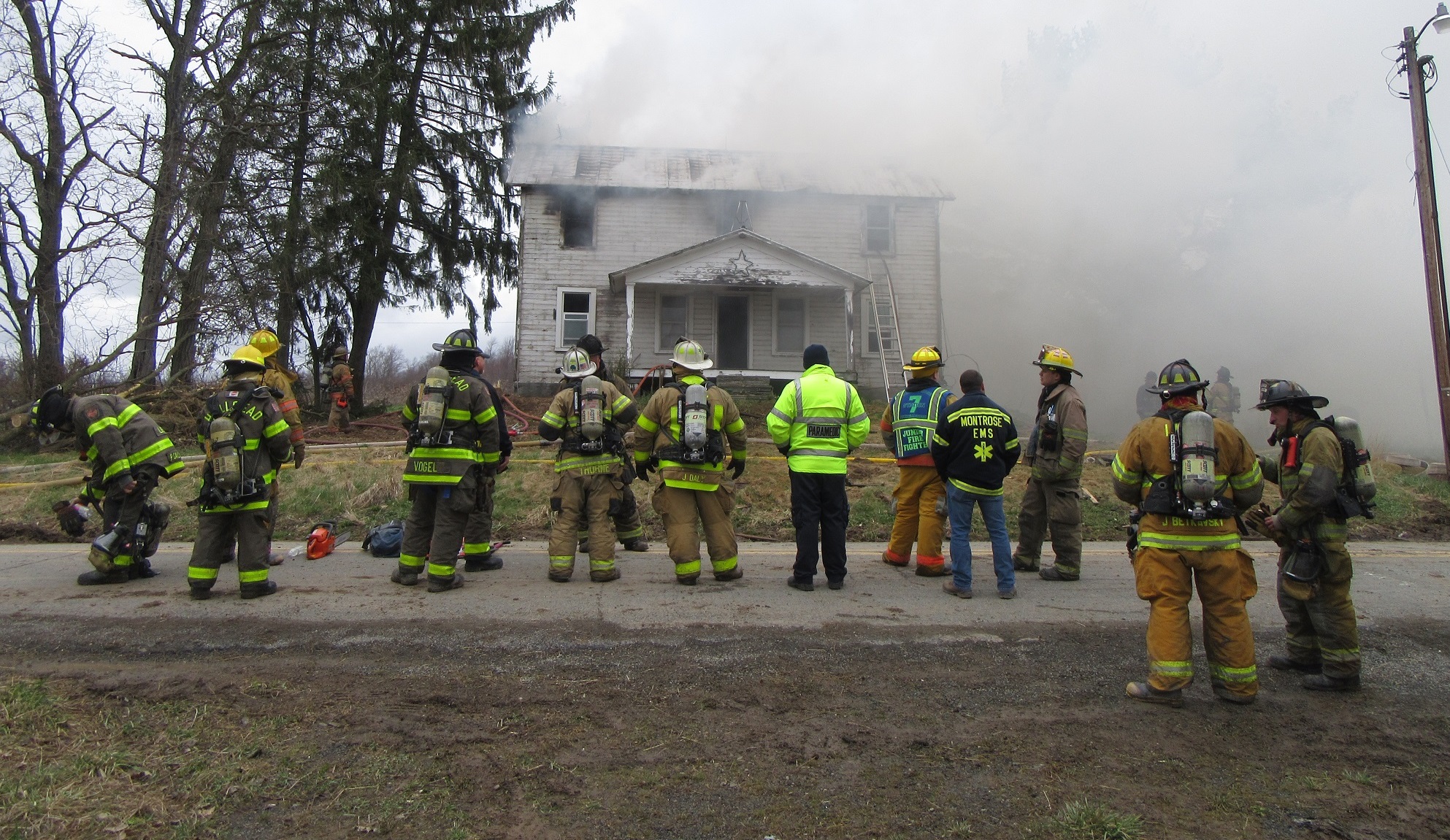 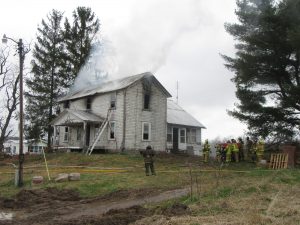 Firefighters and EMTs from numerous communities in Susquehanna, Wyoming and Bradford counties (top) were on hand this weekend for the burning of an old farm house in Auburn township that served as a valuable training tool for Back to Basics Training Weekend, sponsored by Susquehanna County Volunteer Firefighter Association and numerous local businesses. While “search” and “attack” teams of firefighters in the training exercises work inside the structure, a third crew just outside the door serves as a “safety line” in the event that the first two teams encounter any problems. According to coordinators of the event, the training went perfectly, and there were no issues.

Residents alarmed by billowing smoke in the area of SR 3004 near Auburn Four Corners on Sunday need not worry. At least eight fire companies were on the scene, and nobody was hurt. The structure was a total loss, but important lessons were learned by all. The blaze was a part of a 16-hour course conducted by the Susquehanna County Volunteer Firefighter Association that included the burning of an acquired structure.

As flames licked the outer walls and smoke poured from the upper windows of the vacated, donated farm house, firefighters were inside the structure working with nine state-certified instructors. The first to enter the house were part of the “attack” and “search” crews, the latter looking for occupants. Meanwhile, four additional teams were staged outside, assuming various roles as they would for a legitimate house fire call. After completing their tasks in the structure, each crew moves to “rehab” for rehydration and a check on their vital statics, after which they get a break.

The “Back to Basics Training Weekend” was the first event of its kind in 17 years according to organizers and provided a unique opportunity for younger firefighters from a three-county area. The alternative, Jim Conboy of the Rush Volunteer Fire Department explained, is to transport everyone to a training center counties away where controlled flames course through a concrete structure.

“They are great for training and can be used every day,” Conboy said of the training facilities. “But this is a real live fire. They can see how it works and travels through the building.” In fact, the wind shifted several times on Sunday morning, pulling the smoke out one side of the house and then the other.

Firefighters from Rush, Elk Lake, Little Meadows, Hallstead, Springville, Tunkhannock, Laceyville and Wyalusing participated in the training exercises, which included four hours of lectures on Saturday morning at the Rush Fire Company and four hours preparing the building. Additional orientation on Saturday included dry hand line movements to acquaint firefighters in moving hoses to and through a structure.

A rapid intervention team (RIT) was at the ready in the event that any of the trainees got into trouble, and the Montrose Minute Men served as the official EMTs for the event.

In addition to the donation of the house, DTE Energy contributed five thousand dollars, which helped to cover the cost of the instructors. DTE community relations communicator Sandra Major said the company was very happy to support a program benefiting firefighters so much closer to their homes. Traveling two hours is a strain on their families, Major noted. She was impressed by the number of younger firefighters participating, who drove an average of 20 minutes for the classes.

Nonetheless, the men and women were sacrificing the better part of a weekend and braving pelting sleet and snow showers on Sunday as they learned techniques that could someday save lives and property in their respective communities.

“It’s a great experience for everyone to work together,” Susquehanna County EMA director Bob Thatcher remarked, noting that most of the companies involved this weekend rely on each other for backup. He expressed his appreciation for the support of DTE and hopes that a similar training session can be conducted in the fall.

Additional sponsors of the Back to Basics Training Weekend were Montrose Septic Service, Powers Stone, PS Bank, and Ace Robbins. 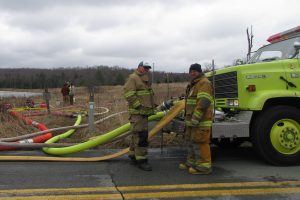 Water for Sunday’s training activity was drawn from a nearby pond along SR 3004. 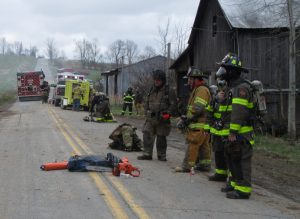 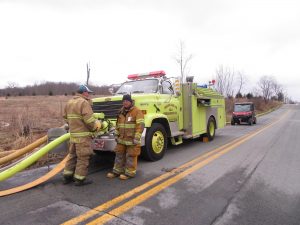