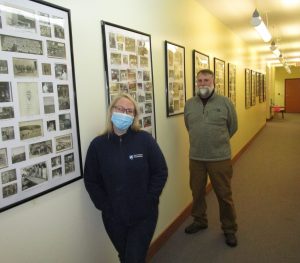 A copy of a photo (top) hanging in the Bradford County Commissioners office of a “Cow Beauty Contest” held on Main Street, Towanda in the first half of the 20th century resurfaced recently on Facebook. Renewed attention to the photo brought to light the huge collection of early farming memorabilia held at the Penn State Extension office and led to this story, which took some curious twists and turns. Above, Penn State Extension administrative assistant Jeanette Vannan (foreground) and Extension client relations manager Mark Madden stand among nearly a dozen frames featuring historic photos depicting the evolution of the original Bradford County Farm Bureau and Penn State Extension.

The Penn State Extension office in Towanda has become home to a treasure trove of Bradford County farming history. And, as an enormous volume of artifacts is slowly processed, discrepancies have arisen as to the agency’s assumed association with another state-sanctioned organization that wasn’t officially founded until a half century later.

The Pennsylvania Board of Agriculture was formed in 1876 to bring together numerous organizations that were trying to reach rural families with a variety of information about not only farming but gardening, food preservation, and home safety. Sixty-six county agricultural leaders attended the first convention. Newspaper clippings of the era suggest that the Bradford County Agricultural Organization was also quite active during this time, and members of the School of Agriculture at Penn State College participated in the state Board meetings until they were discontinued in 1917.

Some of these organizations came and went, but Penn State College prevailed as a viable advocate for providing important resources and information for fledgling farmers and others pursuing the hard life of surviving in Pennsylvania’s countryside. The College founded the Agricultural Extension Office in 1907 after several decades of successfully conducting correspondence courses via the U.S. Postal Service. The Extension was active in Bradford County by 1913 as the Bradford County Farm Bureau.

The learn-by-mail approach continued and was paired with weekly newspaper columns in rural publications, from which farmers could learn the latest developments in soil fertility; pesticide use in orchards; home-mixing of commercial fertilizers; improved seeds for clover, alfalfa, and oats; and ongoing enhancements in corn production.

In 1914, Congress passed the Smith-Lever Act, which paved the way for the expansion of agricultural education across the country. It immediately provided a boost to Penn State Extension agents visiting rural residents in Bradford County, empowering them with the knowledge and tools they would need to be more efficient and profitable growers.

By 1915, large-scale presentations were being held in fields, milk testing conducted in barns, and home economics classes for rural women in schools, churches and Grange halls. “We had a lot of person-to-person teaching back then,” said Jeanette Vannan, Extension administrative assistant for Bradford and Sullivan counties. “It was the only way they heard what worked and what didn’t.”

Subsequently, 4-H got its start under the Extension as a way to instill in youths the virtues of crop production and animal husbandry, as well as homemaking practices like cooking, cleaning and sewing.

“4-H was really big in rural areas because there wasn’t much else for youths to do in the way of extracurricular activities,” Vannan suggested, noting that most residents of Bradford County at this time had some connection to agriculture.

Extension records indicate that the agency assumed office space in the lower backside of the Bradford County Courthouse in about 1916, moving there from Canton as the Bradford County Farm Bureau. But that’s also where the eyebrows of some historians wrinkle and others cast serious doubt on that partnership.

“As far as I know, the Farm Bureau was not formed by Penn State,” said current Bradford Sullivan County Farm Bureau president Barbara Warburton. “The first info I have is that it was started in the 1950s with Sen. Roger Madigan sitting on the first board.”

“It would appear that the Bradford County Farm Association was created in the 1952-53 time frame,” PA Farm Bureau government affairs and communications division manager Joel Rotz concurred. The term “Farm Bureau,” he added, was unavailable to them at the time as it was trademarked.

While there is little room to dispute the state’s stance on the Bureau’s beginnings, it didn’t explain why so many of the artifacts that have surfaced at the current Extension office on Main Street in Towanda have Bradford County Farm Bureau written on them.

The Extension moved from the courthouse to the former First Ward School building on Fourth Street in 1982, before making the move in about 2008 to Main Street, from which it now serves Bradford, Sullivan, Susquehanna, and Tioga counties.

Along the way, thousands of mostly black and white photos, as well as volumes of meeting minutes and member ledgers penned in fountain ink were hastily gathered together. Perhaps there were plans to organize the materials for later use, but it never happened…until now.

Vannan came upon the collection when she started working there in 2013. The accumulation of Bradford County’s varied agricultural history included photos of large groups of people gathering for outdoor presentations and others showing farmers or agents with crops and livestock or posing for ceremonial events. “When I came here, all of these things were pushed into tubs,” Vannan recalled.

One tub contained a fragile draft copy of a history of the Bradford County Farm Bureau. The agency’s move to Towanda in 1916 was qualified as follows: “Since being located in the county seat, an effort has been made to give residents uniform opportunity for the utilization of this service as per the Smith-Lever Act.” Additionally, the historical preface maintains that resources were to be “for the free use of any person in the county interested in agriculture” and gives a nod to Penn State College as at least a partner from the start.

“I am totally perplexed by this and don’t know how to resolve it,” Rotz wrote in an email after viewing a digital copy of the history piece. In a phone conversation prior to seeing it, he speculated that the Bradford County Farm Bureau might have been part of a southern Pennsylvania cooperative that facilitated the sale of farm implements and seed stock to farmers. But, Rotz wrote in the email, “It doesn’t sound like the ‘cooperative’ origins either.”

Warburton and Rotz are both in possession of a book celebrating the 25th anniversary of the PA Farmers Association that suggests that Penn State was not in favor of its creation. Rotz noted that the same was true of local Granges, members of which came out in droves to argue against the Farm Association establishing a branch in Bradford County. A meeting at the courthouse expected to garner about 20 persons instead drew so many that it had to be moved to the large courtroom.

After fielding numerous questions ranging from high membership dues to whether or not the American Farm Association president was Jewish, organizers waited out the raucous crowd until the majority remaining at 11:30 p.m. were in favor of forming an Association branch in Bradford County. By the next year, it had 264 members.

So, if the original Bradford County Farm Bureau was neither an agent of the state nor part of the known cooperative using the Farm Bureau name at the time, what was it? Vannan did some more digging and found the answer in a 1963 newspaper article promoting the Extension’s annual meeting and 50th anniversary. “The organization was first known as the Farm Bureau,” it reads, proving that they were one and the same.

Subtle controversy aside – and unknown to Vannan at the time she started sorting the materials – dozens of the more people-oriented photos were isolated at the suggestion Extension financial manager Renee Mosier and assembled in frames that could accommodate their varying sizes.

Many of those selected for the display could be dated, but the names of photo subjects still elude Vannan. Nonetheless, the series of frames that now dominate the hallway between the Extension offices and those used by Bradford County Veterans Affairs and the Bradford/Wyoming Counties Literacy Council present a vibrant, visual timeline of rural life from 1915 into the 1970s.

“I thinks it’s amazing what she’s done here,” said Mark Madden, an Extension client relations manager who recently celebrated his 28th anniversary with the agency. Older visitors to the office suite, he noted, are encouraged to peruse the gallery and help identify the people therein by writing their names on sticky notes that are affixed to the frames.

The internet has become another vehicle by which Vannan can share many of the photos and other artifacts that she has carefully extracted from those tubs and digitized, as well as information about upcoming in-person and virtual programs offered by the Penn State Extension. Interested readers can find the photos on the Penn State Extension Endless Mountains Facebook page.

Of the hallway photo gallery, Vannan remarked, “It’s a great place for people to see them, but how do we use them?” There is still so much material to sort out and so few people left to help categorize dozens of file folders and identify the photos.

One of the less ambiguous pieces is a large manila envelope containing correspondence between the Extension and Mrs. Kenneth Beachley, who was better known as Betty Jones of Columbia Crossroads when she was very active with Bradford County 4-H in the 1920s. “I don’t want to burden you with historical items…,” Beachley wrote from her home in Wormleysburg in 1978. It appears that young Betty – a Troy High School student – had served as the Club’s secretary or historian, as she amassed quite a collection of newspaper clippings, early photos, 4-H handbooks, and a detailed account of Bradford County’s representation at a national 4-H camping trip to Washington, D.C., in 1929. Beachley’s obituary indicates that she went on to become the Penn State Home Economics Extension representative for Somerset County. She died in 1996.

“After 100 years, it’s still overwhelming,” Vannan said of Beachley’s contribution and the historical accumulation in general, adding, “4-H’rs still drop off their collections.”

She welcomes guests to view the exhibit and share their ideas and knowledge of the framed images. Appointments can be made by calling Vannan at 570-265-2896 or sending an email to jav17@psu.edu. Information about online courses and instructional tools can be found at http://extension.psu.edu/. 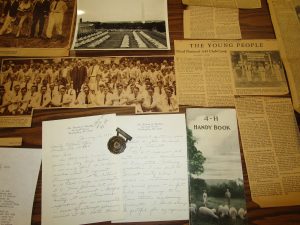 Just a portion of the Bradford County 4-H legacy donated to the Extension in 1978 by Betty Jones Beachley, a Troy High School student and 4-H member of the 1920s. 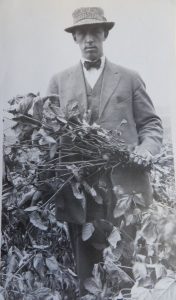 D.K. Sloan was the Extension’s first Bradford County agent. He was from Lycoming County. 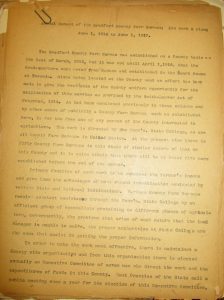 A cover page detailing the beginning of a since forgotten Bradford County Farm Bureau shows the fragility of the documents and photos that have been uncovered in recent years.