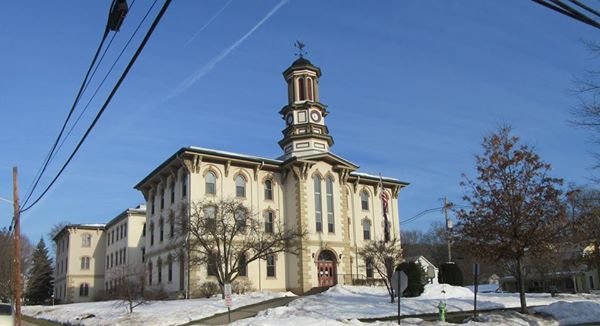 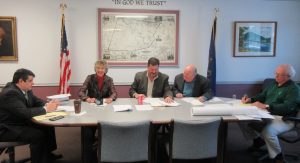 Snow was melting rapidly during the Wyoming County Commissioners meeting on Tuesday, where commissioners applauded county workers and residents for working together to dig out and recover from last week’s blizzard.

Bennett noted that she has been lobbying for a long time to get the MHDS psychologist to come to Wyoming County, as anybody currently needing an assessment has to be driven to Luzerne County at theirs or someone else’s expense.

“You can’t bill for transporting people down there because they are not officially in the system yet,” she explained.

Bennett also announced that RFPs (request for proposal) have been awarded for MHDS, and that Wyoming County has received its rate contract, but the process is currently held up in Harrisburg.

What is really needed, she contended, is a MHDS satellite office in Wyoming County. Often, when she calls the office in Wilkes-Barre to request services, Bennett related, she is put off by comments suggesting that having to drive to Wyoming county is a burden, when the name of the agency implies that those services are equally available to Wyoming County residents.

“It’s supposed to be a joint venture,” she stated.

Commissioners Ron Williams (above, second from right) and Tom Henry (above, center) asked Bennett to exercise patience and offered hope that the recent hiring of Michael Donahue as Human Services coordinator for Wyoming County would bring about the service changes that she was seeking. Henry also invited Bennett to attend an MHDS board meeting with him on March 30 to voice her concerns.

Bennett noted that anybody requiring mental health, ID, or autism services can contact her at 570-996-6222.

Drug and Alcohol Treatment for Youths Coming to Wyoming County

Commissioner Williams was happy to announce that EIHAB Human Services, located at the former St. Michael’s School on Rt. 92 south of Tunkhannock, will soon begin a drug and alcohol treatment program for youths ages 10 to 18 years. Twenty six youths will initially be enrolled in the program, which will start within a few weeks. At full capacity, the program can provide as many as 60 beds for inpatient treatment. This would require additional staffing, which would be paid for by state mandated insurance that covers each child or teen brought into the program, according to Commissioner Henry. Williams related that the emphasis of the program will be on rural counties. 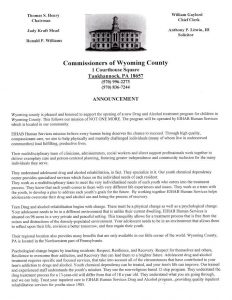 Bennett was assured that EIHAB will also offer a “day program,” which she stressed would be a more practical option for students in the Tunkhannock Area School District who must currently travel to Montrose to participate in the PATH (PA Treatment & Healing) program.

Wyoming County 911 director Jeff Porter (below, left) was commended for finally bringing into check several contracts between Wyoming County and companies that piggyback their services off the county’s communications towers. Porter secured a five-year contract with Chesapeake Energy for continued use of a tower in the Forkston area at a rate of $6,000 per year. He also made significant progress on reigning in outstanding debt racked up by Indigo Wireless Communications out of Wellsboro. The latter company had fallen more than $31,000 behind in payments to the county and is currently paying an extra $1,000 per month in an attempt to catch up. At that rate, however, the company will fall short of settling its debt with the county when the first of its three contracts is up for renewal in 2019. 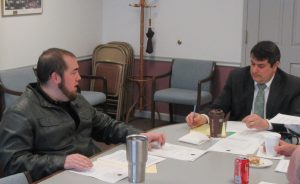 When the vast different between the rates charged to Chesapeake and Indigo was questioned, Porter explained that Chesapeake uses only one tower for inter-company communication within a 50-mile radius. Indigo also uses towers in Osterhout in Tunkhannock Township and on Sugar Hill in Bradford County to provide cell phone service to its customers. The tower on Sugar Hill is used by Wyoming County for emergency communication in the Laceyville area.

Porter noted that Chesapeake requested that its contract be automatically renewed every five years for a total of 20 years at the same rate, which the commissioners turned down. The commissioners also directed solicitor Paul Litwin (above, right) to draft a memorandum of understanding to Indigo that, if their balance is not cleared by March 31, 2019, their contract will be suspended and service disrupted at 90 days.

“They’ll respond quickly to that,” said chief clerk Bill Gaylord. “They need us.” 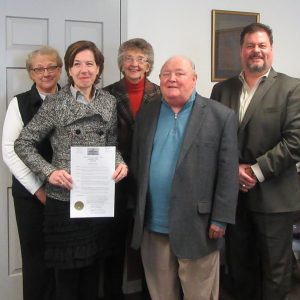 NEPA suffers a rate of colon cancer about 17 percent above the national average, which Saunders (above, second from left) suggested is attributed to a more sedentary lifestyle and poor diets in the region. Each year, approximately 540 new cases are diagnosed in the area, and about 200 die from colon cancer. The numbers are dropping, Saunders reported, but are still too high.

County employees raised a little more than $1,000 through the purchase of T-shirts that they will wear on March 30. The commissioners cited administrative assistant Linda Stacknick (above, left) for her diligence as team leader at the courthouse.

The commissioners were pleased to report the hiring of Stephen Klinges of Wyoming County as a new full-time cook at the Wyoming County Prison and Kyle Pollock of Clarks Summit as a new part-time corrections officer.

“This couldn’t have come at a better time,” Henry remarked. “”We’ve been having a horrible time getting help at the jail.”

Their tone was bittersweet, however, in accepting the resignation of Donna Manglaviti as a Children and Youth Services case aide. Williams commended Manglaviti for her years of service to the county, which began with a stint as a deputy clerk at the courthouse. She is leaving the county for a job with the state, he noted.

Bill Gaylord noted that April is designated as Safe Digging Month and that anyone planning a project that requires digging should call 811 three days prior to starting the job.

Gaylord and Litwin also related that the county has extended the existence of the Wyoming County Industrial Development Authority (IDA) for another 50 years. The IDA was established in the 1970s to oversee, among other projects, development associated with Procter & Gamble. Recently, the commissioners announced the need to update the agency’s board when faced with the possibility of natural gas service being extended to Tunkhannock residents.

Litwin explained that a project that has since been scrapped necessitated an extension of the life of the IDA beyond its scheduled expiration in 2021. Even though the unspecified project will not be pursued, the process to extend the existence of the agency was already underway.

The county commissioners will attend the statewide CCAP conference in Harrisburg this coming Sunday through Tuesday. Their next public meeting will be held at 9 am on Tuesday, April 4 after a meeting of the Wyoming County Prison Board.

(To read about an additional matters discussed during the commissioners meeting, click here: http://www.endlessmtnlifestyles.com/?p=6978)