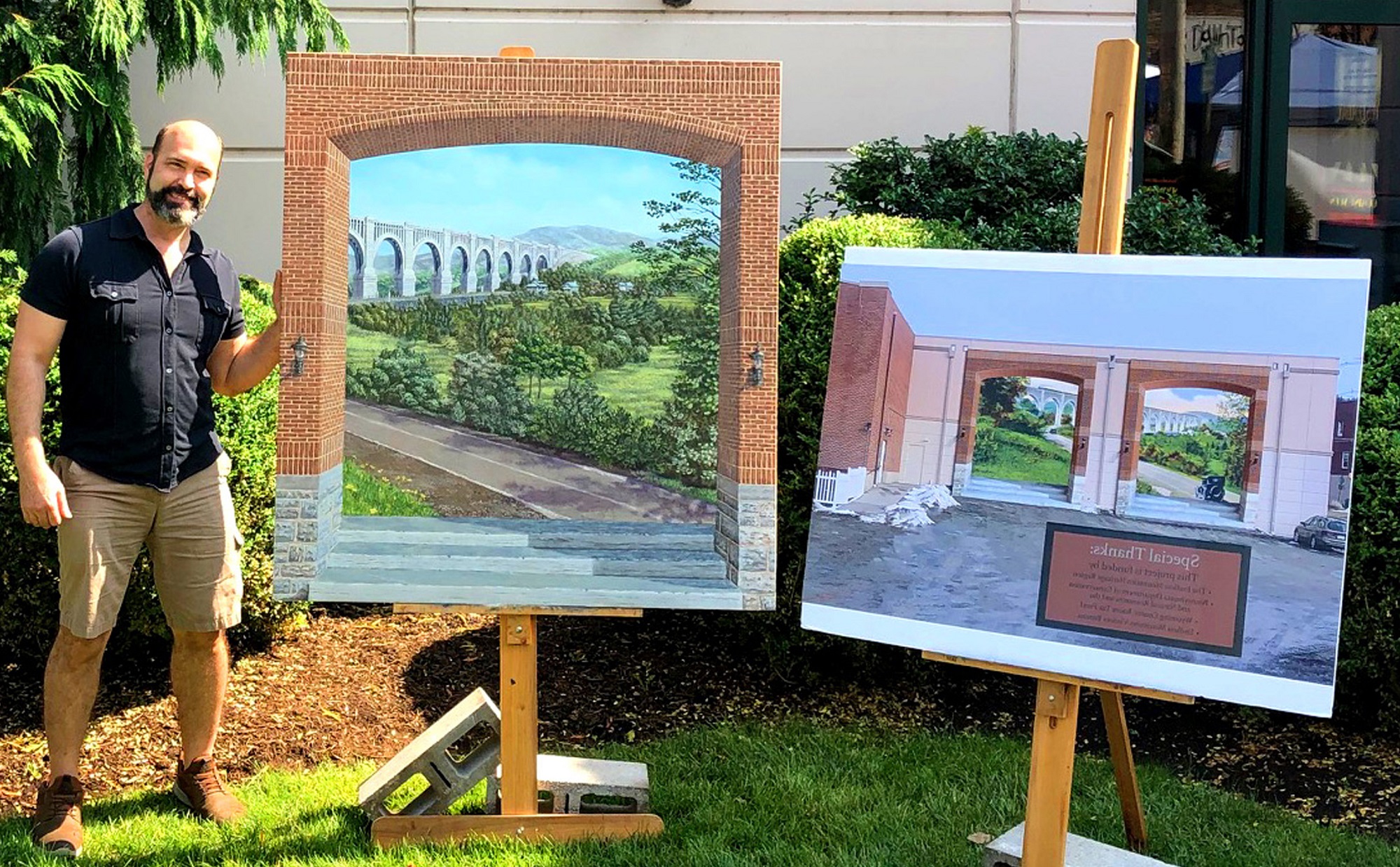 Two sides of the Dietrich Theater in Tunkhannock have been blank canvases since the theater expanded in 2009. Thanks to the Endless Mountains Heritage Region, the Pennsylvania Department of Conservation and Natural Resources, Wyoming County Room Tax Fund and the Endless Mountains Visitors Bureau, the Bridge Street side and the back of the theater will be adorned with three Wyoming County history murals – one per year – beginning in the late fall. The murals have been titled “Telling Wyoming County’s History.”

Artist Bob Lizza of Lizza Studios revealed his rendering of the first two murals on Founder’s Day. The first two murals depict the Tunkhannock Viaduct in Nicholson, a rendering inspired by a postcard from the 1930s. The style of painting used by Bob Lizza, making it appear as though you can walk right into the painted scene, is called “trompe l’oeil” or trick-of-the-eye.

Bob Lizza has studied the mural process for the last six years, and during that time the process has evolved. Murals can be painted directly on the surface of a building, but they can also be scanned and printed on a cloth-like material, sometimes compared to parachute cloth, and adhered to the building. On North Main Street in Pittson, PA, one can see an example of a mural using this process. This process has served well for urban murals in Philadelphia and other cities.

“After several months of working on the early stages of the mural project, I was so excited to display the first two original oil paintings on Founders Day at the Dietrich,” said Lizza. Many people stopped by as Bob “unveiled” the murals and answered questions about his work.

“The blank exterior walls of the expanded Dietrich Theater are ripe to tell a story,” said Rogler. “We are delighted to have these walls voice our heritage by telling Wyoming County’s story. It’s very fitting that the first historical mural to be completed is one of Wyoming County’s most prominent landmarks.”

Project coordinators and sponsors are grateful to those who have helped to bring the Telling Wyoming County’s History mural project to the epicenter of Wyoming County: Bob Lizza and all who served on the committee. Their dream is poised to become a reality with funding from the aforementioned organizations.