In: Collaborations, Laceyville
With: 0 Comments 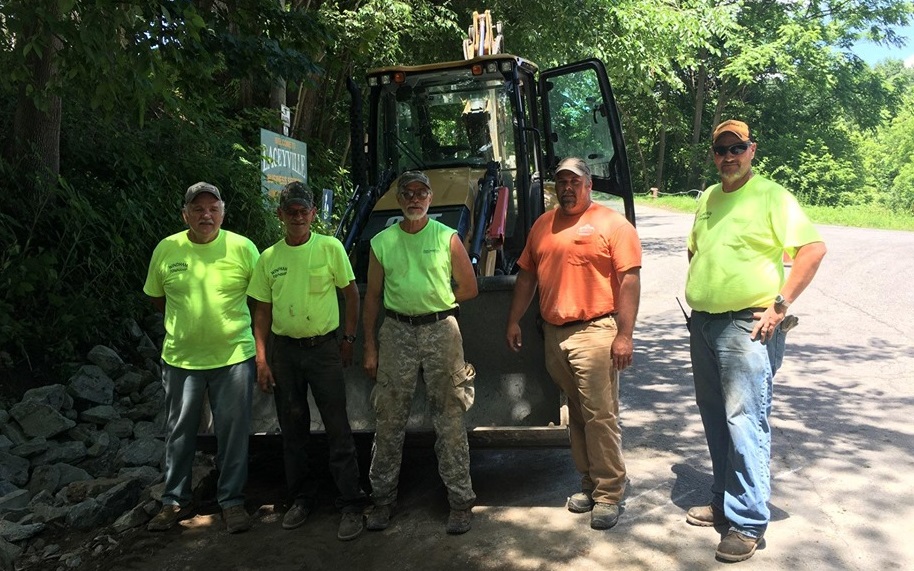 Pitching this past week to help their cross-river neighbors with flooding issues were (from left) Robert Long, Ron Trowbridge, Robin Robinson, Jason VanDeMark and Brent Trowbridge.

A week after a torrential downpour on June 18 caused flooding and runoff issues in several parts of Laceyville, borough council president Randy Brigham was contacted by Windham Township supervisor Jason VanDeMark and told that help was on the way.

Brigham’s response to VanDeMark, to whom he had reached out knowing that the neighboring municipality had some heavy equipment was, “Great. How much will it cost?”

“I’d asked him for a quote,” Brigham explained. “He (VanDeMark) said, ‘Our quote is that we’re coming over to help you.’”

On June 24 and 25, Windham Township provided two dump trucks, a backhoe and manpower to specifically address runoff issues at the west end of Main Street. A gully running about 600 feet along the roadway was filled with about 140 tons of 4- and 5-R stone, and two concrete sluices were put in place that addressed another aspect of the ongoing problem.

“FEMA said that we had to clear debris from the ditch first,” Brigham related. “But Mother Nature did that for us. It had already washed down the street.”

Though some grading remains to be completed, he noted, the estimated $14,000 cost for both projects had they been bid out was reduced to $5,500 for the cost of materials.

“I was really blown away,” Brigham said of efforts from the Windham Township workers.