In: Public Exhibit
With: 0 Comments 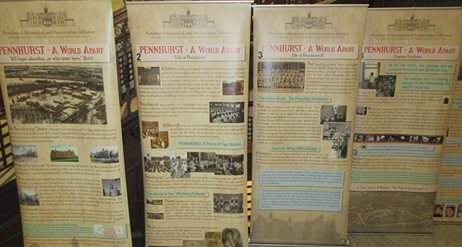 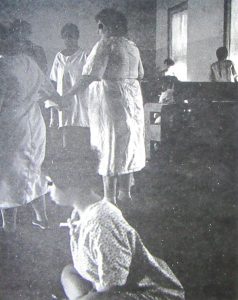 A temporary exhibit inside the Bradford County Courthouse rotunda includes enough photos of people relegated to squalid conditions because they were deemed to be insane to make all but the most hardened of souls a bit queasy. But the introduction on the first of 13 panels not only struck a nerve in me but compelled me to read every paragraph completely. It made me realize that, had I been born to a poor Pennsylvania family in the 1800s, I could very well have been vanquished to a life of misery after suffering a head injury as an adult.

“Pennhurst – A World Apart” chronicles the construction and eventual closure of Pennhurst Hospital near Philadelphia. In general, it depicts a century-old society where the intellectually challenged were stripped of their humanity and literally housed like animals for the “common good.” Of more than 10,000 people, many of them children, who were sent there, most died within the confines of its cold, bleak walls.

It was a disastrous experiment that took decades to expose, despite numerous attempts that began as early as World War II when anti-war pacifists assigned there left with shocking photos taken with hidden cameras. Through these and more photos, published excerpts and video snippets, “A World Apart” demonstrates the mistakes associated with early treatment of those with metal health issues and how we gradually became a more compassionate nation that continues to struggle with how best to ensure quality of life for people with mental disabilities.

Pennhurst was built in 1908 as the Eastern Pennsylvania Institution for the Feeble-Minded and Epileptic at a time when those who were intellectually challenged or had mental defects that defied the medical sciences were considered a threat to society. Sterilization – a process deemed abominable when the Nazis employed it during World War II – was common, in order to prevent “unchecked procreation.” Ironically, the same people who were denied intimacy were often the victims of sexual abuse by staff members. 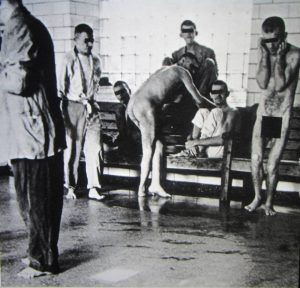 In February of 2002, I slipped off the icy ramp of a rented moving truck and landed flat out on the pavement, with my upper left thigh and the left side of my forehead taking the brunt of the fall. It was first time since I was a toddler that I blacked out, opening my eyes to the sight of the toes of somebody’s shoes as I tried to lift my face out of a thin layer of ice on the street. As the friends who were there to assist with our move into a new house helped me to my feet, I insisted that I was OK, but it was apparent that I was not.

In hindsight, someone should have taken me to the hospital. But, with time ticking on the moving van, and a handful of friends available to us for just so long, I was directed instead to lay on a mattress on the floor of an upstairs room while the crew quickly moved our belongings into the house that we would call home for the next five years. I was ever so grateful but felt so terribly guilty for not having helped. 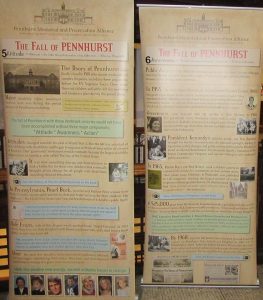 The next day, while leaning under the hood of my truck to identify an engine problem, I had my first seizure. I gripped the sides of the truck and held on tightly as my mind went through a series of bizarre fluctuations that would become the hallmark of what I could only classify as “spells,” having never experienced anything quite like them. Though somewhat benign in appearance to the casual observer, my body felt like it was turning inside out and that I was being electrocuted from the inside.

As they became worse and more frequent, my seizures were misdiagnosed as panic attacks and I was subjected to horrible antidepressants, the worst of which was Paxil. In a sense, I was being told that it was “all in my head.” I couldn’t disagree. I knew that’s where it was.

By the time they were properly diagnosed after the injured part of my brain was mapped out via MRIs, I had become severely depressed and was experiencing suicidal tendencies. I felt that I had become a burden to my loved ones and wanted to die every time a new episode of seizures would begin. After Lamictal did not keep the seizures at bay, I was gradually weened off that common epilepsy medication and introduced to Keppra, which, Thank God, worked.

I now only suffer a mild seizure once every two months or so – rather than as many as a dozen a day, and I can live with that. I got my life back thanks to modern medicine and growing awareness of cognitive disorders and how head injuries change the way the brain functions. The experience has enriched me in that I have a more intuitive perception of what children and adults suffering from a variety of seizure disorders as well as autism and other spectral disorders are up against.

When I told my partner, Mike, about the display at the courthouse in Towanda, I said, “That could have been me.” Those who weren’t permanently impaired were forced to labor in the hospital’s gardens or laundry room. The least intellectually challenged – who enjoyed no more human rights than their severely affected counterparts – were often charged with looking after them. That might have been the best existence for which I could have hoped. 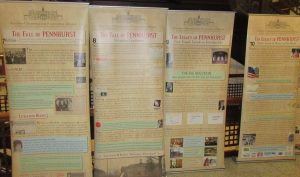 Mike felt that my synopsis was a bit over-reaching. “You weren’t actually crazy,” he remarked. But I persisted.

I reminded him that, when the seizures began, I told him that I felt that aliens were trying to abduct me. That’s crazy – especially considering that I was not a fan nor even a casual believer in that brand of science fiction. As the seizures gradually worsened over the next five years – even after we moved to a smaller house to “reduce stress” to no avail – I was losing a sense of who I really was. I felt like an alien and, as I previously mentioned, began to contemplate suicide. By that point, my seizure disorder had evolved into a mental illness.

Given the cultural climate and misguided intellect of 1908, my family could have been convinced that committing me to an insane asylum was in my best interest, especially if they could not afford 24/7 personal care to keep me from harming myself. Families who tried to keep their mentally-afflicted members at home suffered a peculiar scrutiny, as if they were the cause of the illness. 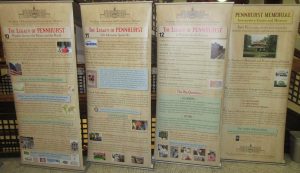 Despite all of the evidence of cruelty and misery at Pennhurst, the facility did not officially close until 1987. Thinking of how many innocent souls were lost and forgotten there leaves me grateful that I was born into a better era of science and understanding of seizures. But my heart aches for those who never knew the touch of a loving hand, never heard a soothing voice, and ever felt the support of family and friends who wouldn’t give up on them until proper treatment could be found.

March is Intellectual Disabilities Awareness Month. We all know of somebody who is dealing or has dealt with a cognitive disorder, whether he or she was born that way or suffered an injury, a disease or a life-changing event that made putting this crazy world into perspective even more challenging for them than it is for the rest of us.

If you have the time, I strongly recommend that you visit the Bradford County Courthouse to see “Pennhurst – A World Apart” before it moves on. If you can’t, at least do some reading about it online. I promise that you will never think of the intellectually challenged the same way again. Thank you to the Bradford County Department of Human Services and Pennhurst Preservation & Memorial Alliance for partnering to bring this poignant display to the Endless Mountains.