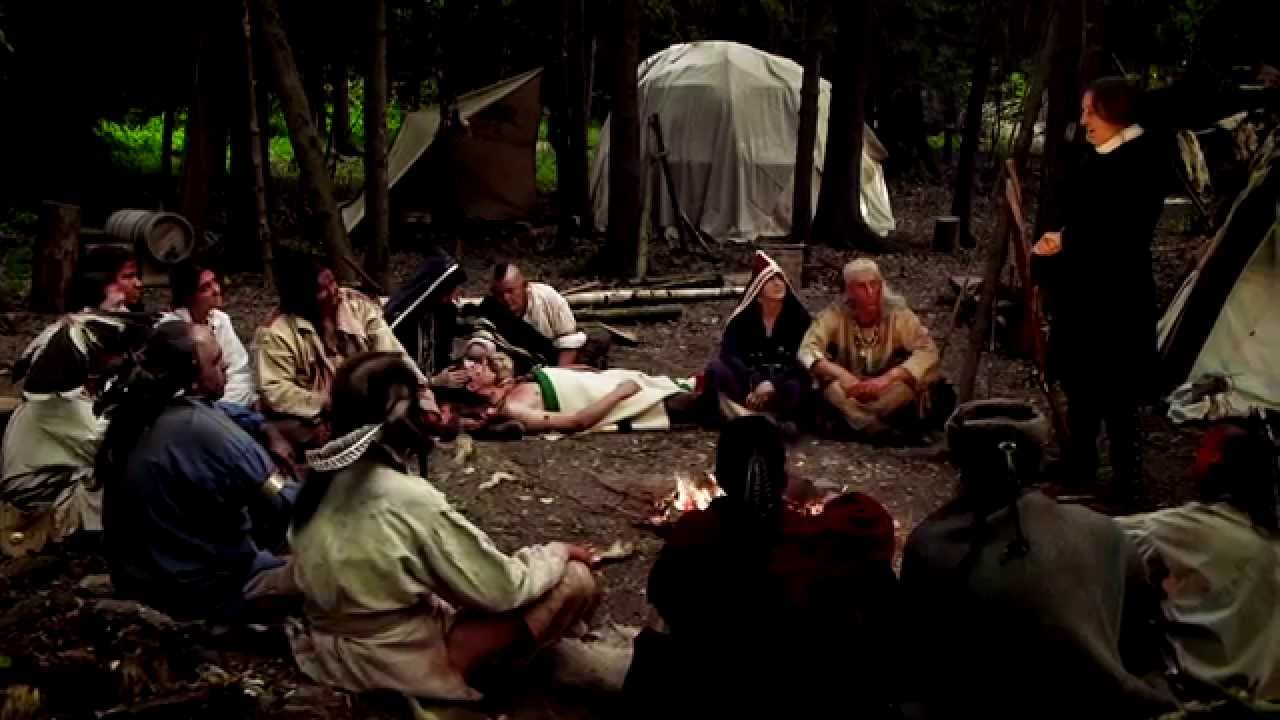 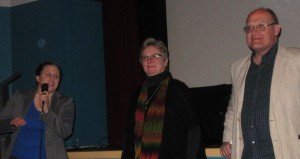 Above photo and commentary by Rick Hiduk

Wyoming County Cultural Center executive director Erica Rogler (above, left) introduces Moravian scholar and Bucknell professor Katherine Faull (center) and Moravian Seminary professor Craig Atwood at a free presentation and film about Moravian missionary David Zeisberger at the Dietrich Theater on March 13. Zeisberger is celebrated by the Center for Moravian Studies as the Apostle to the Indians, as depicted in a scene from the documentary about him (top).

Attendance for a free presentation about missionary David Zeisberger at the Dietrich Theater on Sunday impressed both theater management and the guest speakers. More than 80 people, including families with children, enjoyed a screening of “David Zeisberger: Apostle of the Indians,” after which Moravian scholars Katherine Faull and Craig Atwood entertained questions and comments from an energized audience.

The documentary was filmed and produced in 2014 by VistaFilm for airing on Czech public television. Faull, a professor at Bucknell University, and Atwood, a professor at the Moravian Seminary in Bethlehem, asked for permission to screen the film in select American venues when they learned that a version of the Czech language program had been produced in English. They were taken off guard when audience members quickly asked after viewing the film if they could buy copies.

In a country where religion was banned during the long era of Soviet occupation, Zeisberger has become a cult hero for spreading the Moravian religion and living among Native Americans for more than 60 years. Zeisberger was much better known in this burgeoning nation than in his native land, and the presentation in Tunkhannock on March 13 about his incredible life journey was enlightening to local residents – especially the revered missionary’s connections to the Endless Mountains.

After his family helped to found Bethlehem and Nazareth in eastern Pennsylvania, Zeisberger’s fascination with local natives and his desire to spread the Gospel among them drove him to begin a series of settlements occupied primarily by Indians converted to Christianity. Because of their non-violent nature and their close ties to Indians, the Moravians were mistrusted and harassed by both the ruling British and the frustrated Colonists.

Like most Native Americans, Zeisberger’s bands of Christian Indians were almost constantly on the move, trekking another hundred or more miles into the wilderness each time, only to have civilization and numerous conflicts catch up with them again. With most people in attendance well aware of Zeisberger’s settlement of Friedenshutten near present-day Wyalusing, many questions centered on that village.

Faull first acknowledged that the documentary’s producers were inaccurate in their mapping of settlement movement across Pennsylvania, Ohio and Ontario. (The icon meant to represent Friedenshutten, for example, was placed near present-day Williamsport instead of Wyalusing.) As he fostered newer settlements to the west, Faull explained, Zeisberger often visited and accessed his other established sites. Therefore it was likely that he was in and out of the Wyalusing area numerous times.

At one point, even non-Christian natives in the area came to regard Friedenshutten (tents of peace) as a safe haven and asked to hold inter-tribal councils there.

When Zeisberger sensed that any village was in danger, he would instruct his people to pull up stakes and move again. This was most likely the case at Friedenshutten, as the village was abandoned when Gen. Sullivan’s troops marched up the North Branch Susquehanna River valley in 1779. There were no Indians left when his contingent first reached Tunkhannock either, Faull explained, though native peoples had occupied Tunkhannock’s fertile flood plain for thousands of years.

More than once, however, Zeisberger backtracked to find villages burned to the ground and their inhabitants murdered. He persevered however and was still establishing new settlements at the age of 76. His 87 years of life shocked many in attendance who knew that average life expectancy in the American Colonies was at the time closer to 35 or 40. In fact, Faull noted, many Moravians lived well into their 70s and 80s at the time.

“How did people putting up with such hardships live so long?” an audience member asked.

The reasons, she and Atwood surmise, are many. First, the structure of Moravian society provides support of health and emotional and spiritual wellness from many angles.

“They had a better standard of medical care than average Europeans,” Faull related. Adding that she had asked herself the same questions many times and learned much from translating the memoirs of Moravian women. Much of their understanding of each other’s needs is a result of their “choir” system of self-segregation that puts like-minded people in groups: single adults, married adults, widowed adults, etc.

Thus, emigration of Moravians was well-planned and focused on both safe passage on ships bound for the New World and preparation on the American shore for assimilating Moravians into their respective colonies as quickly and efficiently as possible. Atwood noted that the average death rate during an Atlantic crossing among other Europeans in the 1700s was higher than 10 percent. By contrast, the Moravians lost but one per thousand.

Lastly, Faull explained, Zeisberger and his fellow missionaries approached Indians and nature with eyes wide open. “They learned how to live in this land by observing the Native Americans,” she remarked. “They learned what plants were edible and what plants – like ginseng and red raspberry roots – were medicinal.” They also learned that flat, fertile plains served as the best village sites. Most importantly, Zeisberger and his colleagues learned the native languages and used them to communicate.

Zeisberger himself became a master at translating German into Iroquois (Houdenosaunee) and Delaware (Lenni Lenape), among other native dialects. His books on the subject have stood the test of time and are used today by native peoples to relearn their languages.

The success of the Moravians in converting Indians to Christianity relative to that of other faiths came primarily from their openness to differences among new cultures and the belief that a relationship with the Christian God was to be sought and not enforced. The Moravians permitted native people to retain many of their customs, though they did encourage them to dress more modestly.

It was an experiment in reverse assimilation by which the Indians never felt threatened. Zeisberger met with chiefs at Onondaga in the heart of the Iroquois Nation and so impressed the council with his understanding of their language and sensitivity to their ways of life that he was granted the rare status of free passage throughout the existing Indian territories. He was recorded among Indian historians as being a great orator and passively persuasive with his liturgy and translated hymns.

Faull related that she would look into the possibility of VistaFilm making copies of the DVD of “David Zeisberger: Apostle of the Indians” available for purchase in America and suggested that audience members check back with the theater in a month or so to see if they are available.

“Local history is always a big attraction, so we shouldn’t have been surprised by the great crowd,” Wyoming County Cultural Center executive director Erica Rogler said after the event. “I was especially impressed by the Q&A following the screening – great questions – and it lasted for 30 minutes with no restlessness.”

For more information about educational programming at the Dietrich Theater, log on to www.dietrichtheater.com. To see a trailer of the documentary, look for https://www.youtube.com/watch?v=QUJpMcYv5_Y on YouTube.