In: Corporate Generosity
With: 0 Comments 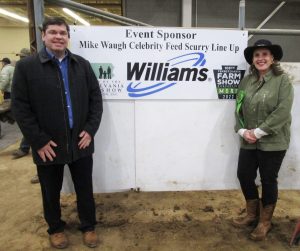 Sponsors, drivers, and volunteers (top) line up for a group photo, with Williams Companies director of community and project outreach Mike Atchie at far left, just prior to the Celebrity Feed Scurry held at the PA Farm Show on Jan. 11. Above, Mike Atchie (left) congratulates State Rep. Sheryl Delozier on her fifth-place finish in the contest. Williams sponsored the horse hitch event, which is conducted annually by the Friends of the Pennsylvania Farm Show Foundation.

One highly anticipated contest at the Pennsylvania Farm Show is the annual Celebrity Feed Scurry. A number of elected officials, state agricultural leaders, and even Farm Show royalty take turns in one of 12 heats of guiding a pair of giant draft horses through an obstacle course. With the help of an experienced handler and a “farm hand” loading and unloading hay bales, the team strives for both speed and accuracy.

The event was sponsored again this year by Williams Companies and attended by Williams director of community and project outreach Mike Atchie. What the event lacked in attendance due to Covid concerns, it more than made up for on the floor of the Equine Arena where volunteers moved quickly between rounds to keep the action going. State Ag Secretary Russell Redding provided opening remarks for the contest, which is coordinated by the Friends of the Pennsylvania Farm Show Foundation.

“Williams is pleased to once again support the Friends of the Farm Show Foundation by being the lead sponsor for the Celebrity Feed Scurry event,” Atchie stated. This is the sixth year that Williams has lent such significant support to the contest.

In addition to the event itself, Williams sponsored drivers in three of the 12 heats. Celebrities on the Williams’ sleds included Rep. David Delloso of PA District 162, Rep. Danilo Burgos of PA District, and Rep. Sheryl Delozier of PA District 88. 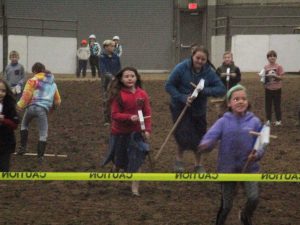 Youths from tots to teens stole the hearts of participants and audience members as they vied for prizes in a stick pony race, the final heat being a race between the winners of each age group and several Pennsylvania State Police troopers. A tribute to veterans was conducted while scores were being tallied.

Delozier had the best finish of the three, taking fifth place in the race. She recalled that Williams had sponsored her sled in 2020, but she didn’t do nearly as well as this year. The top finisher for the evening was Sen. Cris Dush of PA District 25.

“The fun, friendly competition is always fun to watch, and I also enjoyed the Salute to Veterans held during the event,” said Atchie, who was thanked numerous times by organizers and participants for Williams’ support of the event. 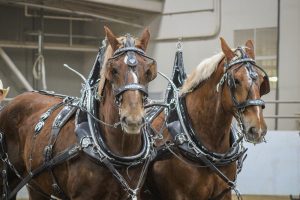