In: Parks and Recreation
With: 2 Comments

A view of Little Rocky Glen(above) just below the bridge that carries Lithia Valley Road over Tunkhannock Creek. Ironically, the Winola Oil, Gas Development and Improvement Company bottled this version of Lithia Water (below) for daily intake and table use. 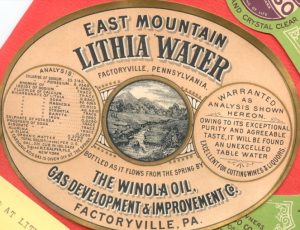 Little Rocky Glen is a 26-acre preserve managed by the Countryside Conservancy in eastern Wyoming County along Lithia Valley Road. The historically popular fishing and picnicking gorge through which the South Branch Tunkhannock Creek runs was acquired in 2004, and a picnic shelter was erected in 2008. Its roaring and plunging waters make it a magical destination any time of the year.

A number of relatively short hiking trails will take visitors from the parking area, along the ledges and cliffs overlooking the falls and potholes to the picnic area where the waters suddenly spread out and become tranquil. Guests to Little Rocky Glen marvel at the ferns and hemlocks that flank the stream, as well as the sheer power of nature as it has carved out this photogenic site over thousands of centuries. 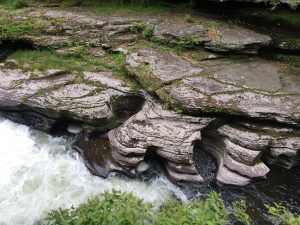 Geologically speaking, the gorge is considered to be one of the best examples of glacial erosion of moderately resistant sandstone. According to research filed by Keystone College, the uniqueness of Little Rocky Glen can be attributed to a glacier in the Late Wisconsinan age that advanced and retreated over present-day Clinton Township many times. At its peak, it is estimated that present-day Tunkhannock lay under 3,000 feet of ice.

The resulting water table at the bottom of East Mountain near Factoryville created the springs that feed the South Branch Tunkhannock Creek. The clear waters were deemed medicinal after they were “discovered” by a company drilling wells in search of mineral compounds. Among the natural elements were potassium, sodium, and lithium. The name Lithia Valley is attributed to the (supposed) lithium found in the water.

The Lithia Water Spring played a role in enhancing the image of Factoryville as a summer resort situated along the former Delaware, Lackawanna and Western Railway, which brought visitors from Scranton and Binghamton, NY.

The water was bottled under at least two brand names in the early 20th century, including East Mountain Lithia Water by the Winola Oil, Gas, Development and Improvement Company and as Liposo Sparkling Table Water (below) by the Liposo Company of New York, which marketed it to the Philadelphia area. It was suggested that it could remedy everything from constipation and heartburn to nervousness and affections of the liver and kidneys. 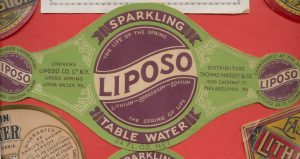 According to a label on an old East Mountain bottle, the company drilled to a depth of 473 feet before “natural gases forced the water to the surface, making a gushing spring.” The water was said to be “naturally charged with Carbonic Acid gas, which adds to its exhilarating effects and renders it pleasant to the taste.”

While the validity of the claims could be questioned and have been all but forgotten over time, there’s no doubt that a walk along the gorge will still stir the senses and bring one down to earth. In that sense, Little Rocky Glen and its Lithia Valley Water remain therapeutic more than a century later. 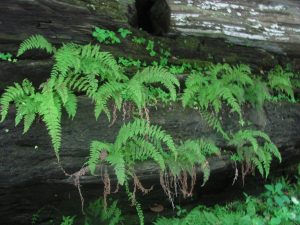 “It’s just a special place,” Countryside Conservancy executive director Bill Kern remarked. “Not only is it different from our other preserves, it’s different from most other natural areas in northeast PA.” Kern likes to enter the gorge from the downstream picnic area. “It almost feels prehistoric the way the moss and ferns grow and drip water off the sides of the gorge.” A fun fact that Kern divulged is that the deepest hole, under Mushroom Rock, measures 19 feet, as determined by a scuba diver during a stream cleanup.

Kern noted that the property was for many years part of an active farm owned by the Dixon family, who would allow friends and other area residents access to the gorge. By the 1970s and ’80s, crowds would sometimes form, and the family grew less comfortable with what was happening there. “If you mention the Glen to people in the Abingtons,” Kern remarked, “everybody has a party story.”

To date, Kern prefers to visit the preserve in spring and fall when it is less crowded. When the leaves begin to change in the autumn, he added, “the mix of colors above and reflecting on the pools of water is somewhat mystical.”

Recreation writer Jeff Mitchell wrote in his hiking blog that “although small in size, Little Rocky Glen is big on beauty.” He recommends hiking the south side of the creek to get closer to the water but cautions that dangerous rapids form during times of high water and should be avoided by all but the most experienced hikers and paddlers. 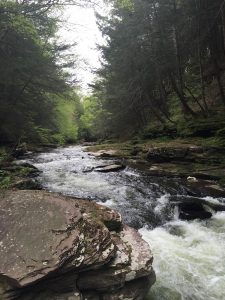 Kayakers enjoy running the glen when the water is high, Mitchell notes. “I’ve paddled the glen many times. I’ve flipped, swam, and even lost my boat once,” he wrote. “My friends found it about a half mile downstream, perched on a rock as if it belonged there.”

What was known in recent decades mostly only by locals and to extreme recreationists via word of mouth burst into the limelight last summer in the midst of the COVID crises and a warmer than usual summer. “It wasn’t uncommon to have up to 70 cars parked up and down the shoulders of the road on hot days,” Kern related. The crowds were too much for local authorities to manage, and new users often disregarded rules and left behind significant amounts of trash. Several people had to be rescued by first responders who had a tough time accessing the site. 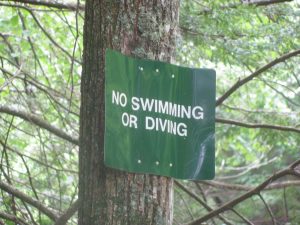 The Conservancy has since collaborated with the PA State Police, Clinton Township, the PA Fish & Boat Commission, and the Factoryville Fire Company to erect additional signage to reduce overcrowding and prevent swimming, which can turn tragic with the slightest miscalculation. Parking will be limited to six or seven vehicles in the designated parking area.

“We highly encourage users of the Glen to arrive early, carpool, or ride bikes to enjoy this amazing community resource,” Kern stated. “We are a ‘carry-in, carry-out’ preserve, and we intend to keep it that way.”

Countryside Conservancy owns and manages 510 acres in Wyoming and Lackawanna counties. Most of the sites, like Little Rocky Glen, are open year-round from sunrise to sunset. Lithia Valley Road turns south off Route 6 between Tunkhannock and Factoryville. All landscaping and cleanup efforts are paid for by the Conservancy, and donations are greatly appreciated to support their efforts. For more information, interested readers may visit www.countrysideconservancy.org or call 570-945-6995. 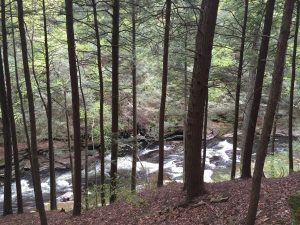 Little Rocky Glen as seen from the upper trail. 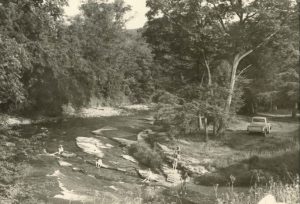 The downstream portion of Little Rocky Glen courting guests in the middle of the 20th century. 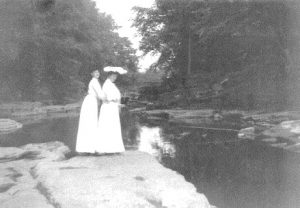