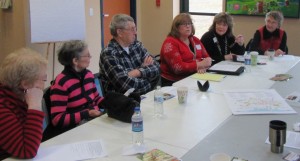 At a Feb. 25 meeting of project partners and supporters of the Historic Tunkhannock Walking Tour, a list of 40 homes, businesses and churches to be featured in a tour booklet and map were approved. Committee members (above) also agreed on dates and times for special presentations and discussed ways to engage downtown businesses with the guided tours, which will begin on Founders Day, June 25 and continue on Thursday evenings in July as weather permits.

As the information for the 24-page full-color tour booklet is finalized for printing, project partners are now looking toward the development of a script for tour guides that will include facts, tidbits, and lore about many aspects of living and working in Tunkhannock during the past 240 years. Several local citizens have already availed information from their private collections to project coordinator Rick Hiduk and graphic designer Diane Turrell, but more are needed to help “connect the dots” on the tour route.

“It’s truly a community project,” noted Wyoming County Cultural Center director Erica Rogler. “So many people are volunteering to guide tours and provide pictures and information about the homes and buildings on the tour.”

Wyoming County Historical Society president Mark Mitchell and Cultural Center cultural programs director Margie Young will curate a photo exhibit that highlights the tour. Current photos of buildings on the tour, along with older photos and artifacts associated with the structures will be displayed in the lobby of the Dietrich Theater in June and July. Area residents who would like to contribute to the exhibit are asked to call 570-996-1500.

On Tunkhannock’s Founders Day, June 25, there will be a historic presentation at the Dietrich Theater at 11 a.m., during which various aspects of Tunkhannock and Wyoming County history will be discussed by a panel of local historians. After a brief question and answer session, those registered for the presentation will be given the opportunity to take the first official tours of the borough’s Historic District.

Guided tours will continue on Thursday evenings in July for preregistered individuals and groups. A date will be announced in the coming months as to when phone registration begins. At any time after June 25, local residents and visitors are welcome to pick up a copy of the tour booklet at the Dietrich Theater, the Endless Mountains Visitors Bureau (EMVB), and the Wyoming County Chamber of Commerce and conduct self-guided tours, following the instructions and centerfold map therein.

The guided Walking Tour is estimated to take about one-and-a-half to two hours. Committee members suggested that tour guides be prepared to give abbreviated tours if a particular group is limited on time or weather is threatening. It was noted that a shorter version of the tour would also be more handicapped-accessible, as the sidewalks in the business district are more consistent than those in the neighborhoods.

Tunkhannock Business & Professional Association president Nancy Parlo and EMVB director Jean Ruhf will work together to develop an insert for the tour booklet that will feature coupons for discounts at eateries and shops in Tunkhannock. Committee members hope that Walking Tour participants will take time before or after their tours to enjoy a meal and movie and do some shopping while in town.

“I’m extremely happy with the community response that this project is generating,” said Ruhf. It is so good to see new faces at the meeting and so much interest in the Walking Tour.”

Three new faces at the Feb. 25 meeting represented the first local residents to step up as volunteer tour guides. Rich Jones is a professional tour guide who will donate his time to the project. His wife is a teacher at Tunkhannock High School. Kathi Harter Keefe and her husband grew up in Tunkhannock and returned to retire. She is involved with the Dietrich Theater and the United Way of Wyoming County.

Beth Romanski works at Farmers Insurance. Her family’s ties to Wyoming County reach back to the 1700s. “I have come to appreciate the unique, small town beauty of Tunkhannock and the desire to preserve and embrace Tunkhannock’s past,” she stated. Each of the three contributed additionally to the meeting by sharing marketing concepts and walked the tour route with Hiduk after the meeting. Additional tour guides will be needed. Those interested should call 570-996-1501.