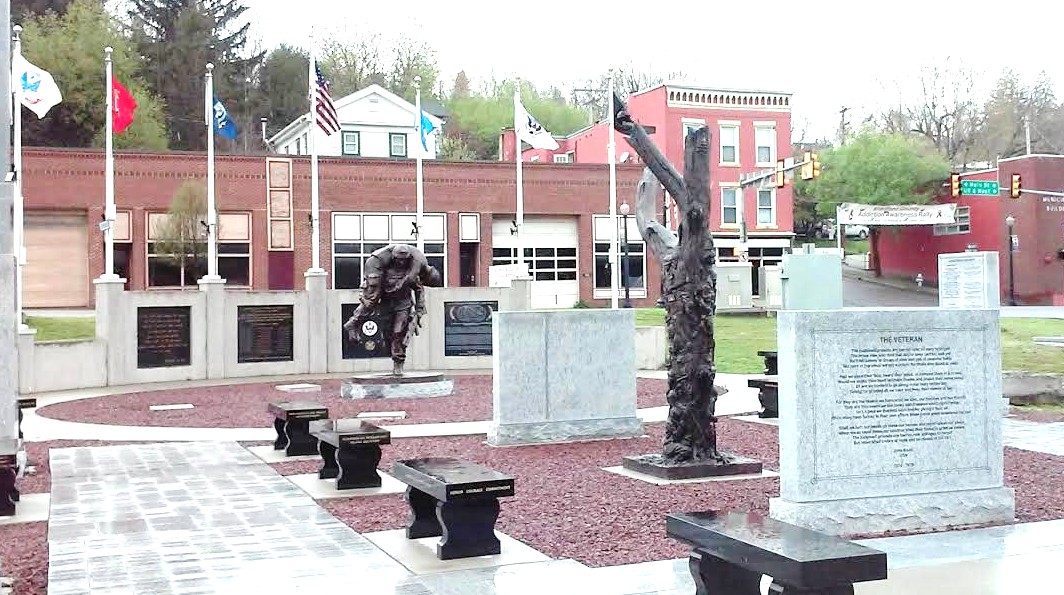 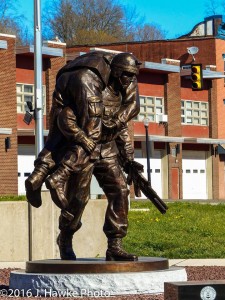 New statuary is completing the look of the Bradford County Veterans Memorial Park (BCVMP) envisioned by its founders. The group has competed its fundraising mission and will conduct a final project event that will coincide with Independence Day Weekend.

Many people have helped to champion the cause of the Bradford County Veterans Memorial Park since it’s inception nearly eight years ago, but nobody more so that Joe Doherty. On Saturday, July 2, Doherty will participate in what he says will be BCVMPA’s final project event.

Military veteran and WGGL morning show host Mike Powers will emcee the event, which will begin at 1 pm (1300 hours). The ceremony will include a color guard, performance of the National Anthem by Kamri Hoffman, invocation by Pastor Josh Payne, and a speech by Lt. Colonel George Crowell.

At about 1:30 pm, there will be a helicopter flyover from US Army Air National Guard. Dr. Tim Hoffman and Doherty will offer brief commentary. There will also be a reading of “The Veteran Poem,” the inscription under the Quintessential Soldier statue.

There will likely be future events in the beautiful new park that pensively fills a former “dead space” at the Towanda intersection, but they will not be under the auspices of the BCVMPA.

Doherty related years ago that, when he went looking for memorials to Bradford County’s veterans, he was appalled at what little he found and was dismayed that the earnest efforts of veteran’s groups in the past had not been maintained. He approached Towanda Borough officials and the Bradford County Commissioners with plans for a new memorial park and was met with both cooperation and some funding.

The accolades and financial support did not ignite the enthusiasm for which Doherty had hoped among most leaders of Bradford County’s other 50 municipalities nor the general public. Even potential commercial sponsors were reticent to contribute to the project until they saw “boots on the ground.”

Doherty and volunteers from Middendorf Construction and other businesses broke ground at the site and completed Phase I of the (then) three-part project. Perhaps because most of Phase I was structural or even infrastructure, corporate leaders and the general populace was apparently not seeing enough “bricks and mortar” to fully stand behind the project yet. Ironically, individual supporters were prepurchasing engraved bricks and sidewalk pavers that would not be installed for another year or so.

What Doherty had envisioned as a three-to-four year endeavor became bogged down, but BCVMPA members continuously looked for new avenues for funding. They persuaded a few municipalities to send some ACT 13 money (natural gas Impact Fee funds) their way and won over one more business leader at a time.

Some well staged events on annual holidays saluting veterans brought attention to the park as it continued to evolve. Nobody crossing the adjacent Veterans Memorial Bridge from Wysox to Towanda could deny that something very special was happening with that space. Finally, the tide turned for the BCVMPA and they crossed the hurdle that would bring the park to near completion.

“All statuary is funded,” Doherty noted in an email to supporters. “We await delivery and install.” New flags will be raised prior to the July 2 event. There remains one bench to be marketed.

As with most designs, there are elements that either do not work or didn’t make the final cut due to budget constraints. There was more statuary and landscape proposed initially that might be realized in later years as Bradford County residents see existing landscaping mature and the park become a truly beautiful addition to Towanda and one of the busiest intersections in Bradford County.

“The design, cost analysis and fabrication of the rotunda (ed note – actually a stylish iron frame) seems to be stuck somewhere in some dark file which nobody wishes to look at,” Doherty laments. “Regardless of whether we have a rotunda or not, the statues will be installed prior to July 2, and we will have a ceremony. It will also be my retirement date.”

Part of the statuary that Doherty is confident will be erected in time is a group of five angels holding scrolls with the names of those killed in action, prisoners of war, recipients of the Purple Heart, Missing in Action or have been granted a Congressional Medal of Honor. So far, Doherty has documented none of the latter.

Nonetheless, after eight years of what Doherty saw as his retirement project, he must understandably step away from it. Doherty is one of many revered senior civic-minded leaders of our era who is concerned about the apparent lack of enthusiasm in the generations behind him, and anyone who has been involved with him and the Memorial Park project knows that he has done his part.

“I will use every tool in the box to get this job totally done by 4 July,” Doherty stated in an email. “Personally, I want to see it that way.”

Readers wanting to know more about the Bradford County Veterans Memorial Park project and how to support it should log on to www.bcvmpa.org.