In: Congressman Keller
With: 0 Comments 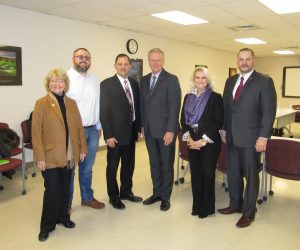 Congressman Fred Keller (PA 12th District) and other elected officials got a first-hand look on Jan. 31 at the nearly completed CDL training facility at Susquehanna County Career & Technology Center (SCCTC) at the Elk Lake School District. Keller expressed his enthusiasm for the program after also taking part in a round-table discussion about the funding of trades education.

“It’s terrific having this asset right here in Susquehanna County, given that there are so many jobs available in the truck driving industry,” Keller remarked, noting that the school shows forward vision by constructing classrooms larger than initially needed, a paved testing platform with room for growth, and plans for a driving simulator to further compliment the curriculum. “I think they’ve done a great job of laying a good foundation for this program.”

The tour was led by SCCTC executive director Dr. Alice Davis, Elk Lake superintendent Dr. Ken Cuomo and Cabot Oil & Gas Corporation external affairs manager Bill desRosiers, each highlighting a particular area or aspect of the CDL school. Standing at the front of a small school bus as it circled the newly-paved 300-by-100 foot driving range, desRosiers pointed out an extended graded area that could serve as an expansion of the lot and course if needed. 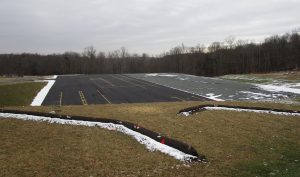 Davis and several SCCTC instructors showed visitors the interior of a double modular building that was finished by students from the school’s carpentry program. Classes of 12 CDL students each will be conducted day and night, the full-time day course running five weeks and night-schooling for 10 weeks.

That flexibility is just one aspect of the program that is designed to provide opportunities for more people in the region to gain family-sustaining jobs and fill a need for the business community.

“We can train them for the jobs that industry actually needs,” Davis explained, noting also that a heavy equipment operator certification course is planned to compliment the CDL program as part of long-term goals. The combination of CDL and heavy equipment licenses, she related, can net a graduate a three-figure salary.

“There’s more than enough work for truck drivers. You can work as much as you want within safety guidelines,” desRosiers said of the invaluable certification. “You can take it anywhere in the country.”

With other trade students providing most of the talents needed to complete the classroom and the nursing students now preparing to help with physicals and drug testing, the cost per student for the course can be held at $6,000. Dr. Davis indicated that there are also resources for veterans and other students that may be able to further reduce that cost, and desRosiers added that many employers will cover the fee.

Keller Listens and Learns at Round-Table

After enjoying a lunch prepared by SCCTC’s culinary arts students, desRosiers initiated a discussion among a field of educators, industry representatives and the organizations that operate between them, facilitating grants from corporations to classrooms.

What is needed most, Dr. Davis suggested, is a better way to get the money to follow the students while still holding the school district responsible. And most in attendance agreed that steering more money to CTC students is unnecessarily cumbersome. 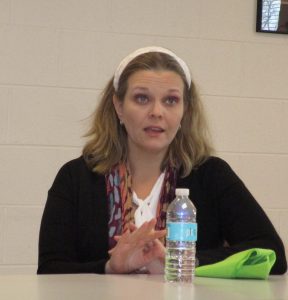 Commonwealth Charitable Management (CCM) director Cristine Clayton (above) spoke to the importance of partnerships between local industry and the school and cited Cabot among “generous supporters of the program.” CCM is responsible for allocating EITC (educational improvement tax credits) funds and other state money aimed at education.

Dr. Cuomo noted that, a decade ago, business and industry stepped up to the plate at the same time funding ended for dual enrollment. “Rural students had limited access to post-secondary education,” said Cuomo. “We had to create some unique opportunities and to subsidize what we lost at the state level.”

Lackawanna College School of Natural Gas & Petroleum program director Sue Gumble told of the success of CTCs in moving students who were formerly considered “marginal” to higher education and solid pay, often the first in their families to achieve such goals. Lackawanna College vice president for college advancement Brian Costanzo noted that 12 students who received EITC funding and took Gumble’s Introduction to Natural Gas course at SCCTC moved directly into classes at LC School of NG with credits under their belts.

“We try to stop false starts,” NTIEC education coordinator Deb Tierney said of providing youths with hands-on opportunities that promote choices. “We save families a lot of money.” Providing greater opportunities for industry to directly support trades education is crucial to NTIEC’s mission, she continued. “Because we are so small, these partnerships are especially important at getting opportunities to the students.”

Rep. Tina Pickett, who serves the western half of Susquehanna County, told Keller that funding sources for rural schools are threatened by shrinking student enrollment, but the schools must move forward. “Just because we are not growing in students doesn’t mean that we don’t have overhead,” she stated.

Keller agreed that “there’s a really strong argument to be made” that changes in how EITC funding can be moved and applied are needed and suggested that further expansion of “school choice” might be a step in that direction. “We need to figure out how this is going to effect the communities and help students achieve,” he stated.

On the topic of the stigma that can pervade trades education, Elk Lake School Board president Chuck Place said that he was unsure if the district has completely overcome the traditional consensus that blue collars careers are somehow inferior, “but I think we’ve come a long way.”

“We have changed the culture here,” Cuomo maintained. “What you believe a kid can do, they will live up to. If you place limits on kids, they will believe it.”

Keller, who confessed to attending trade school himself rather than college summed up Susquehanna County’s diverse economy and its potential to maintain an agricultural presence while also providing different jobs. He told the other panel members to look for students with good work ethic in places like Scout groups and the FFA. “They aren’t all farmers,” he said. “I’m seeing this across the 12th District and the state.”

As for stigma, Keller remarked, “College is great, but it’s not for everyone. I think the stigma lies with the legislators.” 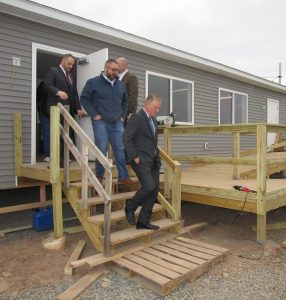