Tunkhannock Creek Vies for 2021 ‘River of the Year’

In: River of the Year
With: 0 Comments 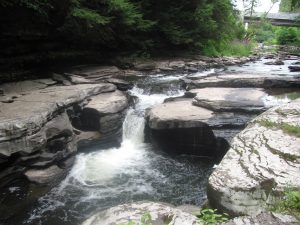 Tunkhannock Creek as it meets the Susquehanna River at Tunkhannock (top), where its south branch flows through Little Rocky Glen (above) and at Lazy Brook Park (below), where NEPA Bluegrass fans enjoy a relaxing float. The popular waterway has been nominated as the 2021 “River of the Year.” 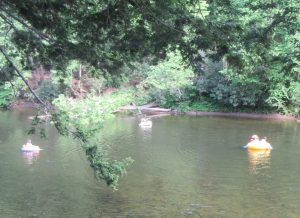 Tunkhannock Creek has been nominated before by the Endless Mountain Heritage Region (EMHR), but this is the first time that it has made it to the finals. In 2016, the EMHR and the Susquehanna Greenways Partnership shared honors when the North Branch Susquehanna River won the online contest. In 2018, the Loyalsock Creek in Sullivan and Lycoming counties was named “River of the Year.”

The most iconic connection of the waterway to modern history is at Nicholson, Wyoming County, where the massive Tunkhannock Creek Viaduct (above) carries the Erie Lackawanna Railway over the valley. Its South Branch is a revered part of the Keystone College trail system and Little Rocky Glen, where its quick decent carved out a series of scenic falls and tubs that attract hikers. The East Branch is the focus of kayakers when waters run higher in the spring.

Finally, the waters meet in East Lemon and meander around Lazy Brook Park in Tunkhannock Township, past Shadowbrook Resort and on to the borough of Tunkhannock, where the creek meets the Susquehanna. It is at this confluence that the history of Tunkhannock changed in 1772 when Zebulon Marcy moved up from the Wyoming Valley and began planting crops in the fertile soil along their banks. 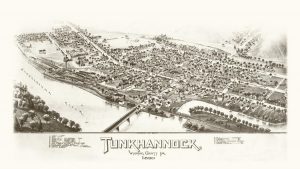 If the Tunkhannock Creek gets the most votes, EMHR will receive a $10,000 leadership grant to help fund “River of the Year” activities, which can include paddling trips, conservation efforts, and celebrations in communities along the stream as it flows through Susquehanna and Wyoming counties.

“The EMHR thanks the Countryside Conservancy and the Conservation Districts of Wyoming and Susquehanna counties for their support in the nominations these last couple of years,” said EMHR executive director Cain Chamberlin. “We plan to work with them on the conservation efforts or events we have if the designation is received.”

Competition is stiff again this year, with the Lehigh River, Shenango River, Buffalo Creek and Loyalhanna Creek also nominated for the title. As of Dec. 15, Tunkhannock Creek was in the lead with 34 percent of votes cast. Online voting opened on Dec. 14 and continues through Jan. 22. It can be done easily by logging on to http://pariveroftheyear.org/2021-river-of-the-year/vote-for-a-2021-river-of-the-year/. 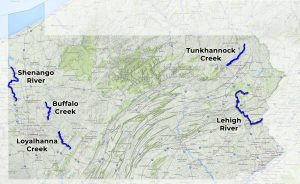