Toughest Job to Date…Role Model to My Daughters 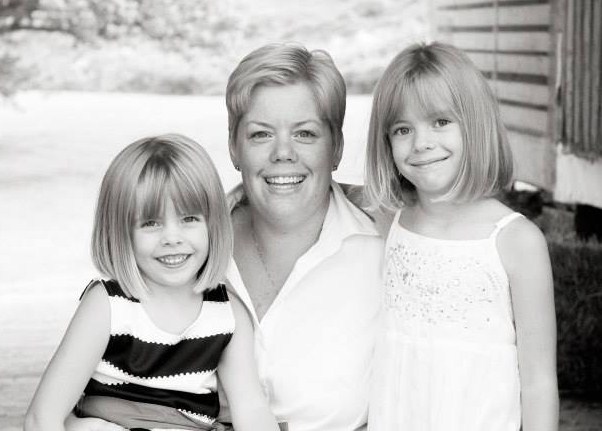 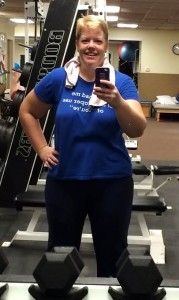 This week, the author opens up about her progress at providing a healthy self-image to her daughters. The gym photo taken last week is the first such selfie she is sharing with the world. To see what she looked like prior to 2013, see telling before & after photos at end of column.

As parents, we hold the biggest job of our lives; to set an example for our children and establish ourselves as role models. Every few years there seems to be some new and crazy celebrity that has grabbed the attention of our kids, and I cringe thinking what they are picking up by idolizing these individuals. There are a few out there I wouldn’t mind my daughters looking up to, but unfortunately the media tends to focus more on the train wrecks.

My biggest role model struggle as a mom of two girls deals with body image. I want my daughters to feel comfortable in their bodies and like themselves. Again, the media manages to play a vital role in this by the people they decide to put on a pedestal before young girls. I admit that I have struggled for years with liking my body, and I do not want my girls to have the same issues. It is very difficult growing up in a society where skinny bodies seem to be the ones praised, and any little “flaw” is pointed out.

When I grew up, it seemed that all women were on the cabbage soup or grapefruit diet; attending Weight Watchers or Jenny Craig; giving Richard Simmons’s Deal-A-Meal a whirl; or downing Slim Fast shakes. I started trying out diets at 12 or 13 and haven’t stopped, it is a vicious cycle. I look at photos of myself during that time and I find myself wanting that 140- to 150-pound body back. I think of how I would compare myself to my sister; who may have weighed 135 on a bad day. I never factored in how she was taller than me and that our bodies were so different; I just saw the number on the scale. That damn number. It was always about the number, and that dictated to me my self-worth.

I attempted to not think too much of that number and focus on my other qualities; like how I could make people laugh. Yep, I was the funny fat girl. I did my best not to show how unhappy I was with my body. Even when I was in the best shape of my life, all I could focus on was what needed to be changed. I was never happy and always found fault with it.

Over the past ten years I allowed stress to move in, and I allowed everything else in my life to take priority, resulting in me becoming the weighing the most I ever have. I put myself at the back of the line; every time. I lost focus of who I was. I knew this was not good nor what I wanted my daughters to see. I was anxious about my health and about whether I could keep up with them. My worst fear was to hear one of their friends comment how fat I was and the embarrassment the girls would feel.

I tried to not let my daughters see how unhappy I was with my body, but they are getting older, and I know they will likely encounter this at some point in the coming years. They will begin to compare themselves with their peers. They will need to wear the right clothes that will happen to only fit the right bodies. They won’t want to listen to me tell them how perfect they are just the way they are. I needed to build a positive image for them to refer to, which meant dealing with my struggle head on – easier said than done

In April 2013, I joined ProCare Physical Fitness to begin my personal battle of the bulge. I admit that I wasn’t 100 percent committed, but I was making the move in the right direction. I signed up for the basic gym package and to see a trainer once a week. At the time, I was only seeing the trainer, because I made excuses as to why I couldn’t make it in any other time of the week. There was my work schedule and my husband was gone with his job and of course I was taking care of our girls by myself the majority of the time and any other excuse I could throw in there. So, I was still putting everything and everyone before me.

I was disappointed not to be losing huge amounts of poundage each week. I thought that someone as heavy I was would lose it fast. Unfortunately, it was slow, because I wasn’t putting all the effort into losing it. I started spending more time at the gym. I had once had the work ethic and the competitive drive, and I needed to un-bury them.

I was making small changes in the foods I chose to eat and I was incorporating those into what the family was eating. I never really thought I ate all that poorly. I wasn’t a binge eater, but I did snack more than I should, and I wasn’t choosing quality food. I included the girls in these changes even though I had always tried to make them healthy foods and help them make healthy choices. Why I didn’t do the same is beyond me.

Back to the present; 17 months since I started on this journey, and I am giving myself seven more months to reach my goal. It took about a year for everything to fall in place; working out, eating right and being in the right state of mind. I have logged hours and I have been put through some crazy and grueling training sessions. In that time I have lost almost 75 pounds.

Even though I have been pushing myself to reach the next level and – even with the compliments from other gym goers and family and friends – I was unable to see the change. Even when my oldest daughter commented the other day, “Momma…your butt is so much smaller now,” I couldn’t see it. I knew I was getting stronger and my clothes were fitting differently, but I still could only see the fat chick in the mirror. It has just been in the past month that I have really been able to see what I am accomplishing – what others have been seeing far longer than me.

I have made sure to share every step of this journey with the girls because it is important that they are included in this. I tell them of what I am doing at the gym and what my trainer has me doing. They stare in awe and want me to demonstrate that day’s crazy exercise; whether it is a T-pushup or inchworms or lifting 40+ pound sandbags and squatting with them. They get so excited for me, and it keeps me motivated.

They aren’t seeing me pop weight loss pills and trying every fad diet. They are seeing me eat nutritious food, but they also see me eat a T-town Bakery cookie once in a while. I make sure that my day is full of healthy choices and treats are in moderation. I have explained how everyone’s body is created differently and it will react to exercise and nutrition differently.

I hope when May rolls around, I will struggle less with body image issues and I will be the fittest I have ever been. I hope that my weight and body hang ups become manageable, because I don’t foresee them going away entirely. I hope I am building a healthy foundation for the girls and they won’t allow body image to absorb as much of their time as it has mine. And, I am also hoping that Katherine will comment that my butt has “REALLY gotten smaller.” 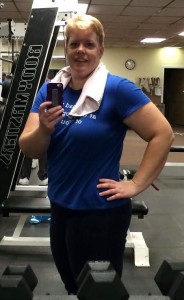 Editor’s note: k.m. and I just recently discussed sharing her Mom wisdom with EndlessMtnLifesyles.com readers, and her first piece that ran last week was along the lines of what I was expecting – given her frequent Facebook posts about raising two young girls. I was was both surprised by the complexity of this piece and very impressed by k.m.’s convictions. “This article was tough to write, and I know I left out so much because this is an extremely difficult topic and it is also hard for me to admit I struggle with it,” she noted at the end of the column. I believe that many women will be grateful that k.m. took the time to share her struggles and her progress.