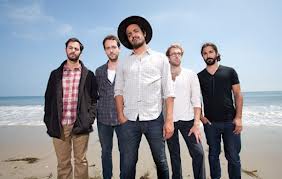 Young The Giant (above) is at #1. The rest of the chart can be found below.

I’ve been a big fan of Alternative music since the week I started college in 1980 and made the school’s radio station my second home. Previous to being a DJ on WPSU Lehman, I had heard the terms Punk and New Wave used in association with various quirky songs and groups. The radio station provided most of the resources that would help me put Alternative Music (then still often called Progressive) into a working perspective.

I took the on-air name Dave Richards and became generally known as New Wave Dave. I scanned the College Media Journal (CMJ) charts every month and spent money that could have been spent elsewhere on albums and singles to complement what little we received from record companies for free. I created regular characters who would “join” me on the Dave Richards Show on Wednesday nights. I was a legend in my own mind, and the show had a good three-year run while I served the radio station as Music Director.

During that stretch of time, I developed my first Richard’s Reports music charts, as per my air name. In this way, I was able to organize progressive pop, dance, and rock music on a weekly Top 100. I distributed printed copies to friends and family members who shared similar tastes (or not).

I read with interest a posting on Facebook by Mike Cahill, a guitarist in the local band Vegas Arcade. The band plays primarily alternative music and prefers the heavier, edgier songs, from what Mike has related to me. I have yet to get out and see them. (note to self…)

In his post, Mike expressed dissatisfaction with a commercial radio station in the Wilkes-Barre/Scranton market currently calling itself The Fuzz 92.1 fm.

Mike’s take on commercial Alternative radio made me want to dig deeply into my studio closet and pull out the box of notes pertaining to the progressive pop/alternative radio station that I pitched to the then owners of 92.1 fm in the late 1980s.

I could hardly tolerate what was known at the time as the Contemporary Hits format, which grew out of the ashes of Top 40 radio. I wanted so badly to see Wilkes-Barre become known for Alternative music in clubs, on stage, and on the air. So I championed the format wherever I went.

To my delight, more than a few bar and club managers gave my mix a try, but I’d be back to playing mostly dance music and mainstream rock in no time. I felt strongly that what was missing was a radio station to literally get the format off the ground, and that its playlist should be very fresh.

Many years later, after working in various formats and comparing how each station rotated music, there was one common denominator – oldies, also known to radio programmers as recurrents. They are the historic glue that balances the genre du jours that challenges programmers in every format.

But songs like that are the backbone of and inspiration for new artists. Many earlier Alternative hits, including songs by Nirvana, Jane’s Addiction, and Social Distortion lay the tapestry for the newer artists to be played against. I don’t think that a commercial Alternative radio station was viable here until now because the format didn’t have enough depth – not enough well-known oldies.

There are also a number of sub-genres inside of the Alternative sphere that represent crossover to the dance, pop, rock, and folk charts. It can’t be easy to accommodate that wide a spectrum of listeners.

As 92.1 fm can honesty say in one of their fairly dry prerecorded breakers, “Fuzz…the Only Alternative.” That they are, and as much as I am happy to have an Alternative station on the dial, I would definitely agree that they could step up the playlist and give us many more new artists to listen to and maybe even some popular originals by local bands.

Following Mike’s posts, I’ve seen plenty to indicate that he knows his way around current and trending Alternative hits and groups. Since I am getting older, I thought it might be cool to tap his expertise and pull some fresh ideas into this quarterly chart. Mike was quick to respond and supplied me a list of 10 current alternative songs that he thought everyone should know. I knew two or three of them already, and they were good picks. We both had Young the Giant at Number One. The rest of his playlist blew me away as I sat and watched every video on YouTube.

“There is Something for almost Everyone in Current Alternative Music”

Further delving into the current state of Alternative Music, Mike offered the following: “The alternative scene right now is great because it offers really different styles/genres like indie-ectronica, synthpop, and indie rock all meeting up. Some heavy ’80s influences as well as well as Motown samples find their way into some tracks.”

Mike also noted that there a number of “more polished garage bands” on the scene. The Spotify playlist of the song suggestions that he sent me is here:

“This list is kind of a blend of all of that,” Mike explained. “Listening to new Alternative really requires the listener to really open up to a lot of styles of music to enjoy.”

That said, here’s the chart:

Vegas Arcade will be back in the Tunkhannock area with a show at the Lake Carey Inn on Saturday, April 19. In the meantime, you can catch them at the Vspot in Scranton on Friday, March 28, and in Bar Louie at the Mohegan Sun Resort on Saturday, March 29.

Next time, Mike, you’re welcome to give me a top 20. I really enjoyed and appreciated your input.