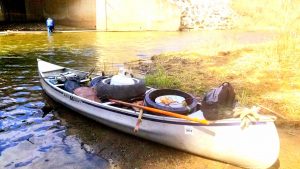 Helping to pick up litter near the Great Bend/Hallstead exit of Route 81 in late March were (top) Lydia and Kiera Andusko, Madison Carpenter, Ben and Lilly Bleck and Kate Bowyer. It didn’t take by volunteers associated with Friends of Starrucca Creek long to fill a canoe (above) with trash during a recent outing.

An early spring and the unexpected layoffs of so many area residents due to COVID-19 might prove to be a boon for roadways and watersheds used by travelers and recreationists. Groups of 12 to 20 people have been gathering at locations around Susquehanna, Lanesboro, Hallstead, and Great Bend to pick up trash, while maintaining safe distances and other precautions related to the health crisis.

A number of the participants have been pulling trash from local streams and illegal dumping sites for a decade or more, but interest seems to be on the increase this year. Some of the cleanups are organized by groups and others by individuals, and their efforts have been overlapping in the best way possible.

Susquehanna borough council member Dana Rockwell, members of his family and Friends of Starrucca Creek have perhaps participated in the most cleanups, helping to maintain sections of the creeks and river they love to kayak and fish. But Rockwell maintains that there are other long-time stewards of the local environment, and this year they’ve gotten more help. 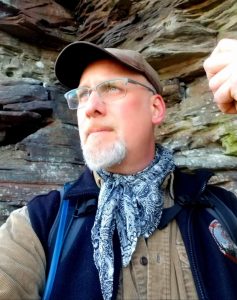 “It’s easy in summer to think that it’s not a problem,” Rockwell related. “Spring began earlier in March this year and, when people started getting out, they noticed just how much trash was out there.” The relative lack of weeds and underbrush at the end of a somewhat mild winter laid bare the extent of illegal dumping. “It was the perfect time to heighten awareness of the littering problem that we have in northeast Pennsylvania. And, with no school and no sports, more people have the time to help us.”

Efforts by Rockwell and Friends of the Starrucca Creek Viaduct have been paralleled by members of the Stone Bridge Lions Club and, more recently, the Susquehanna Organization & Business Alliance (S.O.B.A.).

“We meet often to discuss the potential revitalization of Susquehanna and getting local business leaders together to see how we can attract people from the interstate,” Rockwell said of the recently formed S.O.B.A. and members Tara Kelly and Erika Mills. The first outing of the year was less organized than those that have followed and involved about 20 people in Susquehanna in the borough and along the roadways leading in and out. “We were encouraging people to take care of areas near to their homes. Dumping trash shows a tremendous lack of caring.”

The following week, a group in orange vests could be seen picking up trash along Interstate 81 at the Hallstead/Great Bend exit. “That’s been a disaster for years, and we were tired of looking at it,” Rockwell remarked. In addition to participants practicing social distancing, he was relieved that traffic was light that day. But the amount of garbage surpassed almost every other area he and the other volunteers have tackled.

This past weekend, volunteers donned hip waders and addressed a two-and-a-half mile stretch of Starrucca Creek from the Brandt railroad bridge to Starrucca Viaduct, toting a canoe over slippery rocks in the frigid water. It didn’t take long to fill the boat with a variety of trash, including a barbecue grill propane tank and a sump pump and hose.

Rockwell concedes that “creek sweeps” are not for everyone, due to rugged terrain and relative inaccessibility. But, after nine years of cleanups with the Friends group that moved from the streams to the river to hiking areas and vistas, Rockwell wants to return the focus to the creeks.

Friends members are planning their biggest annual cleanup on Saturday and Sunday, May 2 and 3, meeting on Starrucca Creek Road at Stevens Point. Those interested in volunteering can follow the Friends of Starrucca Creek Facebook page for more details. Gloves and vests will be provided, but the supply of garbage bags is running low.

Montrose High School teacher Mike Matis has been leading the efforts of the Lions Club, which has officially adopted the stretch of Route 92 from Susquehanna to Jackson that members clean twice per year. They have also scoured Route 171 between Susquehanna and Hallstead in conjunction PennDOT. Matis called the latter “a pretty daunting task. There was a pretty substantial amount of trash. We all but filled a tri-axle.”

Matis welcomes Rockwell’s efforts and noted that the two groups have been helping each other more in recent years. “It’s not a competitive thing. We both have the same ideas that we want to see our area cleaned up,” he stated. “It’s pretty disturbing to see the amounts of garbage along the creeks.”

A post Rockwell read on the Pennsylvania Mushroom Hunters Facebook page suggested that Pennsylvania is simultaneously among the prettiest and the trashiest. “It doesn’t have to be that way,” he stated. “I’m sort of obsessive about picking up litter, but fifty percent of people don’t care at all and will continue to dump.”

In the course of cycling back to the creeks, Rockwell has noticed some improvements. “After the big flood, there was all kinds of debris, including tires and car parts,” he recalled. As he and the volunteers get back into the streams where they started, they are not seeing as many large items. But some people with properties along the creek bank tend to stack trash that finds it way to the creek during rain and wind storms. “But there does not as much blatant dumping,” Rockwell maintained.

Matis would like to conduct another cleanup of the Route 171 stretch in mid May. He posts details of the events on the Susquehanna Community Litter Pick-Up Facebook page. A lot of roadside litter also works its way down to the creeks, he explained. “Cans and bottles get on the side of the road, and the water diverts them to the drainage ditches and into the watershed. It’s disheartening,” said Matis. “We’ll finish a cleanup, and the next day there’s already new deposits.”

Rockwell and Matis hope their combined efforts will raise awareness of the problems caused by littering, as well as opportunities to get together to clean things up. “Hopefully, it makes a few people think twice about it, and we can make it that much better,” Matis suggested.

“I feel like the good people of our communities could stay on top of it if they all get involved,” Rockwell concurred. “But, if just a few people are doing it, that won’t happen.” 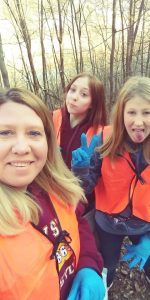