Susquehanna County Dairy has its Day at the Pennsylvania Farm Show

Dairy royalty is a staple of the Pennsylvania Farm Show. Not only do princesses and dairy ambassadors roam the Farm Show Complex and greet visitors, they are afforded a large corner of the Northeast Hall where they host a variety of interactive displays for family members of all ages. Though not required, the state’s 23 dairy princess and 215 male and female dairy ambassadors are encouraged to attend the Farm Show and take turns staffing the area.

Enjoying her second opportunity to talk with Farm Show guests after several years of presenting primarily to school children was Susquehanna County dairy ambassador Charlotte Quick. With rural diary farms facing ongoing challenges like low milk prices, Charlotte hopes her work with youths will have a long-term, positive impact on the industry.

On Jan. 10, she spent much of the day hosting a spin-to-win game and giving away dairy-related trinkets. It also served as stop #16 for the Ag Explorer contest through which Farm Show guests could win prizes by filling out a scavenger hunt-type program. The Dairy Corner was one of the most popular stops.

The wheel featured various elements of diary production, and Charlotte asked questions of players based on the topic on which the dial stopped. Though she did occasionally refer to a booklet for some of the questions, the knowledge that Charlotte has gained over the years allowed her to seemingly pull most of her questions out of thin air.

“Kids are amazed at how much cows eat every day,” Charlotte remarked. The answer – 100 pounds of feed.

In addition to the Dairy Promotion program, Charlotte remains a member of Susquehanna County 4-H. She placed with a heifer at a state-sanctioned show in September and won a third-place ribbon at the Farm Show for a tri-fold exhibit (below) focused on the many aspects of recycling on a dairy farm. Since her last appearance at the Farm Show, Charlotte also had the opportunity to attend a state Holstein Association Convention in Reading last February.

Of the skills that she has polished through her Dairy Promotion experience, Charlotte said, “Public speaking has definitely gotten easier.”

Charlotte is the daughter of William and Allison Quick and is home-schooled as a freshman. She has as many as five more years to move up through the ranks of Dairy Promotion. 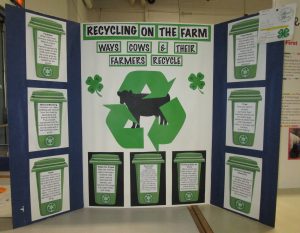