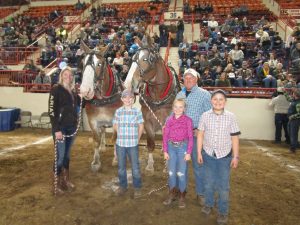 Representing the Harriman family of Sullivan County at the 2020 Pennsylvania Farm Show last week were (above, from left) Emma Byler; Rowdy, Payton and Casey Harriman; and Lucas Yarish. Belgian Draft horses Buzz and Rock finished fifth among eight teams entered in the Heavyweight pulling division. In top photo, Emma and Rowdy drop the hooks in the eyelets on the sled, which sets the horses into motion.

Pennsylvania Farm Show guests entering the horse barn last week were immediately awestruck by a large pair of Belgian draft horses just inside the entrance named Rock and Buzz. Families clamored for a better view and photo vantage points of the two as the horses nuzzled and kissed each other over the dividers between their stalls and marveled at Rock’s soft hair.

Rock and Buzz, ages 5 and 4, respectively are owned by Casey Harriman and Emma Byler of Nordmont. They were at the Farm Show to compete in the Heavyweight Pulling contest held on Jan. 7. Not only are the horses themselves in the heavyweight category at 2,250 and 2,400 pounds respectively, more weight is added to the sleds they wrench across the sawdust floor of the Equine Arena for each heat, starting at 4,000 pounds and climbing past 10,000 for the winners.

Casey has been a Farm Show participant for at least the last 15 years, following in the footsteps of his father, Jeff Harriman, and his uncle, Dale Gordner, who picked up some big wins some decades ago in his days as a handler. The blue ribbons have eluded Casey so far, who jokes that, since 2004, he has racked up “lots of impressive losses and high hopes.”

The family tradition continues, as Casey and Emma were joined in the ring by Casey’s son Rowdy. Casey’s daughter Payton, who helps at home with the horses, was in the stands to cheer them on with another half dozen relatives, including Jeff and Casey’s mother, Cathy.

The youths’ friend, Lucas Yarish, is a regular helper at the Harriman farm and was also on hand at the Farm Show to help feed, tack and keep the stalls clean. The youngsters raise horses, ponies and pigs together and take them to events as members of the Backwoods 4H Club.

While Rock and Buzz obviously get along well, the remarkably different personalities of the pair of Belgians is due to their backgrounds. Rock has a sweet disposition and was extremely accommodating to the many strange hands that reached into his stall to pet him before and after the competition. Buzz, on the other hand, is a bit of a rascal, spilling the contents of his water pail almost as soon as it was filled and knocking anything around his stall that he could move.

“Buzz is a little nervier. He came directly from an Amish Farm in Indiana as a work horse,” said Casey. “That was the first time he’d been around so many people. But he did OK.”

“Rock came from another puller, so he has been loved.” Emma related.

As a team, Casey admits, “They’re a little green” Nonetheless, he added, “They were both bred to pull.”

The two were paired up last year, with only Rock having some experience in competitive pulling. They participated in three events, including the Bloomsburg Fair. After a few attempts at each venue, Casey noted, “We just quit with them. We never really pushed them that hard.”

Though “quit” isn’t deemed progressive terminology in most sports, among people at least, it is common with horse pulling. The animals are pulling extreme weights for short distances. At such heightened intensity, the physical and mental well-being of the horses is always a serious consideration.

“You want them to finish on a high, like a weight lifter. That’s a confidence boost,” Emma explained. “If you pull them hard every time, it gets to their head.”

Horse pulling is one of the most popular events at the Farm Show, so the Equine Arena was all but full when the Harrimans entered the ring with seven other teams as the country song “Family Tradition” by Hank Williams Jr. blared over the sound system.

The most intense moment of each pull is the hookup, which Rowdy was doing for the first time at the Farm Show with Emma. “When you drop that hook, they hear that click and they take off,” explained Casey, who drove the team.

When handlers know that their horses aren’t a the top of the pack, setting their sights a little lower provides more satisfying results. Casey had set his sites on Victor Bonacassi, a fellow teamster from western Pennsylvania who was running a horse that Casey had sold him in the summer. Rock and Buzz finished fifth out of the eight teams, behind the target team, successfully pulling 9,050 pounds. But Casey was satisfied that he’d pushed Bonacassi to quit on the next round.

Brothers Charlie and Scott Brown of Westmoreland County took first and second place. Third place went to the Buhler team from Elk County. The cash prize of $300 for the Harrimans is modest compared to the investment, but Casey was pleased with the gains made by Rock and Buzz. “It’s more about bragging rights,” he stated.

Happy, healthy horses can successfully pull well into their teens. “Their peak years all depends on what’s between their ears,” Casey said of the mindset of the horses. “We’ll work on building mass and power, and they’ll keep improving.” 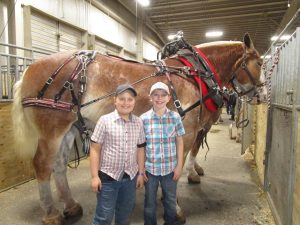 Fellow Backwood 4H Club members Lucas Yarish (left) and Rowdy Harriman have a moment to relax before taking the Harriman’s draft pulling team to the arena. 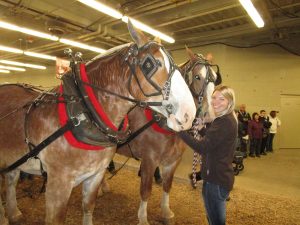 Emma Byler prepares to take Buzz and Rock into the PA Farm Show Equine Arena for the pulling competition.