Sullivan County director of elections Hope Verelst (third from left) and chief clerk Francine Doyle (fourth from left) are congratulated by commissioners (from left) Brian Hoffman, Donna Iannone and (second from right) Darlene Fenton, and county solicitor Ken Levitsky for receiving the Outstanding Chief Clerk/Administrator Award from the County Commissioners Association of Pennsylvania. The citation recognized their work in preparing the county for sweeping changes in the elections process and helping to secure benefits for county employees following the governor’s emergency declaration in the spring.

(Also published in the Sullivan Review)

Sullivan County may be the second smallest in the state based on population, but election codes that had not been updated in 82 years were a big deal to the county’s Board of Elections and Voter Registration. When the state also mandated that counties acquire new voting machines that would produce paper ballots, elections director Hope Verelst and the Sullivan County Commissioners jumped into action.

For these and related endeavors, Verelst and chief clerk Francine Doyle were awarded last week the Outstanding Chief Clerk/Administrator Award by the County Commissioners Association of Pennsylvania (CCAP). Though the press release from CCAP specifically credited Verelst, she maintained that it was a group effort from the start.

“New systems were to be implemented by April 2020. However, our county didn’t want to wait for a presidential election cycle to implement,” said Verelst, who noted that the three commissioners, Doyle and county solicitor Ken Levitsky were immediately engaged in the project. “We scheduled vendor demonstrations for all of the PA-certified machines, compared features and pricing, and selected the best equipment for our county.”

Sullivan County voters were able to successfully use the new Clear Ballot system in November 2019, well ahead of most of the counties in the state. “These new machines provide excellent security features and updates reporting capabilities, and we are now able to build ballots in-house,” Verelst explained.

Commissioners Brian Hoffman, Donna Iannone, and Darlene Fenton credited Verelst for spearheading efforts for the county, noting in an application submitted to CCAP on her behalf, “This was a monumental responsibility…a process that had to be defendable to the public. She conducted poll worker training sessions and four public demonstrations of the new equipment, garnering public trust in the voting machine transition.”

Act 77, passed in October 2019, also presented challenges to election boards that were yet unaware of an unprecedented increase in mail-in ballots coming their way. Long before the pandemic and a heated presidential election would combine to make mail-in voting a more viable option for many people, the Sullivan County team began assessing their current system and bracing for the uncertain future.

“Election security and voter education were two of the top priorities,” Verelst related. “Again, we looked at what was best for our small county and implemented a system to accept applications, verify and process the applications, and send and receive ballots securely.” The elections department embarked on an education campaign via local newspapers, Facebook, and the county’s website. Verelst also took countless phone calls and did her best to answer a variety of voter questions.

“Recognizing the timely benefit this would have on reducing foot traffic in precincts during a public health emergency, Hope instituted a proactive public information initiative,” the commissioners wrote. “The absolute crescendo of this public information campaign was her original production of a five-minute instructional video regarding the mail-in-ballot process and the integrity of the voting method.”

In addition to adopting and implementing new voting systems, the commissioners noted that Verelst was selected by the state as one of six county elections employees to participate in a PA Department of State (DOS) work group charged with conducting a post-election, risk-limiting audit pilot program. Along with nine other non-DOS board members, they used a scientifically designed method to check the accuracy of the 2019 election outcomes. By helping to strengthen the Commonwealth’s existing election safeguards, the commissioners stated, “Hope’s inclusion and contributions to this group revealed the respect she’s earned among her election professional peers.”

When the pandemic produced its first surge of cases in the spring and Gov. Tom Wolf issued his first emergency declaration, Verelst collaborated with elections officials from other counties to lobby for a change in the state’s primary election date from April 28 to June 2. “She proved to be an influential voice among her state-wide peers during extraordinary times,” the commissioners offered. In the application, they noted that staff from Sen. Gene Yaw’s office credited Verelst as one of the first elections directors they heard from regarding the issue.

Chief clerk Doyle was cited in the commissioners’ letter of support for her work with Verelst in interpreting rapidly evolving COVID-related legislation from the governor’s office and PA Department of Labor concerning employee benefits such as FMLA leave, emergency sick leave, employment compensation, and work place safety. “It took a remarkable team effort to keep up, document, and accurately inform nervous employees of these changes,” the commissioners wrote. “Any other two people, and it might not have happened as seamlessly as it did.”

The commissioners submitted the application in May, noting that much of Verelst’s efforts were accomplished during the heightened state of emergency associated with the pandemic in its early stages. “These tasks taken individually are worthy of recognition. But to manage these tasks back-to-back or concurrently in such a short period of time is damn near herculean.” For the 2020 general election in November, 3,612 Sullivan County residents participated, representing 83.44% of registered voters. Of the ballots cast, 829 or 19.15% of the ballots were by mail or absentee ballots.

It would not surprise most people who already know Verelst that she was humbled by the accolades and requested that the award not be mentioned during the commissioners’ recent public meeting. She was unaware that CCAP would get the word out nonetheless. “I was truly shocked,” she stated. “The main takeaway I would like people to have is that elections in Sullivan County are secure, honest and fair. We take our part in protecting democracy very seriously and are very proud of the good work we do here.” 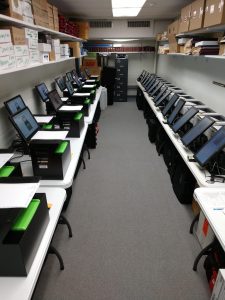