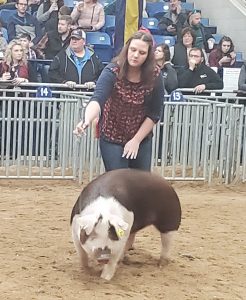 Corbin Bruce, 10, (top) waits for his turn to show his registered Hampshire, Boss Hog, to the Farm Show judges. Shelby Bruce, 16, (above) puts her Hereford Cross hog, Lizzie J, through her paces at the Pennsylvania Farm Show.

The Bruce family has not had the best of luck over the past few years, but a trip to the 2020 Pennsylvania Farm Show gave Shelby, a junior at Athens High School, and Corbin, a fifth-grader at SRU Elementary School an opportunity to show hogs and subsequently send them to market. Both are members of the North Towanda 4H Club. Shelby is also a member of the Athens FFA.

The Bruce’s lost their East Smithfield home to a fire in September 2018. Nothing has seemed certain to them since, let alone this year’s trip to Harrisburg for the Farm Show. “I would like to thank all of the people who made this possible,” said the siblings’ mother, Melissa Bruce.

Melissa was a long-time 4-H member who showed horses during her youth and passed on a love of raising animals to Shelby and Corbin. Though they raise and show other kinds of livestock, including cows and sheep, both maintain that hogs are their favorites.

“I just have a love for them,” Shelby remarked. “Every year, there’s a different personality, and I really form a bond with them.” She took a Hereford Cross named Lizzie J to Harrisburg that finished in fifth place. Lizzie’s strong points, Shelby explained, included her broad front shoulders.

“You can just lay with them in the pen,” Corbin said of the gentle nature of domestic swine. On Jan. 4, he showed a registered Hampshire, a classic black and white breed, that he affectionately calls Boss Hog. It was his first time taking livestock to the Farm Show, though he has participated at the Troy Fair for several years.

Boss Hog was ranked in 11th place in his division. Corbin suggested that it is not winning at these events that matters as much as what he learns from them. If his pig were stockier, Corbin was told, he would likely have placed higher.

It was Shelby’s fifth year participating in the PA Farm Show, but she started showing rabbits with her local 4H when she was eight years old. “I like meeting new people and catching up with people that I have met at other shows,” she related. “We learn a lot from each other.” Shelby was sad to see the pigs go to market, but she and her brother understand that letting them go is part of the job of raising them.

After showing their hogs, Corbin and Shelby were anxious to venture off into other parts of the massive Farm Show complex to see what else the 104th annual agricultural expo had to offer. Neither had seen the popular butter sculpture yet, and Corbin wanted to shop for some souvenirs.