Seventy-Two Years and Counting – The Wilsons of Wyoming County

In: People In the News
With: 5 Comments 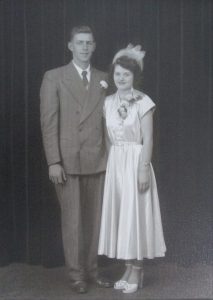 June and Paul Wilson still reside on their century farm, which has been in the Wilson Family since 1914. Above, Paul and June Wilson’s wedding portrait, taken a day after their May 28, 1949 wedding.

Paul and June Wilson celebrated their 72nd wedding anniversary on May 28. Through those previous seven-plus decades, they have lived in just two different houses on the same farmstead in Lemon Township that has been in the Wilson family for 107 years. The property was awarded Century Farm status in 2014.

Paul is the son of Robert and Mary (Fisher) Wilson, and June’s parents were Harrison and Pearl (Quick) Jenner. They met through their siblings, Bruce Wilson and Jean Jenner, who got married in 1948. The Jenners lived in East Rush, not too far into Susquehanna County. Bruce and Jean passed away in 1991 and 2001, respectively, having lived most of their married lives in Syracuse, NY.

Paul was a driver for Smith Johnson Trucking at the time, hauling milk cans and delivering coal and cinder blocks, after serving in the Signal Corps of the U.S. Army for a year on Okinawa, Japan. June was a senior at Rush High School. The Rev. David Dennis of the Rush Methodist Charge performed the ceremony in the Jenner’s living room. June is pretty sure that both her sisters and her two brothers were in attendance, but some of Paul’s three brothers and three sisters lived outside the area and were not among the estimated 20 guests.

“It was a very conservative wedding compared to what they have now,” said Paul.

“We had some cake and ice cream at the house, and then the four of us (the wedding couple and attendants Richard Stang and Connie Lou Reynolds) went to Binghamton to the Park Diner for supper,” June recalled. They stayed at the Carlton Hotel the first night of a brief four-day honeymoon, as they had an appointment in Binghamton the next day for their official wedding portraits.

After the wedding, Robert and Mary moved into what had once been the hired hand’s house, and the newlyweds took up residence in the main farmhouse. Regardless of what other jobs Paul and June took up or community service they performed as members of their church and other organizations, farming was front and center in their lives. Paul had worked on one of the first pipelines to run through the region and had an opportunity to follow the outfit to Atlanta, but chose instead to take over the dairy farm from his parents.

As their dairy herd slowly grew from 18 to 79 head of cattle, the Wilsons were active members of the Eastern Milk Producers Co-operative. An avid outdoorsman, Paul was subsequently a member of the Lymanville and Meshoppen Rod & Gun Clubs. He was a founding member of the Endless Mountains Antique Tractor Club, which eventually became the Endless Mountains Antique Power Association, and remains passionate about tractors. After years of winning awards with his restored farm machinery and participating in pulling events, he still enjoys driving them in the Memorial Day and Triton Tractor parades in Tunkhannock.

June jokes that she had no time for hobbies (but no regrets) while she was busy raising the couple’s six children – Gail, Donald, Larry, Charles, Linda and Brenda – though she was also a member of the Lymanville Methodist Church Ladies Aid Organization and occasionally played the piano there. She also worked alongside Paul on the farm when she wasn’t running errands or doing housework. “I was the hired man until the kids got old enough to help,” she said with a laugh.

The truth is that June always loved to bake. She won first prize in her Ladies Aid group with a cake she entered in a contest, but it was her pies that became locally famous, available for purchase for many years from a local farm market and Davan’s General Store. “There’s never a box mix in this house,” she proudly remarked. “I make everything from scratch, even the pudding.” She insists she doesn’t have a favorite, but Paul was quick to name butterscotch as his.

When their son, Donald, came home from the service and expressed an interest in taking over the operations of the farm, Paul invested in some heavy equipment and started doing excavation work locally, including building sand mounds and opening up quarries. He served as a Lemon Township supervisor for at least 15 years and was also the township roadmaster.

As their children got older, Paul and June pursued motorcycling and snowmobiling with friends. Paul delighted in giving is mother, who lived to be 103, rides on both. He and June also enjoyed attending county fairs and square dances at the Rod & Gun Club. They drove across the country a couple of times, visiting their adult children as they moved to different states.

After all of the children had graduated from high school, June wanted to get out to work. After a year working at the River View grocery store in Mehoopany, she worked for five years at the Country Store in Lemon. But her favorite job of nine years was as a cafeteria worker at Tunkhannock Area High School, where she enjoyed the socialization with fellow employees and serving the students.

The Wilsons have been blessed with 12 grandchildren and about 23 grandchildren. Sadly, daughter Brenda and her son, Devon, have passed away. Paul is also grateful for the number of friends he has made through his road work and time on the township board of supervisors. “I got to know the neighbors really well,” he stated.

The Wilsons are modest about their simple beginnings and the adventures they have shared. When they got married, they had no stove or refrigerator. They didn’t even have an indoor bathroom.

“We had a one-seater!” Paul joked in reference to their outhouse, which were still prevalent at the time.

“Most people today can’t even imagine what that is like,” June stated.

“I had a car that was paid for, and that was it,” said Paul. But he and June valued what they had and slowly built on that foundation to secure their livelihoods.

Things are much quieter on the Wilson Farmstead these days. Donald retired from farming in the late 1980s, shortly before Paul and June moved into the new house on the property that they still occupy. Paul continued to do some road and excavation work up to about three years ago. Now the couple enjoys the calm of the countryside and visits from their still-growing family. If they can’t get together in person, the couple has learned how to participate in Zoom meetings online.

When asked what advice they might extend to today’s young couples on marriage and relationships, Paul quickly replied, “Both partners have to contribute 60 percent. That’s what my mother told me, and it’s a good formula.” 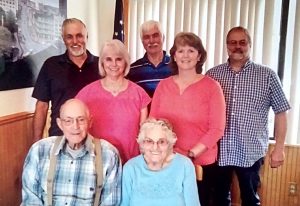 The Wilson’s 70th anniversary was celebrated with their five living children (from left) Donald, Gail, Larry, Linda, and Charlie. Their daughter Brenda Wilson Reichart passed away in 2010. 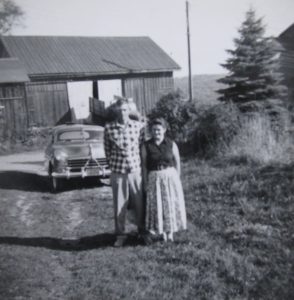 Paul and June Wilson on the Lemon Township farm in 1957. 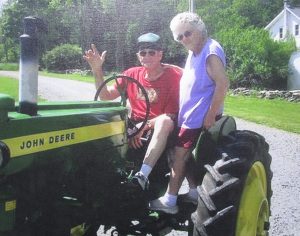 Paul Wilson was a founding member of the Endless Mountains Antique Tractor Club and still likes to go for tractor rides in parades and around the couple’s property. 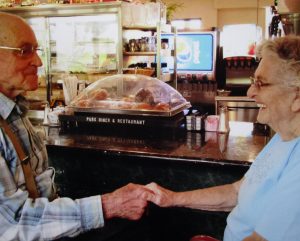 For their 70th anniversary, the Wilson’s children took them back to the Park Diner in Binghamton, where they had dinner on their wedding day.

The Wilsons of Lemon Township may be the longest-married couple in Wyoming County, but there were some runners-up who came close and also received numerous nominations for our story. They round out the Top Five as follows: 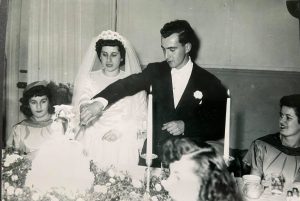 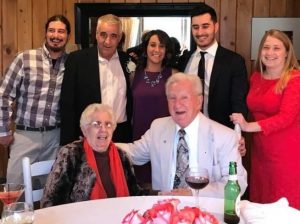 Anthony & Helen Talarico of Tunkhannock celebrated their 70th anniversary last year, having been married since October 7, 1950. 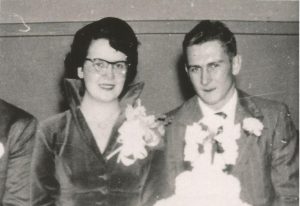 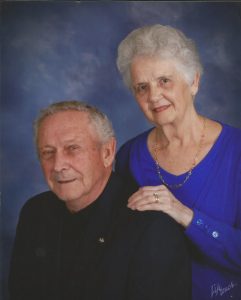 Ed & Janice Shaffer of Tunkhannock reached 69 years in 2020, when they commemorated their November 11, 1951 wedding. 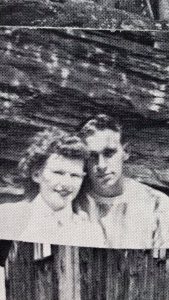 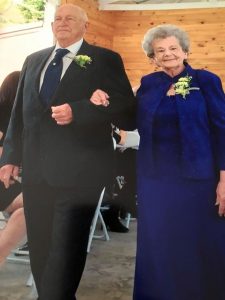 Jack & Shirley Patton of Beaumont celebrated their 69th anniversary on June 21, having been married since 1952. 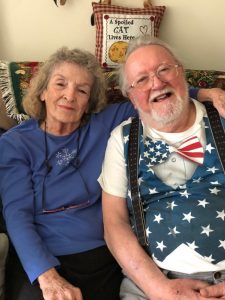 William & Barbara Foster of Mehoopany are coming up on their 69th anniversary on August 30. They too were married in 1952.