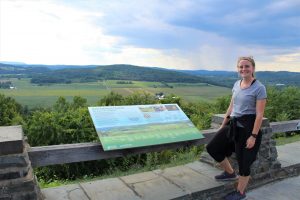 Savannah Schools, new administrative assistant for the EMHR, at the Tunkhannock Viaduct (top) at Nicholson and at the Marie Antoinette Overlook (above) near Wyalusing.

Competition was brisk to fill an opening at the Endless Mountains Heritage Region (EMHR) for a new administrative assistant. Executive director Cain Chamberlin reported nearly 70 applications were submitted for the position in a relatively short period of time. Savannah Schools of Herrickville was selected from the pool of finalists and began working with the EMHR on Aug. 15.

“We were amazed at the massive amount of interest in the position with our small non-profit organization. It was a long process in narrowing down the applications to candidates we wished to interview,” said Chamberlin. “Savannah really stood out among those we interviewed for the job. She has a strong passion for the outdoors, she’s very interested in our local history and heritage sites and, as a native of Bradford County, she’s familiar with the region we serve. She came highly recommended and is very qualified, so we’re ecstatic to have her on board.”

Savannah is the daughter of Jim and Lorrie Schools and a 2013 graduate of Wyalusing Valley High School. She picked up a degree in business management from Misericordia University, specializing in healthcare management and minoring in gerontology. Some may be familiar with her as a volunteer assistant for the Wyalusing track and cross country teams or as a teller at various PS Bank branches.

Since 2018, Savannah has worked for Futures Community Support Services, most recently as a billing analyst.

“I loved working with all of the people, especially adults with disabilities,” she said of her previous job. “I learned a lot about just being kind to people and not judging people.” Her favorite part of working at Futures, she related, was the visits from individuals receiving services to share the highlights of their day. “They were always just so happy.”

Outside of work, Savannah continued the passion for running that she had honed in high school. She also started kayaking, first with her father who would take her fishing on Cooks Pond, then on the Susquehanna River when she paddled with friends from Wysox to Terrytown. “I love being outside,” Savannah remarked. “It’s hard being stuck inside working on a nice day.”

As an administrative assistant for the EMHR, she will help to coordinate the organization’s growing number of outdoor recreational adventures, including paddles, hikes, and bicycling events. She will also work closely with project partners who leverage grants from the EMHR and the PA DCNR to enhance programming and facilities or develop new initiatives. Savannah has a penchant for museums and looks forward to visiting all of them within the EMHR’s four-county service area.

During her first week of employment, she was treated to a day of exploration of a number of heritage sites supported by the EMHR over the years. Among the stops were the Marie Antoinette Overlook, Nicholson Heritage Association, Martins Creek Viaduct Overlook, Dietrich Theater, the Historic Dennis Farm, and Salt Springs State Park, to name a few.

“The viaducts were incredible. It’s amazing that they still exist and are used every day,” Savannah said of the massive concrete railroad bridges crossing Martins Creek in Susquehanna County and Tunkhannock Creek in Wyoming County. “I went home and asked my parents, ‘How had I never seen them before?’”

She also took note that there are trails specifically for running at Salt Springs State Park, and she intends to return with some fellow runners to give them a try. Savannah is also looking forward to the EMHR’s Fall Heritage Paddle on Oct. 1 that will benefit the Bradford County Historical Society.

“We’re already enjoying working with Savannah and look forward to her input, creativity and all the other great assets she’ll bring to the position,” said Chamberlin. “We also want to thank our previous administrative assistant, Vanessa Billings-Seiler, for raising the bar for this position during her years of dedication and service to the EMHR. Hers are incredibly big shoes to fill.”

The Endless Mountains Heritage Region is one of 12 Heritage Area across the Commonwealth designated by the PA Department of Conservation & Natural Resources. The EMHR has supported and promoted historic preservation and outdoor recreation in Bradford, Sullivan, Susquehanna and Wyoming counties since 1998. To learn more about the organization, including membership, grant opportunities, and upcoming events, interested readers can log on to emheritage.org. 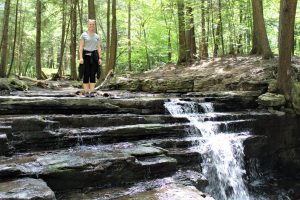 During her first week of work, Savannah had the opportunity to visit numerous heritage sites, including the Martins Creek Viaduct Overlook near Kingsley (above) and Salt Springs State Park in Susquehanna County (below). 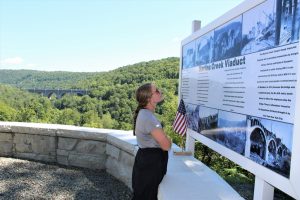