In: Trades Education
With: 0 Comments 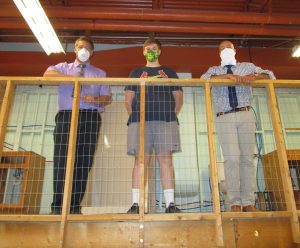 Normal temperature – check. No flu-like symptoms – check. Safe distancing – check. Mask on – check. That’s how tours of the Susquehanna County Career & Technology Center (SCCTC) for sophomores from seven area school districts began on July 15, when instructors and administrators rolled out the red carpet one student at a time for a modified open house event.

Normally, all of the students would have been invited to meet in the auditorium of Elk Lake High School in May for an orientation address by SCCTC executive director Dr. Alice Davis before being sent in groups to their respective classrooms and shops. But, as everyone knows, the upcoming school year will be unlike any before it due to the COVID-19 pandemic.

“It’s certainly changing the way we do things,” said Culinary Arts instructor Dave Dunster who, along with fellow instructor Jill Radicchi, is expecting 20 new students. “It feels like it changes every week,” Radicchi agreed. Teachers across the campus won’t be able to determine until the students return for classes in August the precise balance between virtual and hands-on learning, the very hallmark of trades education.

“We are still going to do live work to the best of our ability,” Davis explained. “We’re keeping the hands-on component, but we are stretching it out.” Cosmetology students for example, will use every other station. The shops are self-contained with their own restroom and locker facilities.

The school will be sanitized on an ongoing basis, she added. In addition to regular cleaning, SCCTC has purchased medical-grade foggers for classroom buildings and bus foggers that have already been tested and have proven effective in killing germs. Parents have been impressed with their efforts, telling Davis that they feel safe sending their children there.

Students visiting the school on July 15 seemed to be taking the modifications in stride, concentrating more on getting to know more about the programs in which they have enrolled, checking out the labs and amenities, and learning what classes they will be starting first.

The instructors welcoming them gathered pertinent information and provided summaries of the different career paths available to them as the students fine tune their interests over the next three years. Parents sought additional information about job placement and dual enrollment, which allows graduates to transfer credits to other institutions for continued education.

Elk Lake sophomore Desirae Ridall has enrolled in Healthcare Technology, following in the footsteps of her grandmother, Robin Ridall, who made a career of elder care. “I really like helping people, and there’s a lot of different options with healthcare,” Desirae remarked. Though she has plenty of time to change her mind, she is currently interested in labor and delivery, as well as physical therapy.

Dean of Students Will Squire feels the same way about the Welding program, for which he often steps in as a substitute teacher, having been through welding school himself. “Heavy equipment repair is a big one – excavators, bulldozers, backhoes – they require a lot of maintenance,” Squire remarked, adding, “The gas industry and quarries are two of the biggest employers of welders in the area.”

In addition to equipment, he noted, skilled welders are in high demand for building and maintaining gas pads, pipelines, and compressor stations. Squire was among several instructors who reported that they routinely get emails and phone calls from companies in the region looking to hire their best students as soon as they are certified.

Soon-to-be welding student Gage Donald was visiting with his father, Seth. Gage appreciates the challenge of welding. “It’s really fun to do, and you can make a lot of money if you stick with it,” he stated. Though Seth joked that he’d hoped Gage might instead opt for Automotive Repair, he agrees that welding is a solid trade and he has always hear good things about the school.

Squire noted that it is not uncommon for students to change or combine their interests as they work through their studies at SCCTC. “One trade often leads to another, like learning languages,” Squire offered. “You become very self-sufficient when you have trades skills.” Many students from SCCTC go directly from school into apprentice programs without amassing debt, he added.

“And these are jobs that will not be outsourced,” Dr. Davis said of the full roster of programs. Even cosmetology services, which were not initially deemed essential by the government at the onset of the pandemic, were among those in highest demand as soon as the economy started to reopen. “We’ve come to realize just how valuable these jobs really are.”

Cosmetology instructors Kim Cosklo, Amy Bush and Sue Birtch said that visitors to the open house were sometimes surprised by the depth of instruction that can lead applicants to jobs as skincare specialists, nail technicians, stylists, and cosmetology teachers. Incoming students get a broad overview of the options the first year and begin to apply their skills on the public during their second year at SCCTC. During the third year, instructors groom them for state board certification and job placement.

Mountain View High School sophomore Nevaeh Cost is interested in hair styling and makeup. Her Aunt Kim owns a salon in Carbondale. Nevaeh’s father, Nick, is happy that she chose to attend SCCTC, stating, “I’d like her to have a plan for life, and this is a great start.”

Melinda Vanderfeltz, whose son, Corey, was getting an overview of the Building Property Maintenance program from instructor Steve Reinhart and job site coordinator John Gazzillo. Though Corey is currently interested in electrical work, Reinhart suggested that he might develop and equal interest in carpentry, plumbing, construction or repair work.

Dr. Davis noted that she is maintaining contact with the school districts that partner with SCCTC and will continue to arrange tours by appointment. Interested students and parents should apply first online via their respective school’s websites and are welcome to check out more than one program in a visit. To learn more about what SCCTC has to offer, interested readers can log on to www.scctc-school.org. 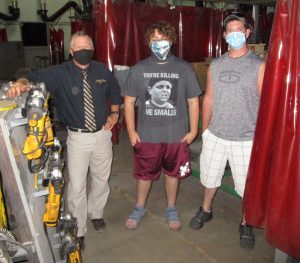 Elk Lake sophomore Gage Donald (above, center) and his father, Seth, met Dean of Students Will Squire (left) in the Welding department on July 15 to learn more about what Gage can expect from his first year at SCCTC.