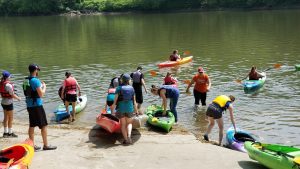 Sullivan County’s parks and trails, including Worlds End State Park (top) will be the focus of a new project by the EMHR in 2020, thanks to funding provided for promotion by the Endless Mountains Visitors Bureau. A Room Tax grant from the Bradford County Tourism Promotion Agency will help the EMHR with its annual Youth Heritage Sojourn, with participants shown above setting in at Sayre in Bradford County in 2018.

The Endless Mountains Heritage Region (EMHR) will receive funding for projects in Bradford and Sullivan counties now that grant requests to the Bradford County Tourism Promotion Agency (BCTPA) and Endless Mountains Visitors Bureau (EMVB) have been approved by commissioners in those counties.

In Bradford County, $1,700 is earmarked for the development of new Susquehanna River North Branch water trail brochures, and $1,500 will be used to promote at least two paddling sojourns on the river. In Sullivan County, the EMHR will develop a program showcasing the growing network of trails there called Sullivan County Bikes & Hikes.

The Bikes & Hikes initiative follows on the heels of the EMHR’s successful Summer Parks series in Bradford County, part of the EMHR’s ongoing efforts to highlight the recreational assets of each of the four counties served by the organization.

“Sullivan County is blessed with unspoiled woodlands and the pristine Loyalsock Creek, which the Pennsylvania Organization for Watersheds and Rivers (POWR) named the River of the Year for 2018,” said EMHR executive director Cain Chamberlin. “The three events we are planning will provide a unique combination of exercise, education and exploration of these natural beauties.”

Now that the $3,000 grant has been approved, the EMHR will work with forest rangers and state park officials to conduct a hike at Ricketts Glen State Park in mid to late June; a cycling event in the Loyalsock State Forest in September; and an October hike at Worlds End State Park to highlight autumn’s spectacular colors.

The water trail brochures will be designed and printed in Bradford County in time for spring kayaking. “We should have them done by March or April,” Chamberlin noted. The EMHR is the designated water trail manager for Susquehanna River’s Upper North Branch. Approximately 3,000 new brochures will be printed and made available at visitors centers and kiosks in outlying areas.

The new brochures will include information about the EMHR’s sojourns and recreational opportunities on the river, as well as a message about environmental stewardship. “There will also be instructions on how to join the 444 Club and begin logging river miles, as well as information for watershed organizations with which the EMHR partners throughout the year to promote and conduct events on and along the river,” said Chamberlin.

The annual Youth Heritage Sojourn planned for May 28 to 30 will start in Bradford County, though the precise stretch of river has yet to be determined. A second paddling sojourn geared to adults will be conducted in late August or September. Many of those details will be decided after Water Trail Committee members meet on January 25.

The Room Tax grants are made possible by the collection of a three percent fee assessed to hotel and bed & breakfast stays in Pennsylvania. The amount is collected by the counties for their respective tourist promotion agencies to distributed by committee to grant applicants.

The EMVB has served Sullivan, Susquehanna and Wyoming counties since 1962, and the BCTPA has served Bradford County since separating from the EMVB in 2014. The EMHR fosters and promotes sites and events related to history, recreation and agriculture in the same four counties. For more information about the organization, interested readers may log on to www.emheritage.org and follow the Endless Mountains Heritage Region on Facebook for current news. 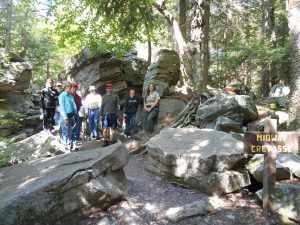 Hikers gather at the Midway Crevasse on the upper trail at Ricketts Glen State Park, where the EMHR will sponsor a hike in June 2020.