Roadside Rest In Limbo – Inmates to Get e-Tablets Soon 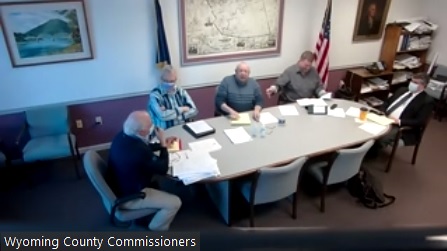 The Wyoming County Commissioners continue to work with Eaton Township officials and other entities to come to an agreement as to how to safely reopen Roadside Rest to the public in the spring.

“As of right now, we are looking into insurance issues and what is legally involved in turning the park over to Eaton Township or some other group,” said commissioner Ernie King, noting that it still unclear how two parcels of land along Bowman Creek fell into the hands of the county several decades ago. “Until these issues are resolved, be patient and please do not continue soliciting donations from the public.”

All three commissioners want the once popular family destination and fishing hot spot open again, King continued, “but we need to get everything into place before we make a final decision.”

New cables have been run to cells at the Wyoming County Correctional Facility to enhance internet service in advance of the delivery of eTablets for inmates some time next week. “There were a few glitches with the internet, that being an all-brick building,” commissioner Tom Henry noted.

Commissioner Rick Wilbur reminded those in virtual attendance that there was no cost to the county for the purchase of the tablets nor the infrastructure. In fact, he added, the grant that made the devices possible includes enough funding to also lower the cost of phone service to the prisoners.

“It’s been darn near a year since they have been able to have visitors over there, so we’re doing what we can to make things a little better for them,” Wilbur remarked.

As the facility reaches 10 months of relative seclusion, Wilbur said that there has not been any recent discussion about allowing visitors back in. Right now, the Wyoming County Prison Board is still following the CDC COVID guidelines and the lead of the state prisons, which are also still locked down.

“Our guys have worked very hard to make sure that they are safe over there,” Henry stated. “We’ve been very fortunate to not have an outbreak.”

“We know it’s been tough on them,” Wilbur said of the lengthy span of non visitation. “For now, we want to keep it as it is, unfortunately.”

The eTablets and additional phone time are intended to help make up for the loss of personal contact, Henry related.

Some Hope on the Pandemic Horizon?

In a general summary of the current COVID situation in the county, Wilbur noted that numbers of positive and active cases are dropping statewide, regionally and locally, and he is hopeful that ongoing vaccinations will drive the numbers even lower. Front-line workers in the medical field have been inoculated, and shots are now going into the arms of others in 1A phase.

The commissioners continue their discussions with Keystone College officials about loan guarantees and reduced tuition for Wyoming and Lackawanna county students. “It’s going to be a great program for a number of reasons,” said Wilbur, who had hoped to have some more details for the meeting. “It will provide more taxes for the county and Factoryville, and a $1,500 tuition credit is a significant help for the students.”

The commissioners revisited a set of Children & Youth Services contracts that were brought to the table at the last public meeting, noting that they hadn’t officially approved adoption assistance agreements for two girls to be adopted by local families.

The board’s public meetings are usually held on Tuesdays, but the more than 20 inches of snow that fell between Sunday and Tuesday forced the closure of the courthouse and other county offices on Monday and Tuesday. Wilbur noted that is was still challenging to get all of the employees into the courthouse on Wednesday with parking restricted to one side of the street at a time to allow for the borough to properly clean the streets around Courthouse Square.

Commissioner Henry explained that he had been out of work for a few days after suffering a fall at the courthouse. He thanked 911, county EMA, and the Tyler Hospital Staff for their response and attention to his back and rib injuries.

The commissioners recognized the birthday on Feb. 6 of Ed Yarsavage, a retired farmer and P&G employee who also once served as a district magistrate. “Ed was extremely good over the years at helping with all kinds of community events,” commissioner King stated.

The project will get underway in March as a committee is comprised. According to the website www.communityheartandsoul.org, the program is geared to serve as a platform for residents from a variety of backgrounds to share ideas and suggestions for reshaping their community’s future.

King noted that is very unusual for the designation to include an entire county. “Most of them are given to boroughs and townships,” he remarked.