Rick’s Report: What’s in a Name? A Lot, Actually

In: Rick's Report
With: 0 Comments 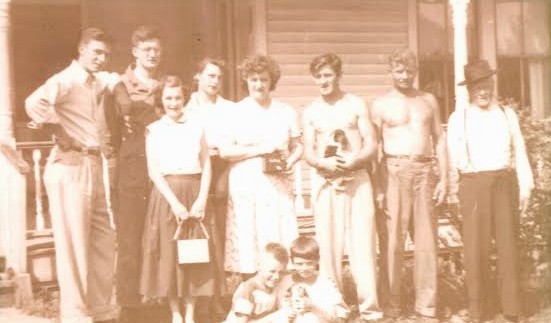 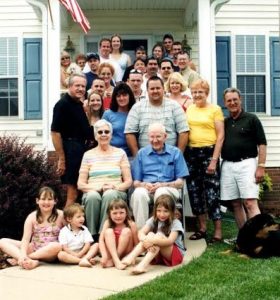 Much to my chagrin, on the first day of each new school year, I endured mild embarrassment as each new teacher read my name aloud for an initial roll call. While my father, Gene, had undoubtedly winced at the mispronunciation of his last name in his younger days, my mother could never have imagined how many people would doubt the legitimacy of my first name.

I was born Rick David Hiduk in Elmira, NY on September 24, 1962, the recipient of a somewhat rare surname and an even less common first name. Everybody outside my family assumed that I was a Richard, and many people to this day want to call me Rich. To my family, I was (and still am) Ricky, which was a cute popular name of the time, a la Ricky Nelson and Ricky Ricardo.

But it was my seemingly unusual last name that so few people outside the Wyalusing area could correctly pronounce, despite its brevity. Conversely, if my name was correctly pronounced, it would surely be misspelled. Ironically, as if the name originally spelled Hajduk in the Czech Republic hadn’t been altered enough, my grandfather John Hiduk almost made things worse for us by trying to add an “e” to the end on, of all places, his roadside mailbox.

I came home from school after one of those first days and demanded to know why I had been named Rick and not Richard. My mother calmly replied, “Because I didn’t want people to call you ‘Dick.’” I was stunned and meekly said, “ok,” as I walked away eternally grateful for her foresight.

Hiduk (pronounced HIGH’ duke) was nonetheless a badge I wore proudly, as the family had quickly entrenched themselves in the greater Wyalusing community as hardworking, deeply spiritual people. Additionally, they were steeped in Old World culture, which I experienced nowhere else in my family.

As with many families, we Hiduk children were reminded that we were of two cultures – Slovac and Welsh – as well as having slightly different perspectives on Christianity. On my mother, Rose’s Johnson/Vanderpool side, we were surrounded by loving happy people but were deprived of a similar cultural experience. If anything, my Mom’s side of the family was almost always centered in central and eastern Bradford County. That was their culture.

For a Hiduk reunion held at least 15 years ago on the old family farm – now the Hope Baptist Church grounds on Hiduk Road – I composed as complete a history of the Hiduk family as I could that was largely based on notes left behind, old photos, and that which was still retrievable from the memories of the oldest family members. The most interesting link to our past was found in Webster’s dictionary by my father. 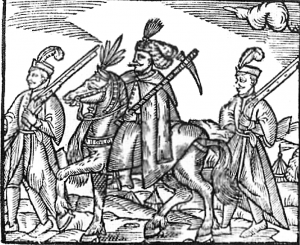 The name Hajduk, spelled that way from the 1400s to today and pronounced much the same as my surname, refers to a tribe of foot soldiers who, at different times during their history, either protected noblemen from harm with preemptive strikes or robbed them and shared their bounty with peasants – kind of like a Slovac Robin Hood. Those in the southern Slov regions were also known for protecting Christians against Ottoman oppression. They often wore fancy, colorful uniforms. 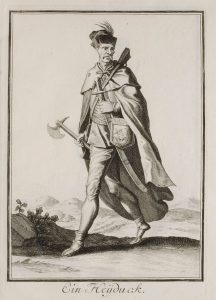 The name Hajduk spread throughout eastern Europe, alternately describing bands of lightly armed freelance soldiers, social bandits, guerrilla fighters, “irregulars,” and even “cattle drovers,” which is fitting for us as the John Hiduks successfully took up dairy farming near Herrickville.

My grandfather’s father was buried behind St. Ceril’s Catholic Church in Olyphant under the marker John Hajduk, next to his wife, Marie Elko, who’d died quite young from cancer. His name was spelled Yuhon as a child, and he later adopted the spelling of his surname given to him in the course of immigration and registration in the 1880s. We called him Zetho, which is Czech for Grandfather.

One of Yuhon’s brothers or cousins landed in New England, rather than New York, and his name was transcribed as Hidook.

The Hyduks were well-known in the Olyphant coal mining neighborhoods, central to the Mid Valley between Scranton and Carbondale. Each of Yuhon and Maria’s children received the name Hyduk on the birth certificate that was written for them by a nun upon their enrollment in school, their first such documentation as American citizens. Except for the third son – my grandfather John.

The nun who registered him wrote the name Hiduk on his birth certificate. His parents being functionally illiterate in American English did not realize the error until it was too late to change it. Who knew what confusion it would cause so many people in the decades to come?

When I moved from Towanda back toward the Wilkes-Barre/Scranton area in 1977, the difficulties posed by my last name made much more sense. There were countless names spelled similarly, but none pronounced the same. As a broadcasting student at Penn State/Wilkes-Barre, those of us with ethnic names were strongly encouraged to find a more Anglo “air name” with which we would be comfortable. I alternately used Dave Richards and Rick Wilding.

While the number of people baring the name spelled Hiduk is down to me, my father and his wife, and his brother Tom and family, the name has flourished in its varying forms in the United States and is still prominently used in eastern Europe. (Thank you cousin Tom for carrying the name as it was otherwise doomed to disappear from the Endless Mountains!)

Meanwhile, numerous futball teams in Serbia and Croatia have the name Hajduk in them, the most popular among them being the KNK Hajduk Split. There are also US actress Staci Haiduk, US National Hockey defender Frankie Hejduk, and Czech Republic Hockey forward Milan Hejduk. There is a Hiduk’s Handyman Service in St. Louis, MO, though no direct relation to us of which I am aware.

My other family names: Johnson, Vanderpool, and Wilding are both easier to spell and to correctly pronounce on the first try. Each has an interesting history, though that of the Johnsons and Vanderpools, who have been here for more than a hundred years longer than the Hiduks, is from the pages of their own unique textbook and best saved for another story. My mother later married Ernie Shartle, which made us part of that family, which is also another story.

As time passes and I become more involved in community affairs, I am also being introduced more frequently in public. After so many years of letting it slide or even professionally using fake names, I find it more important than ever to assert my simple, full name. I guess the best and most tongue-in-cheek way to put it is, “I’m Rick D. Hiduk, and I approve of this message.” Thank You.