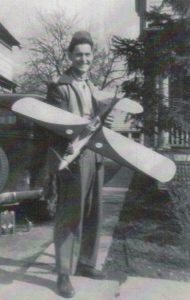 Regular visitors to Round Top Park in Athens Township have become accustomed to an occasional buzz in the air. And the curiosities of those with an eye to the sky have likely been piqued by the site of model airplanes flown from a field at the top of the hill. The airstrip is home to the Valley R/C Model Club, which was formed in 1965 by 16 model airplane enthusiasts from Sayre, Athens, and Waverly.

The first Club flying site was at the west end of the Blue Swan Airport in Sayre. Club officers were president Marty Kandelin, vice president and field manager George Luchaco, and secretary/treasurer Bob Dean. Club dues were $10 per year plus a one dollar initiation fee, and there was a five cent fine imposed on members if ever their planes missed the mowed runway upon landing.

By the end of 1967, membership had grown to 25, and the flying field had been moved twice for a variety of reasons. In one case, it was simply because a farmer who had leased a field to the club needed to return the plot to production.

Charter member George Luchaco passed away in 1970. And, with the club still in relative infancy, its members voted to name each of their subsequent flying fields George Luchaco Field.

George’s son, Daniel Luchaco, a Sayre native, was a Club member by that time and has watched the organization evolve in a number of ways over the past five decades. “My father flew model airplanes all his life, but not radio-controlled until 1955,” recalled Dan, who was five at the time. “When Dad went flying, I went flying.”

The biggest changes have been the gradual shift from gas- to battery-powered planes and the establishment of an all but permanent flying field at Round Top Park. “We keep one field as long as we can,” Dan explained. “Compared to other clubs, we are very fortunate to be in this park.”

In 1984, the Club struck a deal with the Athens Township Park Commission and the township supervisors to clear an area at the edge of the park. They initially felled trees, brought in a bulldozer to flatten the field, and planted grass to establish a 200-by-75-foot runway, which was just enough room to get started. Over the years, they have cleared more of the hilltop to enlarge the runway and make room for a pavilion and an adequate parking area. The park commission has provided them with outhouses over the years, including a new, solar-powered unit.

“We are part of the park,” said Dan, noting that the Club has an open-ended lease. “As long as we don’t break any of the park rules, we can stay here. We only have to maintain the grounds.”

The Club garnered new attention and fans in 2019 when the Bradford County Commissioners and the Endless Mountains Heritage Region teamed up for the Bradford County Summer Parks Series. Widely advertised events like that can draw flyers and their fans from across the United States and Canada, Dan noted.

Round Top Park is not their only outlet for flying model airplanes, however. Though the pandemic has limited their activities over the past year, members are looking forward to returning to some of their other venues and getting on the road to participate in events sponsored by other R/C model clubs.

Last summer, they were unable to travel to Kingston, Ontario for an annual Father’s Day event that Dan had only missed once since 1977. And, during previous winters, Club members hosted indoor flying sessions at Lynch Elementary School in Athens (below). The school district chose to keep all but students and staff out of their buildings this year due to the pandemic.

The mission of the Valley R/C Model Club remains “to foster, expand and perpetuate the practice of safe R/C modeling and the spirit of good fellowship among all modelers.” It’s that camaraderie that attracted Jack Reilley, a Delaware County resident who has a cabin near Sunfish Pond, and Jim Spencer of Athens. Both had dabbled in the hobby prior to learning about the Valley Club.

Jack met Dan and other Club members several years ago at a craft show. He hadn’t flown a model in nearly 40 years after crashing one badly in a field at Valley Forge Park when he decided, after having a successful inaugural flight with a mentor, that he was ready to go it alone on his second attempt.

“It’s more fun to have other guys around,” Jack said of his renewed interest in the sport. 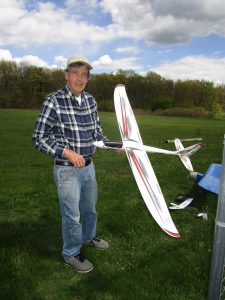 Jim (above) built model airplanes as a kid before they were radio controlled. He started R/C flying with a glider and moved on to model planes for a couple of years before he found out there was a club. Jim’s grandson has shown some interest in model flying but seems to have taken a greater liking to getting himself into the air, obtaining a license to fly full size gliders in the Horseheads, NY, area.

Dan’s membership in the club and that of a half dozen other boys was all but assured, as they’d attended flying dates with their father’s, uncles and older brothers for years. “In the model airplane hobby, it’s not unusual to have other family members involved,” Dan explained, noting that his brother, Dave, and son, Steve, are also in the Club.

All of the active charter Valley R/C members have passed away, except for Bill Cowles, Sr. Though he resides in a senior facility, activity directors and family members still bring him out to flying events when they are able.

Jim voiced concerns that membership could decline if more young people don’t take an interest in the sport, suggesting that there are many more hobby options for today’s youths than when he and his fellow club members got started.

Daniel is more hopeful, noting that he is seeing a wider range in age among members of other clubs. “I think that drones are going to get more people into it,” he stated. “Hopefully, they will then want try flying planes.”

There are in fact two junior members of the Valley R/C Club, children of long-time member Jim Champion. Membership is also not limited to men. According to Dan, other clubs have female members, and he and his fellow Valley R/C members welcome their interest and involvement.

In addition to Jack serving as vice president and field manager, Dan as secretary/treasurer, and Jim as webmaster, Paul Buckthal is the Club’s current president. In the past, Dan has served as president, vice president, and newsletter publisher.

At press time, Club members were hoping to be able to announce some public summer events, including a one day Fly-In Airshow in late July, if COVID restrictions were eased as planned on Memorial Day.

To get a better idea what the Club is all about, interested readers are invited to the Round Top Park Airfield on Wednesday evenings and Sunday afternoons, weather permitting. Additional details, including announcements of upcoming activities, can be found online at www.valleyrcpa.com, or by emailing Dan at pafflyer23@gmail.com. 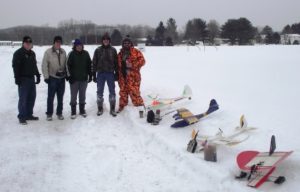 The hardiest of Valley R/C Model Club members continue to send their planes up during winter months from the Valley Soccer Fields. 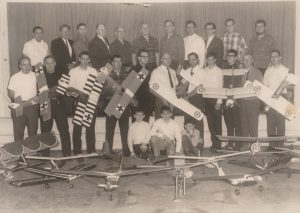