Refinancing Will Provide County With Funds for Other Needs 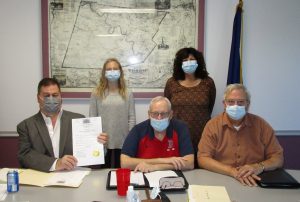 The Wyoming County Commissioners proposed and unanimously passed an ordinance on Oct. 12 that will help them consolidate two bond issues into a single, new bank loan. The refinancing will reduce a substantial amount of oversight required of the previous accounts, about $500,000 annually in debt services, and a considerable amount of interest. The deal was finalized for the county by Brian Koscelansky of Stevens & Lee, with whom the county has done business for a number of years.

The bonds issued in 2015 to carry the county’s debt total of about $8 million and have interest rates near 4 percent. According to the commissioners, People’s Security Bank & Trust Company approached them with the proposal and will manage the funds at a new interest rate of 1.85 percent. “They’ve been a very good partner to the county in many ways,” commissioner Ernie King said of the financial institution.

The change will make approximately $3 million dollars available to the county, $1 million of which will help shore up the county’s pension fund. “The pension fund is in much better shape than it was two years ago,” said commissioner chair Rick Wilbur, citing a strong market and a change in the company handling the pension fund. “We are now on very solid footing, being more than 80 percent funded, which is the state minimum.”

The commissioners noted that the other $2 million dollars has tentatively been earmarked for two new projects, the details of which they promised to share as the initiatives become more structured. The county will also not immediately reap the full benefits of the ordinance, as only one of the bonds is currently callable. The other will be refinanced until it can be redeemed.

In their Commissioners Report, participation in meetings with other entities was outlined, and comments were shared about ongoing efforts within the county. Those given the most attention include Rep. Karen Boback’s recent drive-through Senior Expo, the Lake Carey Welfare Association closing in on sewer and water plans, the Wyoming County Airport Authority’s desire to attract more business flights, and the Tunkhannock Borough Municipal Authority’s dilemma of storm runoff mixing with sewage.

To the latter, commissioner Tom Henry explained that storm water and waste water have long been funneled together into the Authority’s sewage treatment plant. “That’s an added expense with more wear and tear on the equipment,” he related. Milne’s Companies are working with TBMA officials to find the best way to separate the flow.

Rep. Boback’s annual Senior Expo was for years a popular event held at Tunkhannock High School where seniors could walk the lobby and main halls, visiting representatives from numerous businesses and organizations that provide specific information and services for the elder population. It was canceled outright last year due to the pandemic and conducted this year as a drive-through event at Triton Hose Company in Tunkhannock. More than 200 people from Wyoming County and beyond participated.

A recent meeting of the Lake Carey Welfare Association addressed both the dam and impending sewer installations. What Commissioner King described as “minor contractual changes” included 20 amendments to the original plans, but King feels confident that work on the project – many years in the making – will begin shortly.

The Wyoming County Airport Authority met with the commissioners to express their interest in attracting more business clients to what has historically been an airport for hobbiests. “We have a lot of studying to do to help them out,” said Commissioner Wilbur, noting that grants would be required to extend the runway.

The commissioners congratulated Tunkhannock High School freshman golfer Hallie Brown for her recent pre-district and district wins and wished her luck when she goes to York next Monday for the state 2AA Championship. Golf coach Barb Sick noted that Halley had already beaten last year’s #3 state champion and is already on the right pathway for a state title. Hallie is the first District 2 girls golf champion since THS joined District 2 in 1982. 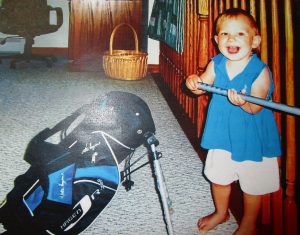 Hallie’s grandparents Carol and county chief clerk Bill Gaylord were in attendance, and Hallie’s mother, Marcy, participated via Zoom. Bill, himself an avid golfer, held up a photo of a very young Hallie (above) with a golf club and bag and said that she was destined to be a champion golfer. Sick noted that Hallie’s success is especially impressive due to both her relative age and stature. Most of older and taller.

Tunkhannock Business & Professional Women officers, Mary Tempest, Elaine Walker and Erica Rogler were on hand for the reading of a proclamation marking Oct. 17 to 23 as National Women’s Week. Walker thanked the commissioners for their continued support of women in management and in the general workforce.

Commissioner King participated in a stalking awareness program. While he acknowledged that stalking is not a comfortable subject to address, the meeting “was well-done and informative.”

Commissioner Henry reported that natural gas hook-up for county buildings is still tentatively planned to be completed prior to the end of this year. Lance Stange has been negotiating final agreements with UGI on behalf of both the county and the Tunkhannock School District.

Commissioner Wilbur has been appointed to the board at Keystone College, of which he is a proud alumnus.

The commissioners and members of the county judicial system have been meeting with various organizations that provide vocational re-entry services to help former inmates of the county correctional facility better assimilate to life after prison. They have previously reviewed the Pike County Reentry Program and met with representatives from Cross Trade and will meet with PathStone before the end of the week. The idea, King related, is to provide outbound inmates with a skill that will lead them to gainful employment and a place in society.