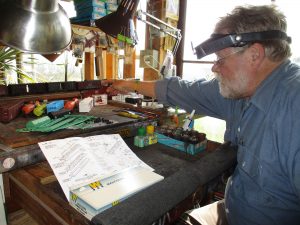 Bob Frey (above) spends many hours a day building and weathering model rail cars in his greenhouse-turned-workshop. A hand-weathered stock car (top), complete with straw bedding and fake pig poop, is ready to ship to singer Rod Stewart.

Bob Frey of Rome Township has worked a wide variety of jobs in his lifetime and served for four years with the Navy Surface Warfare Special Forces Team. But it was his involvement with railroading that brought him to his “retirement” job of constructing custom HO-scale railroad cars that are so realistic that photos of them have drawn skepticism. Bob has no time for doubters, as his labor of love takes up more than 40 hours per week. 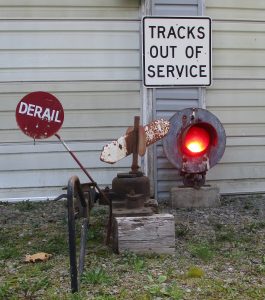 Additionally, Bob has amassed an interesting collection of full-size railroad memorabilia that adorns his yard and landscape beds. The pieces don’t just look good. Most of them are functional due to Bob’s first-hand experience in the rail yards and as a professional welder and electrician. And the bucolic scenery of Rome Township has become the backdrop for Centerpiece Rolling Stock (CRS), the business that he runs with his wife, Mary.

“Rolling stock” refers to everything except locomotives that moves on the rails, and Bob’s exquisite models are considered the “centerpiece” of each purchaser’s railroad display. “These are adult train cars,” he explained. “They aren’t for kids.” Averaging $100 to $500 each, it’s easy to understand why they don’t often fall into the hands of children.

Bob was born and raised in upstate New York and, like many kids his age, he loved putting together models from kits, especially trains. His grandfather, David M. Williams, worked for the Lehigh Valley Railroad (LVRR) from 1926 to 1974, starting his job on Christmas day. So, when Bob got the opportunity to work with his grandfather during his summers off from school, it was a dream come true. Bob continued with the LVRR until he was drafted in 1971.

When he completed his service, Bob went to work for Amtrak out of Philadelphia as a welder on a track gang on the Northeast Corridor, living in boxcars five or six days per week. “That only lasted a few months,” Bob recalled. “I had been gone for four years in the military, and here I was gone again. I missed all the fun of the early ’70s.”

After farming for several years in Montgomery County, Bob moved to the Endless Mountains 30 years ago with three children and their mother. He’d become fond of the area through visits with friends in Meshoppen and Sweet Valley. He sold motorcycles as a Honda dealer and used cars in Wyalusing at Williams Chevrolet. He also had to take some time off due to a serious back injury and subsequent surgeries.

Seventeen years ago, he wed Mary Krudup, whose family had a farm very near where they currently reside on property that had long been associated with the Vought and Young families. “She’s all about railroading too,” Bob said of Mary. “We’re best friends.”

Mary runs the current business from a building a few yards from the shop, which used to be a greenhouse and that Bob calls “Santa’s workshop for trains.” He also refers to it as their third “family room.” They often retire there after dinner, and Bob gets back to his train cars.

Bob’s next railroad gig was on the Towanda Monroeton Shippers Lifeline from 2006 to 2009, until owner Joe Zadrusky sold it to the Reading & Northern Railroad. Bob and Mary also started CRS in 2006 after fellow modelers convinced Bob that his train cars were good enough to be sold on eBay. His skills have continuously improved. Looking back on photos of his earlier pieces, Bob terms them “almost laughable.”

Subsequently, Bob volunteered at Steamtown in Scranton 2009 to 2018, driving there from Rome four days a week. He became a Qualified Train Server in 2011, which included the skill sets of conductor, brakeman and fireman. Mary became the official Phoebe Snow at Steamtown when it became part of the National Park Service. The original Phoebe was a Delaware, Lackawanna and Western Railroad marketing icon created to promote the cleanliness of passenger cars pulled by locomotives fueled by anthracite coal. Since 2018, the two have appeared together in costume several times at Bridge Day in Nicholson. 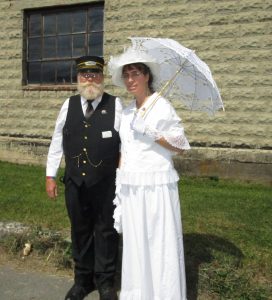 Throughout it all, Bob has continued with both model building and expanding his railroad ephemera collection. Objects on his property include an original Private Road Crossing sign from the LVRR, a whistle post that is also unique to the company, a main line light signal, and a reconstructed, functional telegraph pole with a phone box at the base.

Bob purchased some pieces purchased. Some were given to him. And some he salvaged piece-meal. His experience gave him a good eye for recognizing what parts belonged together as whole pieces. “All of this is just historical trash,” Bob remarked. “Most of it hasn’t been used since the 1960s.” 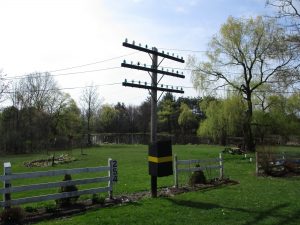 He searched for years for the parts to complete the telegraph pole and the main line signal, which are operational via wires run to the house. Before opening the phone box to display its contents, Bob said, “The old timers always used to tell me ‘You’d better have a can of wasp spray when you go to use the phone.’” Sure enough, an empty wasp nest clung to the interior wall.

Bob and Mary conducted nature walks on their property for visiting private school students for a number of years and are considering hosting “railroad history” events. But Bob’s primary focus is his hand-weathered model railroad cars, as he meticulously works his way through 5,000 model kits from the 1950s and ’60s. At a pace of nine completed cars per month and 2,300 boxes left to go, Bob jokes that he should be finished when he’s 85. 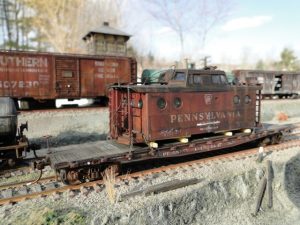 Through eBay and the website www.centerpiecerollingstock.com, Bob’s work has caught the attention of model railroad enthusiasts worldwide, including singer Rod Stewart, whose 126-by-23-foot detailed diorama has been featured in railroading magazines, network news programs, and on YouTube. In late April, Bob was working on seven cars simultaneously for Stewart, who had already purchased many cars from Bob this year.

There are about 55 pieces per kit, which Bob oxidizes and weathers prior to construction and then again afterwards. The finished rail cars are then photographed prior to sale. If weather permits, Bob takes them to a raised piece of track at the edge of his yard that can be turned to best utilize the sun and add to their authentic look. If it’s stormy, he has an indoor diorama that he can use. Either way, the finished cars look convincingly real, always representing northeastern U.S. railroad companies.

“Bent up and beat up,” Bob said of the exterior details. “This is what they really look like.” Over the years, he has experimented with the formula of traditional model paints, and calls what he applies to the cars as “special sauce.” 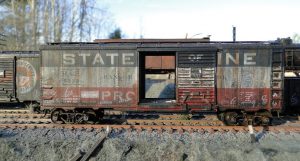 But the authenticity doesn’t end with the outside. Bob adds wooden floors and walls to the freight cars, as well as “dumage,” a term that describes debris routinely left behind in a car like straw, packing materials, and animal feces. “It’s not the railroad company’s job to clean the cars,” he explained. “It’s the shipper’s job.” Coal cars contain ground up creosote from Bob’s chimney that looks and smells like real coal. Then the photo magic begins.

“eBay flagged me early on and asked why I was using photos of real railroad cars to sell my models,” said Bob. Stewart’s handler (manager) told Bob that Stewart’s wife came upon Rod looking at Bob’s photos and ask him pretty much the same thing.

Bob has a large train layout in the basement of his house from which he admits he has more or less walked away. “It’s abandoned because I sit here and do this all day,” he stated, citing the ambient brightness of the studio and a view that, on a clear day, extends almost to Wyalusing Rocks. Deer, chipmunks, and a wide variety of birds, including great-horned owls are among the real visitors to his fascinating imaginary world. 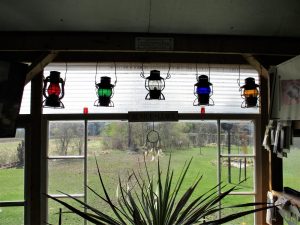 Authentic rail yard lamps glow in the natural light that makes Frey’s workshop a delightful space in which he can work or relax. 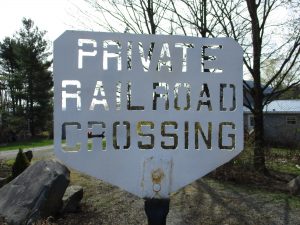