The courthouse at Tunkhannock and other Wyoming County office buildings will be open to visitors by appointment only as of Dec. 9. The decision came late on Dec. 7 in response to an uptick in positive COVID tests and cases.

Story and above photo by Rick Hiduk/Map by Google Maps

The Wyoming County Commissioners on Tuesday addressed concerns and communications about the silica transfer plant and new railroad tracks installed to support the business. Most importantly, commissioner chair Rick Wilbur stated, county employees will not respond to any questions or comments posted on their personal social media sites, sent to their personal emails, or via their personal phone numbers.

“The commissioners are concerned and working on a solution to the construction of a rail siding next to Batron’s and the bypass. Our planning office and solicitor are researching the legalities to see if the commissioners and/or the township can do anything about this,” Wilbur read from a prepared statement. “Please understand that contact with the commissioners concerning this issue and others must be made through county email and not personal emails and Facebook.” The commissioners’ email addresses and office phone number are listed at the county’s website www.wycopa.org under the commissioners tab.

Because the construction has become a legal issue, Wilbur continued, he and the other commissioners are not willing to risk having their phones nor personal data sequestered or subpoenaed because they used them for official matters.

In addition to concerns addressed by citizens about the potential of airborne silica – a fine sand used during the hydraulic fracturing process of natural gas drilling – being a carcinogen, the commissioners are equally worried about the traffic problems that could result from tankers moving in and out of the plant via Route 92 opposite Dunkin’ Donuts and Lane Hill Road. 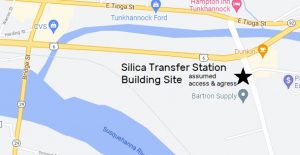 As there is no gas activity down river, Wilbur added, all exiting trucks would obviously be turning left (north). “How many trucks can you put between there and the traffic light? One?”

Commissioner Tom Henry confirmed that NE Marcellus – the company building the facility – does not have permits for construction.

County Business to Return to “Appointment Only”

Due to a surge in local coronavirus cases, the commissioners voted unanimously this afternoon to restrict visitation to the courthouse and other county offices as of Thursday morning, Dec. 9, until further notice. The matter was brought up in the morning during the public meeting, but Wilbur said that he wanted to talk with department heads first to get their input. “I can’t imagine that any of them will be against it,” he stated.

All business to be done with county departments must be arranged in advance. Contact information for all county offices can be found at www.wycopa.org. The only exception are the courts, which are under the jurisdiction of judge Russell Shurtleff, who has been using virtual online platforms whenever possible during the course of the pandemic.

We found previously that we can get the job done even with limited live contact, and I’m sure that we can do it again,” Wilbur wrote in an email to the media. Many applications can be acquired and approved via email, he noted. Masks must be worn during all visits.

Readers who would like to preview Wyoming County’s proposed 2022 budget before it is approved on Dec. 30 can log onto the county’s website to view the document. Revenue and expenditures are balanced at $16,788,975 for the new year, and there will be no increase in taxes.

According to commissioner Wilbur, an increase in health insurance costs by about 14.3 percent was offset by the restructuring earlier this year of two long-term bonds into loans now held by Peoples Security Bank. By reducing the service debt from 4 or more percent to less than 2.5 percent, the county will save about $200,000 per year.

Additionally, Henry noted, some county employees were not replaced when they resigned or retired, resulting in additional savings.

On a related topic, the union representing the county’s prison employees agreed to the same modest pay increases that other county employees had already accepted. A 25 cent per hour across the board paycheck increase – $455 annually for each of the county’s 160 employees – will be augmented with two COVID-relief hazard pay installments of $1,000 each in January and July 2022.

For nearly a decade, the county commissioners have been looking for the day that the county courthouse and correctional facility would be switched over to natural gas, putting their support and faith behind UGI to bring the service to them and the rest of Tunkhannock borough. Various elements, including harsh weather and the pandemic, have slowed the project from time to time.

But the current hurdle is related to an agreement by a once reluctant Tunkhannock School District to also hook into the system. Now that they are on board and the total cost for the project has exceeded earlier expectations, the contracts between the county, the school district and UGI have stalled.

“We’re getting a lot of kickback from UGI on hook-up fees that they were originally not going to charge us,” Henry remarked. Negotiation for the county is being handled by Mike Bayesa of Energy Systems Group.

For many years, the Sheriff’s Department has assumed the responsibility for security at county offices, and it was assumed by the commissioners that the arrangement was status quo. Sheriff Bob Roberts recently brought it to the board’s attention, however, that a legal document was required to insure that the Sheriff and his staff would maintain order at county buildings, prevent weapons from entering the structures, and have the authority to arrest those who do not comply.

“Some counties use a private firm to handle security,” Roberts related. A new 10-year contract between the county and his department was drafted and ratified on Tuesday. “It’s regulated and it’s uniform, so there are guidelines for a fair application.”

A long legal battle against pharmaceutical companies for damages incurred by counties across Pennsylvania via the careless distribution and promotion of addictive pain killers in the opioids class has finally been settled. The County Commissioners Association of Pennsylvania (CCAP) has stepped in to handle distribution of the funds, which was delayed for some counties that share drug and alcohol services.

Commissioner King spent some time communicating with CCAP representatives on Monday and assured the board, “It’s going to go directly to each county, regardless of joinders.”

Wyoming County is looking at an award of about $1.5 million to be used over 18 years to help local communities fight substance use disorder and offer programs and treatment for the many aspects of opioid addiction.

“Wyoming County won’t have any problem using that money because we definitely have a problem here,” Henry stated.

The county still has approximately $30,000 in Marcellus Legacy funds to distribute to municipalities and nonprofit organizations with eligible recreation projects. Those interested should contact county planner Lynnelle Farber for an application as soon as possible, as the deadline is January 15, 2022.

A vaccination clinic for those eligible for their COVID booster shots will be held on Thursday, Dec. 9 at the Lake Winola Fire substation in West Falls, Exeter Township. Afternoon appointments were still available at press time and can be scheduled by calling the Exeter Township Medical Center at 570-740-4117.

The Blue Star Mothers of NEPA will host a presentation for military veterans buried in Sunnyside Cemetery at the east end of Tunkhannock on Saturday, Dec. 18 at noon as part of the Wreaths Across America project. “For those who have never attended, it’s always a very nice ceremony,” said Henry.

Christmas cards donated by the Tunkhannock United Methodist Church were donated to the Wyoming County Correctional Facility for inmates to share with their families during the holidays. Wyoming County CARES donated the postage, and commissioners’ administrative assistants Lori Gaydos and Linda Stackhouse coordinated the effort.