Prisoner Transport Van in Service – New Boilers, Not So Much 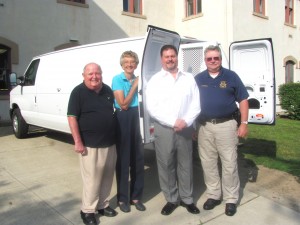 Despite the persistent optimism of both Warden Ken Repsher and the Wyoming County Commissioners at monthly Prison Board meetings, the completion of installation of new water heaters at the Wyoming County Prison in Tunkhannock remains delayed.

“The water heater’s are in but not online,” Repsher told members of the Wyoming County Prison Board this morning. The new system has been plumbed, he noted, but a fuel line needs to be changed to allow for easier conversion from propane to natural gas should the opportunity to use natural gas arise.

Repsher was unsure when the project, which has dragged on for seven months, would be completed. He added that the fuel line fix would require a six-hour shutdown of the current system, which was not predicted to be a major interruption.

A long-awaited transport van that will shuttle inmates from county to county as needed and between the jail and courthouse when conditions warrant was put into service Tuesday morning.

Commissioner Tom Henry drove the van after it arrived on Monday and was pleased with the interior work done to modify the vehicle for its specialized service. He described the steel insert as a secure cage with only one way in and out.

“I think it’s going to be a big help to the sheriff and the jail,” Henry stated. The cost of the 2014 Ford F350 Cargo Van was split between the sheriff’s office and the prison as part of the respective departments’ 2014 general budgets.

As of Tuesday morning’s meeting, Sheriff Ned Sherman had yet to see the van, having been off on Monday. He got his first look at the vehiclein the afternoon after it was returned from Camp Hill, where seven prisoners had been transported this morning.

Henry related that the van is equipped with lights and sirens and that he could imagine eight inmates being transported comfortably. Sherman (below) noted that the insert is actually designed to carry a maximum of 12 prisoners. 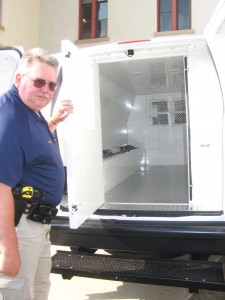 Previously, the county had to rent vehicles for transport, and four to six staff members were needed. Only two officers are required to move inmates in the new van. “We’re going to save money with this,” Henry stated.

In general prison news, population is holding steady with 49 intakes and 51 releases. There are currently no inmates in Wyoming County from other facilities, but the county had paid out $9,165 through May to board prisoners in Lackawanna and Susquehanna Counties.

Drug and alcohol counselors, religious organizations, and GED instructors topped the visitors list to the prison last month, logging more than 500 visitor hours for the 48 men and 13 women currently housed at the facility in Tunkhannock.