Prison Population Down, and It Could Be Lower – Work Release Addressed 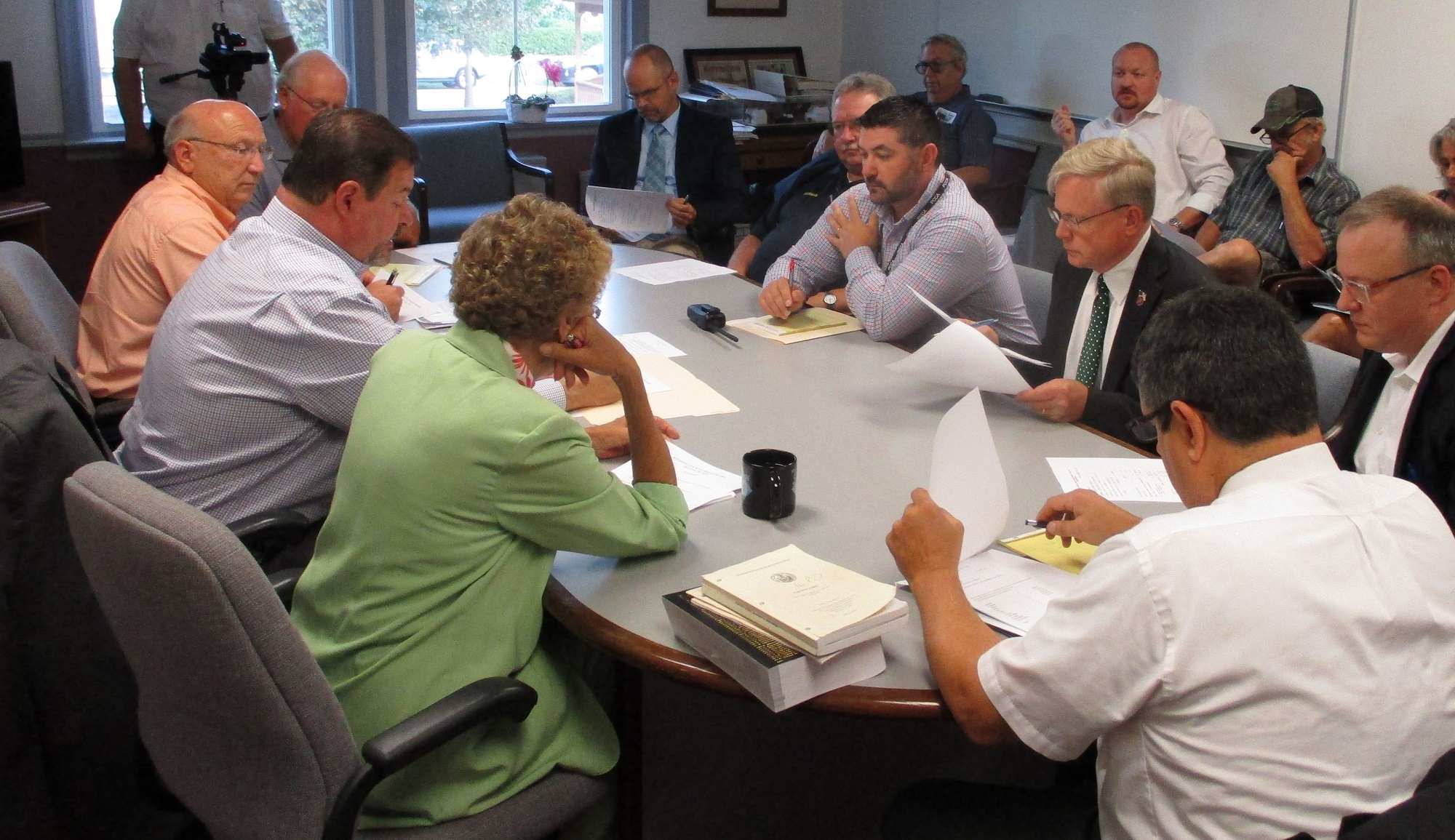 The number of inmates in the prison system in Wyoming County is at it’s lowest level in years. Of 54 male and 17 female inmates reported by deputy warden Gordon Traveny at the monthly meeting of the Wyoming County Prison Board on Tuesday, only two are now boarded out – one each in Susquehanna and Lackawanna counties.

That’s great news for a county that has been saddled with the high cost of outsourcing, estimated at $70 per day per prisoner. The cost to the county already this year is about $56,000. But information presented by the county’s public defender during both the Prison Board and regular Commissioners meetings on Aug. 20 suggests that there would be no outsourcing if measures commonly employed in counties adjacent to Wyoming County were embraced here.

Atty. Timothy Michaels, who has served the county as public defender for the past 14 months, first spoke up during the Prison Board meeting, posing questions about the county’s work release policies. The requirements for work release are not readily available, and he believes that many of the clients whom he represents might be eligible.

“There may be some confusion as to what the regulations are,” Michaels suggested. “I don’t know when to tell my clients to apply or not to apply.”

Traveny, who was sitting in for warden Ken Repsher, was under the impression that the Probation Department oversees work release, but Michaels countered that work release is technically a duty of the warden. “The warden would work with the other departments to run the work release program, but he is the ultimate boss as to whether a person gets released or not.” Michaels noted, adding that other counties post the criteria online, as well as programs available for “after care.”

Helping prisoners maintain employment while they serve out their sentences prevents them from being evicted from their places of residence and decreases the chances that they will return to prison after being released – a statistic known as recidivism. In addition to the stigma individuals face for being imprisoned, their landlords can easily find a new tenant who can pay the rent on time and often do not hesitate to discard the belongings of those in jail. Many are released to a virtual vacuum, with nothing but the clothes on their backs to start life anew.

The consequences seemed obvious to the commissioners, who are part of the prison board. Responding to the information Michaels offered, commissioner Mike Stabinsky remarked it sounded like there is room for improvement in the system. “They could remain employed and have a better chance at getting housing,” he said, in reference to low-level offenders with relatively short prison terms.

Michaels made a motion that Warden Ken Repsher be asked to make available the criteria for work release to attorneys and that he be given the authority to oversee the program. The board approved the motion unanimously, contingent on the solicitor’s approval of the proposed document.

As the Prison Board meeting adjourned and the regular public commissioners meeting got underway, Michaels remained and eventually asked if he might give a report on his first 14 months in the position of public defender. Michaels is not one to seek the spotlight, so his request was uncommon but welcomed by the commissioners, who invited him to the table.

Since the early summer of 2018, Michaels and his assistant, Atty. Travis Eckersley, have handled more than 400 cases for the county. Upwards of 80 percent of people arrested are eligible for a public defender, and 90 percent of those individuals take advantage of the service.

“It’s very difficult to juggle all the cases. Four hundred is a struggle for any department,” Michaels related. “We handle some of the most serious crimes in the county.” There are currently about 220 active cases and an equal number of individuals on probation or parole. The Probation Department, Michaels maintained, also has its hands full.

Nonetheless, Michaels explained, there have been big improvements in the system over the past year. “The vast majority of clients reach sentencing in better time,” he noted. Whereas the average lapse between an arrest and sentencing was 220 days when Michaels assumed the role of public defender, that time has been reduced to 70 to 90 days.

“I believe that people can move more quickly,” he suggested. “But that is not in my wheel house.”

Michaels was reticent to take too much credit for the shorter time span, but he feels that a number of changes made at his end of the judicial machine helped to make the process more efficient. “I’m always thinking of ways to make it better,” he stated.

In an effort to both save the county money and to prevent individuals from spending unnecessary time behind bars, Michaels related, his focus shifted to those already in jail awaiting hearings and sentencing. “There is a decrease in the jail population because of that,” he maintained.

To a similar end, Michaels addressed how a person initially accused of a crime is processed in Wyoming County compared to other counties. An arrested individual is supposed to be brought before a magisterial district judge within 10 business days. Instead, the date of the preliminary hearing is often more than two weeks away from the filing of the police report at the magistrate’s office.

(Editor’s note – as someone who works with magistrate reports on a regular basis, I can attest that the scheduling of preliminary hearings is often at least a month after the filing.)

After the date with the magistrate, which can be waived, the defendant is supposed to be scheduled for an arraignment within 25 days. Since both arraignments and sentencings in Wyoming County occur only once per month, the arraignment date can be put off as far as two months, “depending on how it falls on the calendar.”

Then, despite the relative simplicity of so many of the cases, Michaels continued, “We often do not have the ability to do an arraignment and a sentencing the same day.” Therefore, despite Michaels’ best efforts, defendants often are not even sentenced for as long as 90 more days.

“That really drags it out,” commissioner Judy Mead commented.

Magistrates Can Do More

Since president judge Russell Shurtleff took over the court 10 years ago, Michael explained, 76 percent of the cases coming into the courthouse have been misdemeanors. One third of those, Michaels asserted, could have been resolved at the magistrate level as they are in other counties. “It’s the first line of defense to save the county money,” said Michaels.

Chief clerk Bill Gaylord asked why this is not happening in Wyoming County.

“I was told that probation does not work with the magistrate. They will not oversee the defendant, and it’s costing us more money,” Michaels replied.

Of the cases sent to the courthouse that could have been handled in the district magistrate offices, Michaels estimates that 15 to 20 percent of the individuals involved were put in jail while waiting on the judicial system.

Further citing state statistics, Michaels said that most people who are arrested for breaking a probation or parole violation have broken a rule – not a law. “Seventy-six percent are re-incarcerated for not calling in or driving a vehicle when they are not supposed to,” he cited as examples.

“In that time, they can lose their jobs and everything else,” Mead pointed out.

Adding insult to injury, Michaels noted, a number of the defendants end up receiving minimal sentencing that is less than the time they have been already sitting in a prison cell, time and a disruption of their lives that they will never recouperate.

Michaels fielded some questions from audience member Lori Faux as to what more might be done to properly handle the intake of prisoners with mental illnesses and intellectual disabilities. She also asked if there existed enough of a need in Wyoming County for a person specifically trained to assess mental illness.

“It would merit at least someone working 20 hours per week,” Michaels responded. “A larger county would have a public defender who is mental-health-certified.”

“It would be nice to have somebody get some of that kind of training,” commissioner Tom Henry interjected. “It can work well.” (Henry represents Wyoming County on the joint Mental Health and Disabilities board with Luzerne County.)

Mead suggested that the recent opening of a Trehab office in Tunkhannock might provide some additional options for both the aforementioned concerns and the “after care” that the county was noted for lacking during the Prison Board meeting.

“It’s really up to the Criminal Justice Advisory Board to draw up the map of where people are and where they are going,” Michaels remarked. “Probation is an inappropriate vehicle for helping people out after they have been released.

In the meantime, the public defender’s office has gone the extra mile by providing a compassionate ear and guidance to defendants after they get out of prison. “We continue with them,” Michaels related in reference to steering individuals to addiction centers and other human services. “We give referrals to former clients even though they are technically not in our care any more.”

Since he came on board as public defender, Michaels has added three additional phone lines in his office, and staff members are routinely dealing with two clients simultaneously. “We do have a more knowledgeable client base,” he stated.

“It has been less stressful for us commissioners since you took over,” Henry told Michaels.

It was apparent to many in attendance at these two meetings, however, that the wheels of justice in Wyoming County are turning uncommonly slowly.

The following were approved by the Prison Board as part-time corrections officers for the facility in Tunkhannock: Catherine LoBuono, Kurt Steele, and Amber Collet.

The Wyoming County Prison Board will meet again in the commissioners board room of the Wyoming County Courthouse in Tunkhannock at 9 am on Tuesday, Sept. 17, and the public is permitted to attend.

(Editor’s note – I have corroborated Atty. Michaels’ remarks with an established attorney in an adjacent county who has significant experience working clients through the Wyoming County judicial system. In fact, this individual alerted me to most of Michaels’ expressed concerns some months ago. Their synopses parallel each other’s, despite coming from differing perspectives.)