In: Dushore
With: 0 Comments 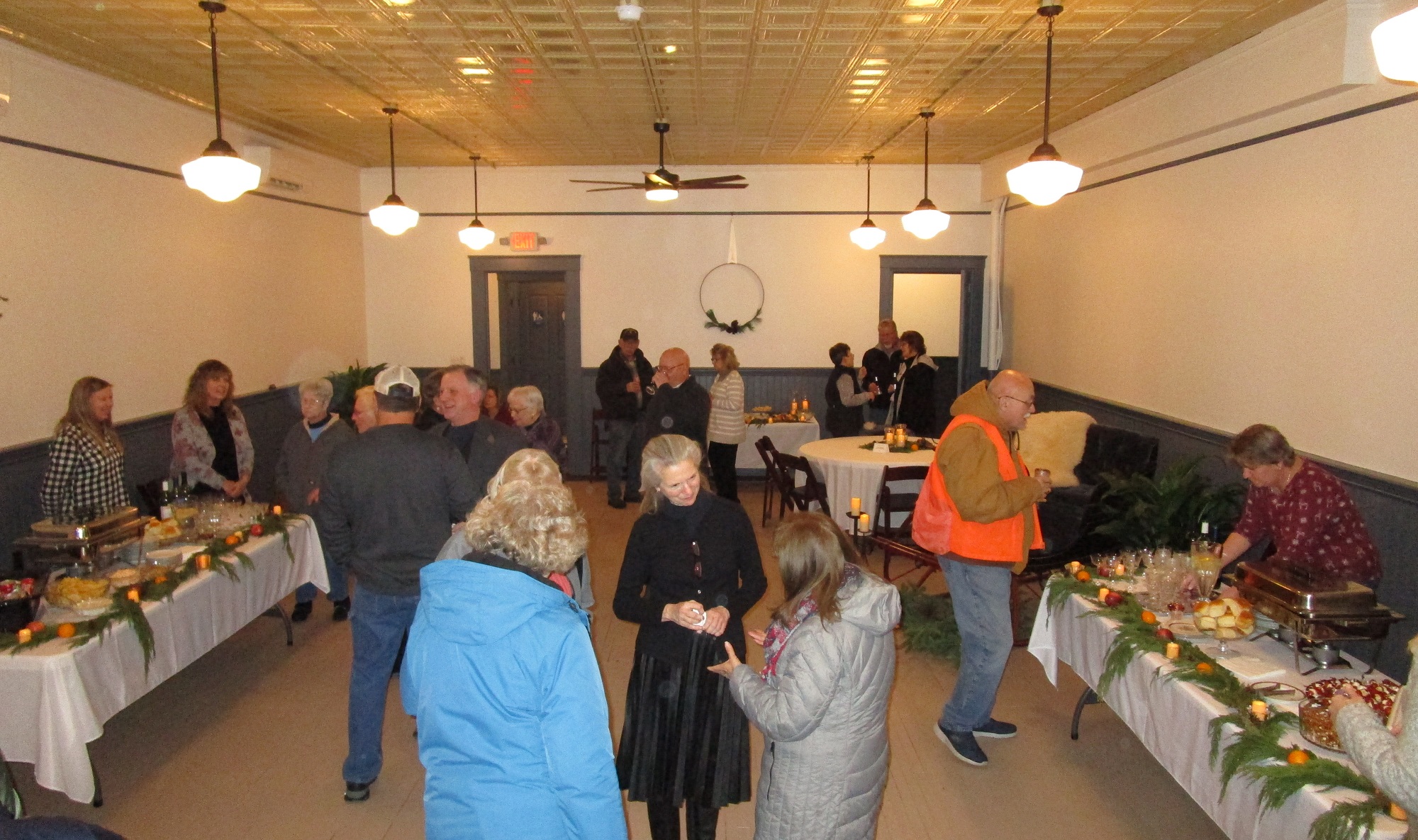 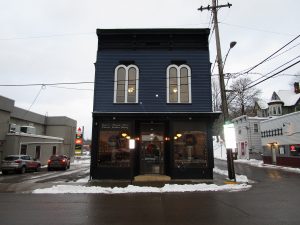 Pealer Hall owner Patty Lane (top, center, in black dress) fields questions from guests of an open house event held at the newly restored facility on Dec. 5. Pealer Hall on East Main Street in Dushore will soon be available for rental for dinners, parties and meetings, as will two refurbished apartments on the second floor.

A centuries old Dushore building that has served since 1852 as a drug store, a pet shop, an appliance center and a clothier is headed in a new direction now after an extensive renovation. Pealer Hall at 109 East Main Street has been retooled as a public gathering space. There are also two modern apartments overlooking downtown Dushore from the second floor.

Despite its many uses, the building exudes a classic look with modern conveniences, including ADA-compliant restrooms. Some original features that were saved include the ornate tin ceiling on the first floor, and the two double-arched windows on the second floor. All of the windows have been fitted with thermal glass.

“It’s certainly not the oldest building in town, but it’s one of the only buildings in Dushore that looks old,” said Patty Lane, the new owner and driving force behind its restoration. Her father, Jerry Lane, grew up in Dushore, and her family’s roots in Sullivan County predate the structure. Though Patty grew up in Philadelphia and Cincinnati and lived in New York City for a number of years, she noted, “Dushore always felt more like home than anyplace else I ever lived.”

Members of the Dushore Area Business Association (DABA) and the Sullivan County Chamber of Commerce (SCCC) were among the guests at a “soft opening” held on Dec. 5. Guests enjoyed hors d’oeurves and sipped wine and beer as they admired the meticulous renovations and shared their memories of the businesses that preceded it.

“They used to mix the drugs by hand,” said Bill Bohenski of his recollection of the drug store when it was run by Bob Diltz, the second owner. Pealer Hall gets its name from Pealer’s Drug Store, the first inhabitant.

Bohenski is a long-time business owner who helped to found DABA in 1983 after several blocks of downtown burned to the ground that January. “Back then, everybody from Dushore, Mildred and Lopez knew each other,” he remarked. “You could come to Dushore and get everything you needed. Now people just hop in their cars and drive away.”

Patty credits DABA members and Dushore mayor and friend MaryBeth Minier for their unflagging moral support as she began to wrap her mind around the project. “I just thought the building deserved to be saved, and I had the time and resources to do it,” said Patty, who retired to Dushore in 2007 after first purchasing a home there in 1991. “Their energy has kept me going.”

While Dushore may never again have as many businesses downtown as it once did, the number of people participating in the open house suggested that the town certainly would support a gathering place. “We were very pleased by the attendance,” said Patty, “especially during hunting season on a cold winter night.”

Bohenski was seated with Harold and Betty Fenton, who ran Fenton’s Clothing store in the building for 25 years through 2017. The Fentons rented the space from Wayne Miller, from whom Patty purchased the structure.

“It’s wonderful. I love it,” Betty said of the big meeting space, which was modestly decked for the holidays with extra touches by Carol Whitaker of Second Hand Rose just for the event. Patty related that Frank Construction Company did most of the work and that Whitaker brought lots of good ideas to the table. “She’s been a good partner and has more ideas for fundraisers we can do,” Patty remarked.

“I think it will be a very nice place to gather,” SCCC managing director Candy Williams stated.

“And the Chamber will support her wholeheartedly,” added SCCC secretary Carol Ferrell.

“It’s amazing what she has been able to do and the changes that have been made,” Melanie Norton of the Sullivan County Historical Society said of Patty’s progress. “It looks much larger now for the functions that she hopes to have here.”

Patty estimates that the meeting space can comfortably accommodate 60 people. There is a small kitchen at the rear of the building from which caterers can do their work. When the lines on the parking along the building’s left side are painted, there will be two handicap-accessible spots next to the ramp that leads to a side entrance. There is some additional exterior work to do, but the bulk of the interior is finished, including the two one-bedroom apartments.

“That may be the biggest improvement,” Betty said of the upstairs living space after taking a peek.

Patty explained that the apartments are ready for inhabitants and should be listed on Zillow.com before the end of the year. She expects to begin renting Pealer Hall’s meeting room after the first of the year for parties and dinners. “I want paying events to cover the operating expenses,” Patty commented. “I hope that it will also be used by non-profits for their gatherings.” Prices range from $75 for three hours to $250 for a full day and special rates for non-profit organizations.

In the time that she has lived in Dushore and during the course of the renovation, Patty has come to know numerous decorators, florists, and caters and will list them as resources on her website www.pealerhall.com, which will go live shortly. In the meantime, interested readers can follow Pealer Hall on Facebook for updates or contact Patty Lane at 570-928-9437 for more information. 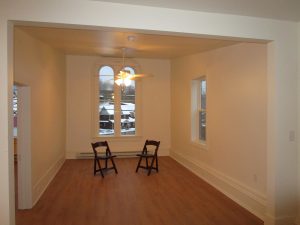 One of two renovated apartments in the Pealer Hall building features a pair of double-arched windows that overlook Main Street. 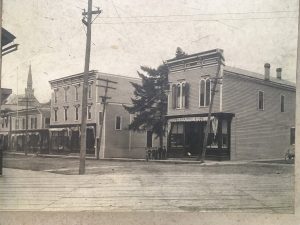 A photo supplied by the Sullivan County Historical Society shows how Pealer’s Drug Store fit into the townscape of Dushore about 100 years ago. The spire of St. Basil’s Church can be seen at far left.