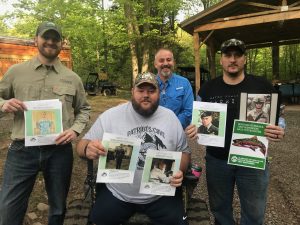 Seven teams of veterans and corporate sponsors prepare to embark on a day of fun and fishing at Patriots Cove in 2019 (top). The big winner at the last year’s Fish for the Fallen tournament was (seated) Dennis Lenard of Harrisburg, congratulated here by (standing, from left) guide and mentor John Pittenger. Patriots Cove founder Jeff Swire and fishing partner Mike Yanridge.

Patriots Cove in Noxen Township, Wyoming County, has come a long way in its first four years of operation. Founded by 24-year army veteran Jeff Swire and his wife Melissa to provide recreational opportunities for veterans and first responders whose service resulted in physical or emotional disabilities, Patriots Cove now offers fishing and other nature-based activities throughout the year.

On Friday, May 29, anglers from local businesses and “wounded warriors” from across the country will gather in teams for the second annual Fish for the Fallen Tournament and fundraiser. All proceeds from the tournament will support 2020 operations, activities, and events for injured veterans, first responders, and their caregivers.

Swire grew up in Noxen and purchased the 18 acres of forest and stream that became Patriots Cove. Meandering among the pines and boulders was a sickly stream called Beaver Run. Surprisingly, it contained some native trout, but there were also high levels of phosphorous, low levels of oxygen, and two abandoned septic systems that were leaching into the stream.

Swire worked with conservationists and the PA Department of Environmental Protection to clean up Beaver Run and install waterfalls and other water features to increase aeration. The results were immediate and, within months, the stream was healthy enough to stock with new trout.

A lodge was built at the center of the property as a meeting place for both veterans and volunteers. The first large-scale fishing event was held in conjunction with the opening of trout season in 2018. Docks, wooden pathways, and other structures continue to be added.

This is the second year for the Fish for the Fallen Tournament, which pairs veterans and first responders with a sponsor and a professional fishing guide. Each team also competes in memory of a veteran or first responder who made the ultimate sacrifice, carrying a photo and biography of that person throughout the event. 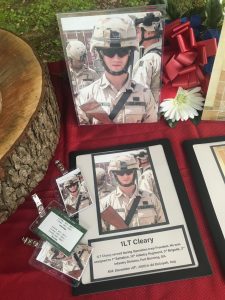 Teams are provided fishing equipment and meals, as well as access to fish Patriots Cove’s mile-long trout stream. The costs are covered by corporate sponsors, representatives of which are also often veterans or first responders. The event culminates with a memorial service at 4 pm to which the public is invited.

Remaining proceeds are earmarked for operations and events that assist with Patriot Cove’s mission. Last year’s sponsors included Cabot Oil and Gas Corporation, Williams Companies, and Quality Collision, Inc. According to Swire, “Their contributions helped Patriots Cove bring veterans from across the nation to participate in fishing retreats and one- and three-day events, empowering injured patriots to get back in the fight.”

Swire returned from Iraq in 2014 after years of assisting in the dismantling of roadside bombs and other tasks. A non-combat injury in 2004 that herniated his neck and spine eventually led to a surgical implant and medical error that resulted in the early stages of sepsis and a need to him to retire.

“I didn’t want to leave, but I was too sick to stay,” he recently told a group of Tunkhannock High School students. “I had fallen into a downward spiral for nearly five years before I could grab onto something to keep me from fading away,” crediting his wife for her unwavering support and great ideas. “Had we not founded and created the Cove, I wouldn’t be here today,” Swire maintains. “I can say that Patriots Cove has saved at least one life, and that is mine.”

“Many wounded warriors face physical, emotional and spiritual struggles,” Swire’s daughter, Katie remarked, “and we hope to promote lasting healing by reconnecting them with nature and empowering them with purpose.”

In addition to the fishing events, Patriots Cove hosts restorative outdoor activities and environmental service projects, as well as educational events and retreats for caregivers. “Our goal is to let them see that they still have value and purpose, despite their injuries,” Swire explains. “We are knowledgeable people who have been put into situations at a very young age and given us lessons that make us valuable to the community, even though we have scratches and dents.”

On May 29, the success of each team will be measured by the length of the fish they catch. Points for native trout are doubled as they tend to be smaller. An initial tally is given at noon before the anglers head back to the water to rack up more points. First- and second-place team members receive hand-crafted fishing rods with the Patriots Cove logo and event information inlaid.

Tournament participants take a few minutes to celebrate their day and to remember the lives of the men and woman on whose behalf they have fished. “It’s our way too make sure that our brothers and sisters are not forgotten,” said Swire. “It’s our commitment as a society to make sure that their sacrifice was not in vain.” The public Memorial Day commemoration follows with a local color guard and trumpeters playing taps.

As of Thursday morning, April 9, Jeff Swire reported that Patriots’ Cove is definitely proceeding with plans to hold the tournament. To participate in Fish for the Fallen 2020, interested readers should contact Swire at 919-971-4619 or via email at patriotscove@gmail.com. 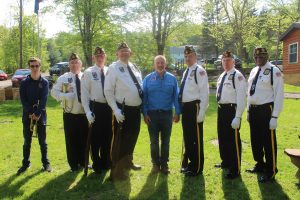 Members of the Dallas American Legion Color Guard participated in the memorial service that concluded the 2019 Fish for the Fallen event. 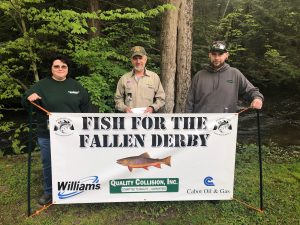 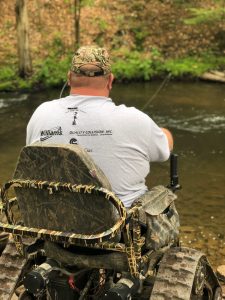 Veteran Dennis Lenard enjoys the calm of Beaver Run as a participant in the first Fish for the Fallen tournament. 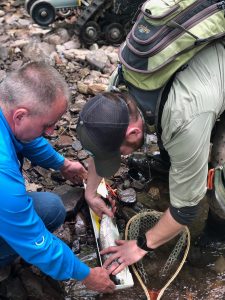 The total inch count of each teams catch determines the winner of the derby.