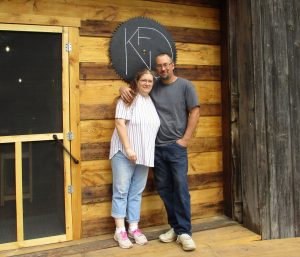 Jenn and Sam Keir (above) are ready to welcome more visitors to their tasting room at the Keir Family Distillery in Warren Center this weekend. The event runs from 2 to 10 p.m. on June 25.

Sam and Jenn Keir never intended to get into the bar business and, technically, they aren’t. But their quaint tasting room in a barn that has been in Sam’s family since the 1930s might be one of the most unique drinking establishments in the county in many years. The hand-hewn wooden bar and bar stools and repurposed items like an old cattle yoke and a pair of snow skis are part of a homey atmosphere that also includes centuries old advertising posters (below) and framed family photos. 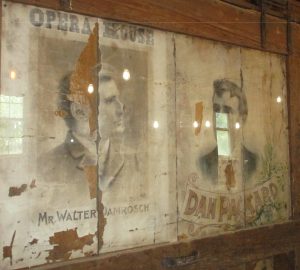 The Keir Family Distillery at 469 Painter Road has become a place where the varying talents of the Keir and Nagy families are on display every day. Like any business, its beginnings were humble as Sam perfected the art of distilling bourbon, whiskey and flavored liqueurs, and Jenn studied the legalities of serving and selling alcohol from their own property.

“We didn’t imagine having a tasting room at the time. Originally, we wanted to put it in stores,” Sam said of the early brainstorming. “But you have to have a place to sell your product.”

They were determined to keep the business on the up and up from the start, so they began applying for their permits through the federal Alcohol and Tobacco Tax Bureau (TTB) in 2021. That allowed them to start making small batches of alcohol, including their signature naturally-flavored liqueurs that they shared with friends at tasting parties.

“Once we got one down that we liked, you have to increase production and get approval from the TTB,” Jenn related. “Then the (state) Liquor Control Board gives approval.” Each separate formula and bottle label also requires approval.

The procedure of distilling is equally complex and takes time, and the Keirs have finally gotten to a point where production is ongoing. “We are still a micro facility,” Jenn explained. “It’s such a long process that it takes a while to get ahead of it.”

Conversion of the barn began in December of last year but progress was steady. When they were ready for a soft opening this spring, word spread quickly that something special was happening on a farm that people had watched evolve for decades.

Sam’s grandparents, Joseph and Mildred Hernandez, came from New York City, where Mildred had been a commercial artist. Family lore has it that Mildred created the iconic Betty Boop cartoon character, but female artists were uncommon and rarely given credit for their work.

The couple bought several farms and merged them into a single business, starting with a variety of fodder, then adding dairy cattle and eventually sheep. “Farmers need to try a lot of different things, and they still don’t make a lot of money,” Sam remarked.

The Hernandezes passed the farm down to their daughter and Sam’s mother Elizabeth, who married Fred Keir. Fred didn’t share Joseph’s passion for farming but loved the land for its bounty of fish and wild game. He was also a farrier, making horseshoes. The family continued to raise cows, sheep, goats and horses as more of a hobby, with Elizabeth thoroughly enjoying maintaining the property, which she considered her piece of heaven on earth. Both have since passed away.

Jenn moved to the area with her parents, Darrell and Gail Nagy, from New Jersey when she was 13. She and Sam met as students of Northeast Bradford High School, from which they graduated in 1997. The two then went on to study nursing at the Northern Tier Career Center and became LPNs. Jenn still works at Guthrie Hospital, but Sam has retired his scrubs to pursue distilling full time.

He refers to the product as wood-fired whiskey, as all of the stills are heated by firewood. In fact, the abundance of firewood, lumber and corn in the area helped to shape the business. The Keirs purchase pre-charred oak barrels for aging of the carefully blended alcohol that results from weeks of mashing, fermenting, grading and distilling. The first batch made in each new barrel is called bourbon. All bourbon is whiskey, but not all whiskeys are bourbon. The science of maintaining specific ABV (alcohol by volume) is strictly controlled by government standards, and bourbon is held to higher standards. The Keirs’ whiskeys and bourbon are 50 percent ABV or 100 proof. The six flavored liqueurs are 24 percent ABV or 48 proof. Currently, the best seller is the Iced Tea liqueur.

The charring of the barrels varies to produce dark, medium, and light roasts, giving the bourbon a naturally woody flavor. Sam doesn’t allow his batches of bourbon to get “super woody,” as he puts it. The Keirs are producing two to four barrels per month, each leading to a little more than 100 bottles. The bottle labels were designed by their daughter, Mikayla. Jennifer’s sister. Stefanie Williams, helps with merchandising and bartending. Darrell designed and constructed a lot of the wooden features in the tasting room, and Gail assists with whatever else needs to be done.

While the couple will likely continue to add decorative elements to the tasting room and an adjacent event room, they are ready to open their doors to a larger market. Hence this Saturday’s open house, which will run from 2 to 10 p.m. A ribbon cutting is planned for 3 p.m., with live music to follow by 5 Man Trio. In addition to sharing their charming venue and product with new customers, the Keirs are curious to hear what new visitors have to say. 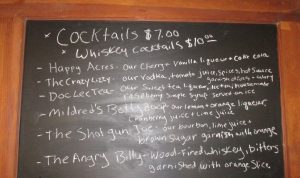 “We’ve heard lots of stories about this property since we started this,” said Jenn. Those and the tales brought down through the generations from both families often lead to names of specialty cocktails. Cherry and vanilla liqueur with Coca Cola, for example, is called Happy Acres, which was Joseph’s name for the farm. Mildred’s Betty Boop lives on as a mixture of lemon and orange liqueur with cranberry juice and a splash of lime.

Recent guests to the Keir Family Distillery included (from left) Bill, Billy and Gayle Brown from Philadelphia. They were sampling, respectively, Mildred’s Betty Boop, the Angry Billy, and a vanilla liqueur.