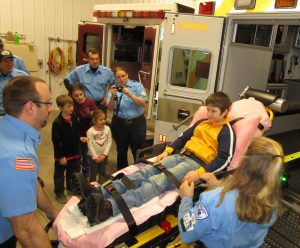 FWM Emergency Services personnel (from left) Ricky Kruder, Jeff Cappucci, Stephen Henning Jr., Crystal Thomas, Ben Thomas, Tina Henning, and Stephen Henning Sr. welcomed a number of people to their facilities in Mehoopany on Saturday to get an up-close look at apparatus, enjoy a slice of cake, and learn about the services the company offers. Above, the relative ease with which patients can be moved with a new stretcher and lift is demonstrated with Stephen Henning III portraying the patient.

Members and associates of the FWM Emergency Squad provided an opportunity on Saturday for the community that they serve and others to visit their headquarters on Schoolhouse Road and step inside the new ambulance that was put into service in November 2019. Among the guests were U.S. Rep. Fred Keller of the 12th congressional district.

The centerpiece of the open house event is the latest addition to the Mehoopany Ambulance fleet, a 2019 Horton that was custom-made in New Jersey for FWM and is brimming with features that will make the tasks of the volunteers much more efficient.

Most importantly, the new state-of-the-art stretcher and lift-system require less personnel to operate and offer a number of advantages to the crew and patients.

“We paid particular attention to the design of the new stretcher,” company vice president Ben Thomas explained. Affixed to a track on the floor of the ambulance that leads to a hydraulic lift, the stretcher is more secure than ever before for transport and can be moved to and from the ambulance by one or two people, regardless of the weight of the patient.

The new stretcher is also much more flexible, in that the head and the feet can be elevated separately. “It allows us to put them in a position of comfort,” said Thomas. “It can also be raised to the height of a bed or couch to allow for easier transition of the patient.” An oxygen bottle is secured under the head rest.

The stretcher and lift were designed with an increasing number of larger patients in mind, FWM officers related. “Before, we needed three to five people to load a heavier person,” said treasurer Jeff Cappucci.

Sturdy wing flaps on the sides can be locked at an angle to provide better body support, and the lift can accommodate up to 700 pounds. “It’s not only safer for the patient, it’s safer for us,” Thomas remarked. “It also gives us a better ride,” he added, as the newer unit cuts down on the jarring rendered by stiffer stretchers.

The interior of the cabin provides more working space and cupboards in which smaller apparatus can be secured, FWM president Tina Henning noted. The company that built and fitted the ambulance designs RVs. “They gave us lots of storage space.” There is room to soon install a small refrigerator to store cold beverages for hot days and eventually a coffee pot.

The 2007 ambulance that has served more than a decade as the company’s workhorse sits alongside the new Horton, and the comparisons between old and new are striking. Officers would like to have the 2007 truck fitted with a similar stretcher and lift, but the $61,000 price tag is a bit cost prohibitive. A 1990 ambulance that had been donated to FWM in 2006 after everything was lost to a fire was traded toward the cost of the new unit. The ambulance is paid in full, Henning related, though the company is still paying on the stretcher.

“We know we couldn’t have accomplished any of this without the support of the community,” Henning maintained. “We plan to give it back, not just by being there to provide emergency medical service but also providing the community with services like CPR classes.”

Henning related that the company has been able to make great strides in the two years since FWM’s IRS tax-free status had been reinstated. Building improvements paired with the purchase of coats and new uniform shirts have been morale boosters, she suggested.

Rep. Keller’s visit was well-received by the officers and crew, and Henning sensed that he was impressed by the dedication of the squad. “I think that can be said for all volunteers though,” she said. “He also asked how we could use his office, which actually helped us get back our 501c3 status.”

Henning shared with Keller the challenges and frustration faced by rural, all-volunteer units in recruiting younger members. “You can have all the training and equipment in the works but, if you don’t have volunteers, you can’t provide service,” she told Keller. “Potential volunteers are intimidated by the amount of training required.” 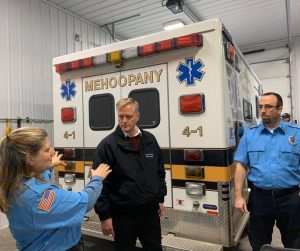 Keller thanked the FWM Emergency Service personnel for their commitment in a Facebook post after the visit and applauded them on the purchase of the new ambulance. “This addition will allow these first responders to provide more comprehensive service to their region,” he was quoted below three photos of Keller with FWM members.

On Monday, Keller told EndlessMtnLifestyles.com, “Emergency services providers are on the front lines of healthcare and safety, especially in rural areas of central and northeastern Pennsylvania where providing these critical services presents many unique challenges. In touring the district, our team has heard from a number of rural providers about obstacles and barriers they face.”

Cappucci credits much of the improvement that the company has experienced in recent years directly to the Henning and Thomas families, multiple members of each who were involved in 284 calls and more than a thousand hours in the ambulance in 2019. They logged an additional 1,000 hours keeping the interiors and exteriors of the vehicles clean and ready for duty.

Factoring in the time spent attending classes to keep up certifications and following up on claims, Cappucci added, “They do not get enough recognition for the service they provide to the community. They do it all at a great personal and financial sacrifice as volunteers.”