North Branch Logo Gets a Makeover 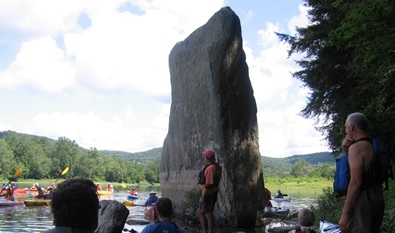 The Standing Stone, a gray sandstone monolith that stands erect on the banks of the North Branch southeast of Towanda in Bradford County was described by an officer of Sullivan’s expedition against the Iroquois in 1779. It is now a popular stop for paddlers of the North Branch.

The North Branch is jointly managed by SGP and EMHR, with SGP serving as the state appointed water trail manager for the Lower North Branch from Northumberland up to Shickshinny, and EMHR serving the same role for the Upper North Branch, from Shickshinny north to the New York border, including the Great Bend.

Water trails are recreational and educational corridors between specific locations that can be used for trips on and along waterways. They are comprised of access points, boat launches, day use sites, and—in some cases—overnight camping areas.

The development of this logo was funded by the Pennsylvania Environmental Council (PEC) and created by Graphics & Design.

“The North Branch is such a unique and valued resource to our region; however, its logo had not seen an update in many years,” said Corey Ellison, SGP Executive Director. “The updated North Branch logo will not only help to better brand the system on a local level, but it will also align it back within the Susquehanna River Water Trail system and elevate the trail on both a state and national level.”

Water trails are important to recreation and conservation in Pennsylvania. They provide active recreation opportunities including paddling, boating, and fishing, as well as positively contribute to local communities by providing economic stimulus and protecting resources that are important to the quality of life of Pennsylvania residents.

SGP and EMHR serve as two of four water trail managers for the entire Susquehanna River Water Trail within Pennsylvania. Among other tasks, SGP and EMHR work with partners along the trail to develop and maintain their sections of the water trail, improve user experience and safety, and handle issues and concerns along the water trail.

The Endless Mountains Heritage Region (EMHR) is a nonprofit membership organization, proudly serving the area encompassing Bradford, Sullivan, Susquehanna, and Wyoming Counties. Known for their unmatched pastoral landscapes shaped by centuries of farming and timbering as well as land conservation, the EMHR embraces its agricultural theme of “Living with the Land,” and its mission to “maintain and enhance the unique rural character and culture of the Endless Mountains.”