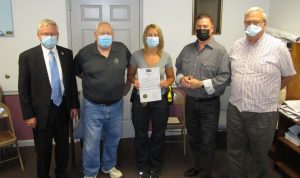 A construction project in Nicholson started several years ago by the Wyoming County Housing & Redevelopment Authority (H&RA) that seemed hopelessly stalled appears to be back on track but with a different mission. The 18 units were initially supposed to be sold to low- to moderate-income families, but the commissioners feel that the cost was too high and the work was taking too long.

H&RA is in the process of transferring the homes to Trehab and have been working with director Dennis Phelps to instead provide homes for senior citizens for whom few housing options are accessible in the county. “We’re really looking forward to having this housing available for the elderly” said commissioner Ernie King, who represents the commissioners on the H&RA board. A retaining wall needs to be completed and a fence extended before Trehab takes the reigns, which is expected to happen within three weeks.

They had been considering hiring another full-time employee for the Elections Office but feel this move will save the county some money in light of expected tax shortfalls. The Salary Board will need to convene to determine the pay rate for the new hire since the two positions are technically different entry levels.

Flo Kellett, director of voter registration and elections, was on hand to convene a session of the Election Board to discuss a request to move the Mehoopany Township polling location from the firehouse to the township building on Schoolhouse Road.

Mehoopany Township supervisor Loren Day joined the meeting by phone and told the commissioners that he wasn’t sure why 37 people had signed a petition to get the poll moved to the township building, which Darling maintains does not offer adequate space for either parking or safe-distancing like the firehouse does. He had fielded two complaints from voters who said the firehouse wasn’t clean.

When Kellett confirmed with commissioner Rick Wilbur that there was ample time to make a definite decision before the general election in November, Wilbur suggested tabling the conversation until more information could be gathered. “We need time to look at it properly,” commissioner King agreed.

Commissioner Tom Henry recently attended a meeting of the Luzerne/Wyoming Counties Drug & Alcohol Board where an uptick in suicides was addressed. The COVID-19 health crisis was cited as the catalyst for increased stress and depression, as well as isolation from counselors. Commissioner Wilbur suggested that virtual meetings are not sufficient for those at serious risk.

Commissioner Henry also reported that he had returned to Roadside Rest Park in Eaton Township to expel people using the park illegally since it has been closed. He put up No Trespassing signs after the State Police informed him that they could not enforce the law there until signs were erected. Wilbur noted that additional signage in Spanish will also be put up soon and that the Conservation District and county planner Lynnelle Farber are working on ideas for the park’s eventual reopening.

Last weekend’s electronic recycling event at the county’s recycling center in Tunkhannock Township went very well, Wilbur reported, with traffic backed up onto Route 92 for a period of time. In the meantime, the center will maintain Saturday hours of 7 am to noon, but containers will remain inside the gates because people have been leaving non-recyclable garbage at other facilities in the county. Commissioner Wilbur noted that Procter & Gamble has partnered with the county to send its glass and plastic recyclables to the center to help increase volume. Subsequently, P&G PR director Jose De Los Rios has joined the county’s Waste Management Board.

County 911 director Jeff Porter sought approval from the commissioners to accept a grant for $52,780 that will cover the costs of improvements to an emergency communication tower on Brier Mountain in Monroe Township to enhance service in the Noxen area, new security access cards and computer software for the 911 building and tower sites, and a new training console at the 911 center.

Director of probation Krystle Kowalczyk was on hand for the reading of a proclamation marking July 19 to 25 as “Pretrial, Probation and Parole Supervision Week” in Wyoming County and to detail the use of a $51,000 grant she secured. The funds are focused on COVID-related expenses incurred by the county, including laptops for zoom meetings requested by the district attorney’s office and $15,000 for COVID test kits for the prison.

After agreeing during the prison board meeting held earlier in the morning that temporary safety measures at the Wyoming County Correctional Facility would be maintained until further notice, Commissioner Wilbur said that department heads at the courthouse and other county offices had also agreed that entry by appointment-only and other COVID-related protocol should be continued for the foreseeable future.

The commissioners will continue taking applications for the COVID Relief Block Grant program through Friday, Aug. 14. Commissioner Wilbur noted that $2.4-million has been received by the county and deposited in a dedicated account. As of this morning, 123 applications had been requested and 57 returned to the courthouse. Businesses with less than 100 employees, non-profit and veterans organizations, and tourism businesses are urged to apply. Municipalities can recoup some COVID-related expenses such as money spent on safety modifications. Read more about it here: http://www.endlessmtnlifestyles.com/?p=16406