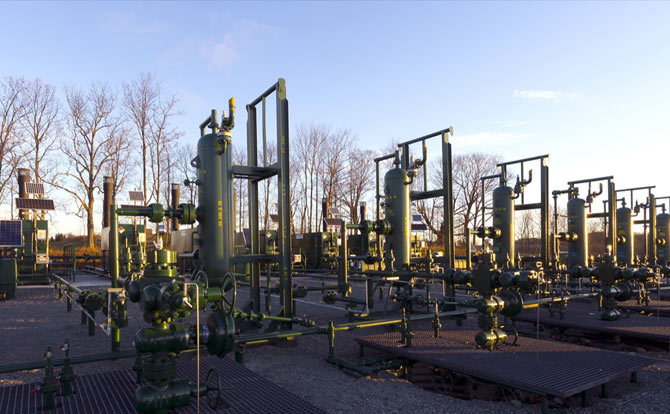 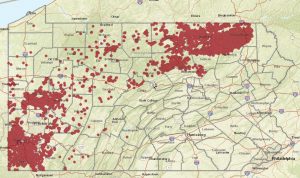 The concentration of active natural gas wells in Pennsylvania, shown as red dots on the map above from www.depgis.state.us, shows the continued proliferation of natural gas production in the Endless Mountains.

Natural gas production in Pennsylvania reached an all-time high in August, and Susquehanna County is in the lead. According to the August report issued by the PA Department of Environmental Protection (DEP), 44 percent of the natural gas being produced in the Commonwealth is coming from the Endless Mountains (Bradford, Sullivan, Susquehanna, and Wyoming counties). What is even more impressive is that more than four percent of all the natural gas in the United States is coming from Susquehanna County alone.

“That’s pretty awesome,” said Susquehanna County Commissioner Alan Hall of the latest figures. “We’re excited to be back in a boom again and reaping the benefits.”

“We are impressed by the increase in natural gas production regionally,” Progress Authority economic development specialist Chris Brown concurred. “We continue to work with our partners to attract value added projects that will utilize this natural resource before it leaves our region.”

“Cabot is proud to be the driving force behind these impressive numbers in Susquehanna County that go on to reinforce energy dependence here in Pennsylvania,” said George Stark, COG director of external affairs.

Statistics released by Oil and Gas Republic indicate that COG and Southwestern Energy (SWN) enjoyed similar growth in the last quarter at 171 million cfpd each, with SWN boasting a slightly higher growth percentage for the year with a 25.3 compared to COG’s respectable 21.6 percent increase in production.

“Growing, investing and operating Susquehanna County is an absolute privilege, and we’re proud of the continued success that we continue to make working alongside local businesses, landowners and many other community stakeholders,” SWN senior government community affairs manager Mike Narcavage stated. “We’re grateful to be part of this community and to contribute to the region’s and the nation’s economic, environmental and progress toward energy security.”

At the end of August, COG had 15 of the 20 leading wells in the state, all of them in Susquehanna County. At the top of the list is one of eight wells on the Jeffers Farm in Harford Township, pumping out 38.6 Mmcf (million cubic feet) per day. Other big producers are located in Springfield, Brooklyn and Jessup townships.

“We wish the gas prices were a little higher, but royalty owners are making some money again and investing in their futures,” Commissioner Hall remarked, adding that the extra income allows for the purchase of new vehicles, farm equipment and home improvements. “It’s a nice trickle-down effect.”

The enormous success of gas companies working the Marcellus shale along Pennsylvania’s northern tier also translates to an economic boost that businesses and residents in New York’s southern tier are missing due to the ongoing moratorium there against hydraulic fracturing of wells.

Hall related that the increase in activity and profits is evident in store traffic and full restaurants. In addition to the companies that provide direct support to the gas industry, such as water haulers, those constructing gas sites, and diesel fuel providers, Hall continued, hardware stores and business that rent out equipment, and provide protective clothing and gear, security services and traffic control also get a boost from increased activity. “All those people get to prosper too,” said Hall.

On the other hand, it is the task of the Progress Authority to help the industry evolve simultaneously in the opposite direction. “Much like making cabinets from our hardwoods or making cheese from milk, the effort to add value to the gas will give our area the best return on investment for our local economy,” said Brown.

According to statistics at the US Census Bureau website, the median household income in Susquehanna County rose by 20.5 percent from 2009 to 2016. Comparatively, median income in Broome County, NY, just over the border, rose only 9.3 percent in the same time period and now lags 4.8 percent behind Susquehanna County.

“We hope to ride it as long as we can,” Hall said of the current boom.

Susquehanna County is expected to stay king of Pennsylvania production over the next few years as new pipelines like Williams’ Atlantic Sunrise and UGI Services PennEast pipeline move natural gas to market. The Williams’ line that went into service in October at a cost of #3 billion will provide enough energy for seven million homes. The $1 billion PennEast line, which is currently working through regulatory review, will supply enough energy for 4.7 million homes.