More than a hundred guests attended the ribbon cutting ceremony for the new Susquehanna County Safety Center on April 29. County commissioner Alan Hall (below) said in his opening remarks, “It is a great day for Susquehanna County.” A decade in the making, the new 42,000 square foot facility brings many safety-related departments together in three buildings on 17 acres of donated land. 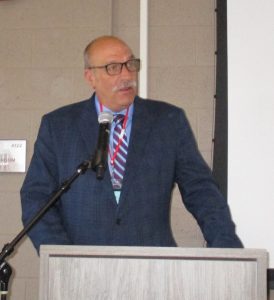 State-of-the-art is an understatement for describing the enormous amount of technologies and planning put into the project that will allow those who work there ample space to perform their duties efficiently, safely and securely. For example, the local district magistrate was moved there from New Milford, and her suite provides rooms to help police, sheriff and corrections officers, and attorneys keep clients separated until it is time for them to see the judge. A key-fob ID card is needed to go through any door in the complex. 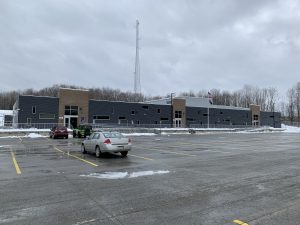 The Safety Center was only recently opened when it was put to and passed its first major test. A freak spring storm dumped more than a foot of heavy, wet snow on the county. Downed trees and utility wires resulted in more than 70 percent of county residents and business being without power for as long as five days. In addition to providing a warming and charging station for dozens of nearby families, massive backup generators allowed 911, EMA and other emergency officials to seamlessly maintain needed services.

At the height of the disaster, 911 dispatchers were fielding 1,000 calls per day, which would generally be spread out over a month. Hall noted that the old center would never have been able to handle such a call volume, or they would have been seriously delayed. Residents were appreciative of being able to get something to eat and take a shower, the latter a perk as well for employees spending long hours on site.

Most important to the commissioners, who worked with department heads to make sure that the design would meet their respective demands for at least the next 50 years, the Susquehanna County Safety Center did not and will not cost the taxpayers any money. The majority of the project was paid for with Act 13 funds, also known as the impact fees paid by energy companies like Coterra Energy and Southwestern Energy that work in the area. “There is no way that we could have gotten this done if the gas industry did not come to the county,” Hall stated. 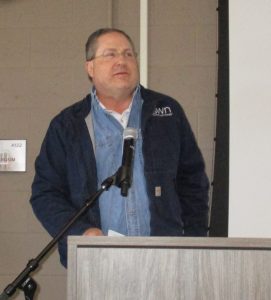 The commissioner personally thanked Coterra external affairs director George Stark and Dave Bert (above) of SWN and asked them both to say a few words. While they agreed that they take pride in “amazing projects like this” being part of the “legacy” they leave behind, they also commend the county for its financial stewardship in making sure that Act 13 funds go where they are needed most. 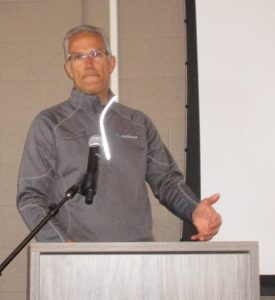 “We applaud all of those involved for a collaboration that exceeds expectation. They have certainly made Susquehanna County a safer place to live and work,” Stark (above) stated, congratulating the county as well for winning the Commercial Project of the Year award (2021) for the new facility from the Pennsylvania Aggregates and Concrete Association.

Commissioner Hall remarked that no one ever hopes to be in a position to need the amenities offered at the facility. “But, if you ever do,” he said, “we are confident that we can provide the services that you require.”