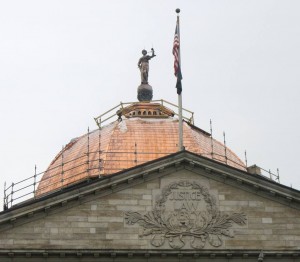 Warden Don Stewart of the Bradford County Correctional Facility reported on Oct. 13 that a new inmate phone system is “up and running” at the facility, though some fine tuning is needed. “The new system will be beneficial to other law enforcement agencies,” Stewart related. “They can get records of calls.”

A Towanda reporter asked if both incoming and outgoing calls could be monitored. Stewart noted that the prisoners do not receive phone calls.

The supervised bail program continues to show promise with 19 new placements last month, almost half of them referrals from Domestic Relations Office.

Judge Maureen Beirne explained that many of the DRO referrals were individuals who have not paid their child support. In lieu of incarceration, they are placed on supervised bail. DRO offenders represent 37 of 83 people in the Bradford County Prison system currently participating in the program.

“With some supervision, they can look a little harder for a job and pay their child support,” said Beirne. “It’s actually doing very well.”

Nonetheless, the prison remains full at 194 inmates, just above the monthly average in 2016 of 187 prisoners. Ten inmates are currently at other facilities for hearings and other court dates. One is in Tioga County for security reasons. No additional costs are being accrued for those in other institutions.

Under the heading of Extraordinary Experiences, two prisoners were placed on “constant watch” in September due to medical and mental heath issues. One inmate had stabbed himself in the hand. A new commitment brought in by the PA State Constable was transported to Towanda Memorial Hospital for a possible stroke, then released on supervised bail.

Six inmates have been working outside the prison, four of them as part of a Community Work Force Program crew. They are currently working in Wyalusing on fall cleanup projects and South Waverly on leaf pickups. Prison workers have been requested by Athens Township for a project at Round Top, and they will be working at the Troy Sale Barn. CWF workers have done work at both locations previously.